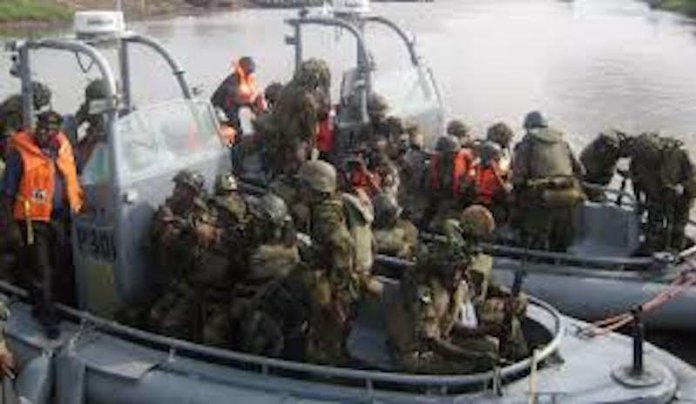 The Nigeria Navy said its patrol team of the Operation Base (FOB), Igbokoda, Ondo State, has intercepted six boats loaded with over 100,000 litres of Automotive Gas Oil, popularly known as diesel along Ondo/Lagos coastal axis.

The Commanding Officer of the FOB, Navy Captain Shaibu Mohammed Ahmed, who paraded the suspects, said some of the boats seized by the Navy were full of empty drums.

He said the suspects were arrested on January 13 at about 4pm along the open sea channel.

He said, “In order to effectively curb illegal oil bunkering, sea piracy, kidnapping and other criminal activities in Ilaje and Ese-Odo Local Government Areas of Ondo State, the Forward Operating Base (FOB) of the Nigerian Navy in Igbokoda, instituted a continuous surveillance on the creeks and coastal areas.

“This effort yielded positive result, with the latest operation carried out along the Ondo/Lagos coastal axis.

“The FOB has been professionally carrying out its constitutional responsibilities since inception in efforts to secure and curb all forms of illegalities such as illegal bunkering, piracy, sea robbery and kidnapping within Ilaje and Ese-Odo LGAs.

“On this note, I am appealing to the general public, especially the communities where we operate, that security of lives and property is no longer one-man business.

“Therefore all hands must be on deck because the military or security agencies cannot do it alone, the communities are requested to provide the base with meaningful information to curb all forms of economic sabotage.”

Some of the suspects who spoke said they were hired to use their boats to convey the products, while others admitted their involvement in the illegal business.