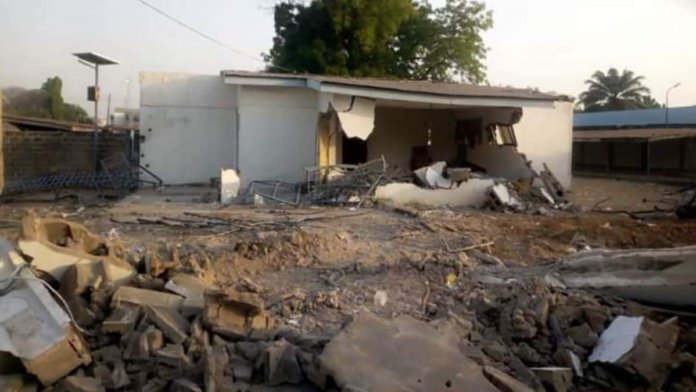 It is exactly one year on January 2, 2021 that the Kwara State Government took official possession of a portion of land otherwise known as Ile Arugbo or Ile L’Oke, depending on which side of Kwara politics one may belong to. Until the takeover, the land housed some shelters where the late Senator Olusola Saraki, and later his children, gathered their political followers to share largesse of various kinds. That facility until recently was notorious for annual stampedes and mysterious deaths of hundreds of people, mostly the aged.

The days leading January 2, 2020, the very day the land was taken over by the government, were charged. Precisely on December 28, the government issued a statement announcing the reclamation of the land from a firm, Asa Investment Limited, which is purportedly owned by the late Saraki on the ground that the land belonged to the government, was meant for construction of a secretariat, but was dubiously gifted to the firm without a dime paid to the public coffers or any document lawfully transferring its ownership to any private person. On December 29, Senator Bukola Saraki fired back, accusing the government of witch-hunt and unfairly targeting his family. But much more instructive was Senator Bukola Saraki’s claim in his statement that the land lawfully belonged to his father, that they have documents to back their claim to the land, and that they were going to court to reclaim their inheritance!
I found a few things curious about the Asa Investment Limited: it ceased existing decades ago after it was struck off the record of the Corporate Affairs Commission due to dormancy and non-payment of dues. Its shareholders and directors died many years ago. A shocker: no Saraki was ever a shareholder in the firm while it existed, yet Sarakis are laying claim to it and the public land purportedly gifted to it. My verdict: Asa Investment Limited existed only as a conduit for suspicious activities.

A cardinal argument of the Sarakis was that they had a lawful claim to the land which they were ready to prove before the court. Every analyst, legalist, and columnist who took positions on the celebrated matter hinged their arguments on the existence of a right of occupancy or certificate of occupancy which the Sarakis said they possessed. Everyone waited to see the star document produced before the court. The case the Sarakis filed had since begun in court. However, exactly a year after, at no time have the media reports on the matter from the court revealed how the Sarakis have now produced the document showing their ownership of the land to counter government’s claim that what the Sarakis did was to convert public land to their family inheritance.

At a point, rather than produce the right of occupancy document, the media reported how Sarakis were mobilising community leaders to resolve the matter out of court. The court, apparently not seeing any document, at some point advised both parties to find amicable solutions to the logjam. That did not happen. Then parties returned to the court. Sarakis refused to open their case, they refused to bring documents or witnesses to prove their case. Instead, they constantly sought adjournments after adjournments. On August 6, 2020, the court officially lifted its injunctions restraining the government from erecting any structure on the land. The court went ahead to fine the Sarakis for clearly wasting the time of the court. That signalled something: the court already knew there was no res to be destroyed anymore. The court, in good conscience, could no longer restrain the rightful owners of the land, the government, from using its land.

Of course, Sarakis would take none of it. They later asked the judge to recuse himself from the case because he lifted the temporary restraining injunction. On December 26, not wanting to set a bad precedent, the court struck out the request for the judge to stand down. There is no merit to the argument, the judge held. Of course, the case will continue.
One year after, the Sarakis have not substantiated their claim of ownership to the land. While we wait for them to do so, there are lessons to take away. One, we must be slow to take positions against government’s decisions. Two, there is something strange about the Sarakis of Kwara: they have a very annoying sense of entitlement. Whether in his body language or utterances, Bukola Saraki still believes Kwara is his inheritance. His statement on Ile Arugbo on December 29, 2019 had entitlement written all over it. Today, his claims have proven to be false. When he recently came to Kwara purportedly for his father’s remembrance prayers, his carriage suggested a man totally ignorant of why people got tired of him. I do not pray he or his lackeys ever learn the whys.

There is something else to note. Apart from the annual death rituals associated with it, Ile Arugbo represented some of the most backward features of Kwara under the Sarakis. It is gratifying to note that the characteristic gathering of old people who queued to collect N200 and food has disappeared. While it is open for improvement, the social investment programme of Governor AbdulRahman AbdulRazaq with a component that gives elderly people some bi-monthly government grants to support themselves is a decent and much more humane replacement for the practices in Ile Arugbo. This is so for three reasons: there is no pretence that AbdulRazaq is using his personal money to take care of these elderly, vulnerable people. Also, this stipend is paid to them at their doorsteps. This is contrary to them being bused under the most dehumanising conditions to go collect N200 from a politician who claimed he was doing so from his own private pocket. Finally, government’s social protection for the poor is a major policy advice by various global development bodies to stem the tide of extreme poverty and hunger.

Some persons have called the social investment cosmetic and unsustainable. Apart from them missing the point, these critics are hypocritical because they were in fact known foot soldiers of the Sarakis. Condemning an institutionalised support for the elderly while looking away when the same senior citizens were dehumanised at Ile Arugbo is the height of hypocrisy no one should listen to.

Finally, in the spirit of the essence of this article, one truly hopes to see that document that proves Sarakis’ ownership of the land. As a Kwaran, I know this document will never come. But much more important is a need by every patriot to ensure that our state is forever rid of a repeat of the era of Sarakis again. Even without them in the saddle, it would take decades to regain what the state has lost.
––Alabi, a political scientist, writes from Ilorin.