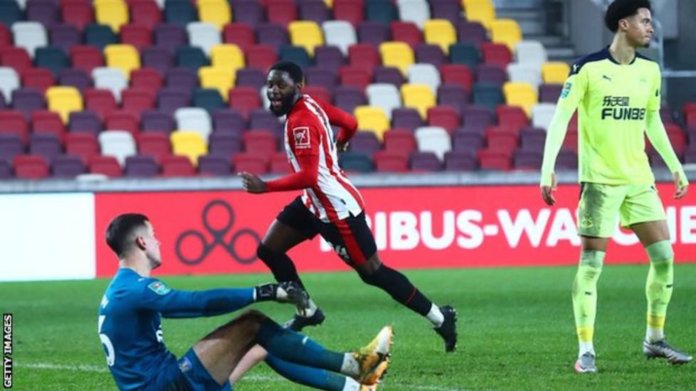 Brentford reached the semi-final of a major tournament for the first time with a fully deserved 1-0 victory over Premier League side Newcastle United in the Carabao Cup yesterday.

Thomas Frank’s in-form Championship side came into this quarter-final on the back of a 13-match unbeaten run and missed a host of good chances before man of the match Josh Dasilva put them in front with a crisp, left-foot volley after 66 minutes.

It was the breakthrough the Bees merited as they dominated, with Saman Ghoddos hitting the bar and Sergi Canos heading wide with the goal at his mercy in the first half.

Callum Wilson threatened briefly for visitors Newcastle but all the urgency and progressive football came from Brentford, who made six changes from their weekend win over Reading, including leaving the second tier’s top scorer Ivan Toney on the bench against his former club.

In the surroundings of their new Brentford Community Stadium, Frank and his players demonstrated how well they have rebuilt from the bitter pain of defeat by Fulham in the Championship play-off final and the loss of key players.

This game could have been over in the first half had Brentford taken those opportunities, but it was no more than they deserved when Dasilva finally broke the deadlock.

The Bees are back in the top four in the Championship, three points off the automatic promotion places, and are shaping up once more as serious promotion candidates.