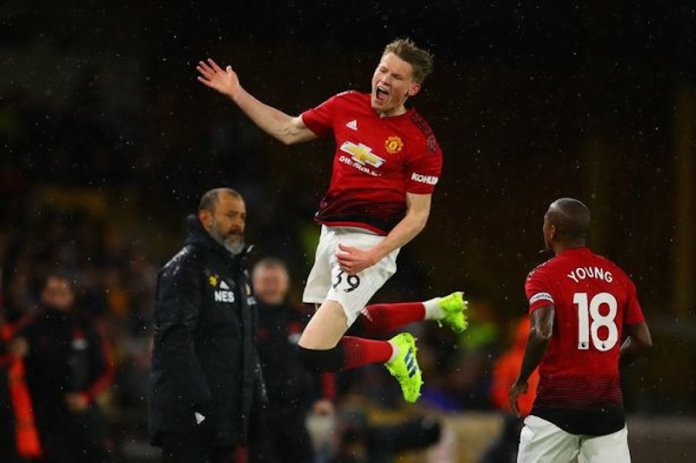 Scott McTominay on Sunday became the first player to score twice inside the first three minutes of a Premier League game as Manchester United climbed to third in the table with a remarkable victory over old rivals Leeds at Old Trafford.

The midfielder found the bottom corner with a ferocious drive after just 67 seconds, before doubling his tally moments later with a clever finish from Anthony Martial’s pass.

Bruno Fernandes and Victor Lindelof increased the home side’s lead, with Liam Cooper’s header reducing the arrears at the end of a pulsating first 45 minutes.

Daniel James broke clear of the Leeds defence to restore the hosts’ four-goal advantage 20 minutes into the second half, before Fernandes added his second of the game from the penalty spot after Martial had been tripped by Pascal Struijk.

Stuart Dallas curled home a stunning second consolation for Leeds – a fitting end to one of the games of the season that included 43 shots.

The victory lifts Ole Gunnar Solskjaer’s side above fourth-placed Everton on goal difference, while Leeds remain seven points above the relegation zone in 14th.

Manchester United’s success on their travels has been in stark contrast to their poor Premier League form at Old Trafford, where they had won just once in the league all season coming into this game.

Remarkably, Solskjær’s team had managed just three league goals at home this term – despite netting at least three in all six away wins.

The Norwegian could not have wished for a better start from his team on Sunday, however, as McTominay stunned the visitors with two marvellous early goals.

The Scotland international, who had only netted six in his previous 68 appearances for the club, broke the deadlock with a fierce drive into the bottom corner after being teed up by Fernandes – the hosts’ first home league goal from open play since the first weekend of the campaign.

Barely a minute later, the midfielder latched on to Martial’s through ball before producing a finish the Frenchman would have been proud of.

It was 3-0 on 20 minutes, Fernandes reacting quickest to Luke Ayling’s challenge on Martial before slamming a powerful strike past Illan Meslier.

Lindelof capitalised on some dreadful Leeds defending from a corner to rub further salt into the visitors’ wounds, before Cooper’s header from a corner reduced the arrears.