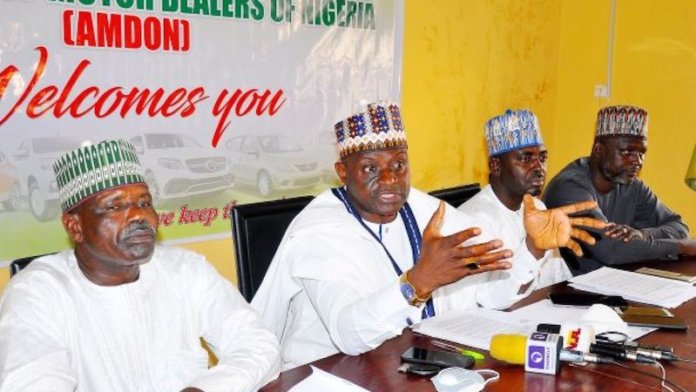 James Emejo in Abuja
The Association of Motor Dealers of Nigeria (AMDON) has urged the federal government to request for a delay in the implementation of the Proposed ECOWAS Fuel Grade and Vehicle Emission Standards Regulations, which is expected to be in operation from January 1, 2021.

The association further asked the government to independently review perceived errors in the regulations and address them to provide accurate assessment of the multi-billion-dollar costs and benefits, particularly in the light of the current financial stress occasioned by the COVID-19 pandemic, instability in the global oil market and recession.

Addressing journalists at a media briefing in Abuja over the weekend, National President of AMDON, Mr. Ajibola Adedoyin warned that the proposed ECOWAS directive would not only hurt the Nigerian economy, but also further impoverish Nigerians.
He said the government should first develop a realistic implementation and funding plan for the costs to avoid a disappointing failure later in achieving the targeted environmental goals.

He added that a proper review of the policy by the federal government would also help to avoid undermining the competitiveness of domestic refiners.

The proposed fuel and emission standards policy is a decision by ECOWAS Ministers in consideration of the final report by the ECOWAS consultant which had recommended new fuel and diesel specifications and vehicle emission standards for member countries.
Earlier in September, the national Heads of States further endorsed the policy at a meeting in Niamey, Republic of Niger.
Essentially, the directive seeks to among other things, restrict the importation of passenger vehicles of no more than five years old and heavy duty vehicles of no more than 10 years old.

The association however warned that, “The implementation of this regulation will have significant negative socioeconomic consequences for Nigerian consumers, along with minimal environmental and health benefits”.
Adedoyin said the planned implementation will, “lead to a huge increase in the cost of imported used automobiles and fuel prices, at a time of economic uncertainty and recession, if the Nigerian government goes ahead with the implementation of the regulation, as proposed”.

According to him: “Further assessment of the proposed ECOWAS regulations as recommended by ICCT has revealed many errors and inconsistencies.
“While the ECOWAS consultants submitted in their report that the implementation will result in net benefits to society to the value of $107 billion between the period of 2019 to 2050, a preliminary independent analysis has determined that the $107 billion net benefit presented in the final report is incorrect.

“In fact, the implementation of the ECOWAS regulations will have a net cost of $78.1 billion, with approximately two thirds of the net cost impacting Nigeria negatively.”

He said: “The ECOWAS regulation can be likened to a total ban of vehicle importation as no one will be able to afford such vehicles, except for the privileged few which consist of less than 0.5 per cent of our population. The adverse effect of the regulation can only be imagined.”

According to him: “While the consultant’s final report assumes the cost of newer vintage vehicles is $297 per automobile based on incremental cost of improved vehicle emission control system, findings reveal that the estimated cost of purchasing newer vehicles is a whopping $11,065.

“This does not include the significantly higher cost in replacing diesel vehicles which are the major source of pollution.”
He said: “While the report did not consider the huge incremental technology cost and incremental operating cost of implementing the regulations, a preliminary independent study had placed such costs at $106.4 billion and $10.7 billion respectively, which will further place a huge burden on Nigeria’s already stressed foreign exchange.”