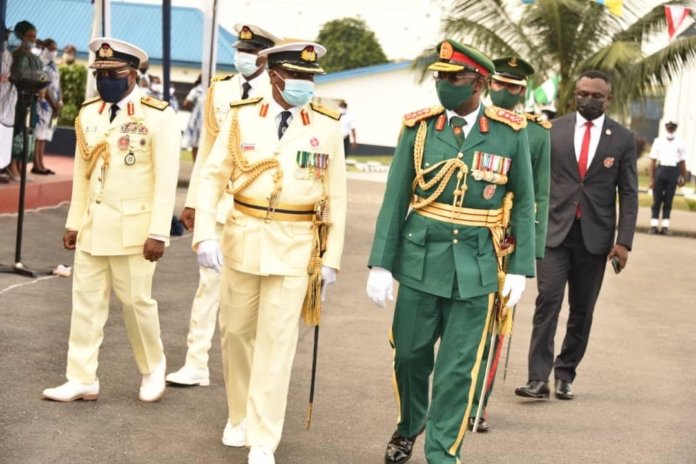 World over, security threats keep evolving from traditional to conventional warfare. In the maritime domain, the same rings true. In the past, the maritime domain was threatened by piracy, sea robbery, illicit trafficking, narcotics and arms smuggling, illegal, unreported and unregulated fishing (IUUF) and marine pollution.

Now, emerging security threats within the Nigerian maritime domain stem largely from non-military causes such as socio-economic agitations and unemployed youths within the coastal communities, which are manifested through attacks on shipping, sabotage of hydrocarbon infrastructure and maritime resource theft.

For the Nigerian Navy (NN), in addition to assisting sister services in the North-east operations against the Boko Haram insurgents, it has continued to spearhead internal security operations in the Niger Delta Region against militancy, piracy, sea robbery and crude oil theft.

Thus, to boost efforts of the Armed Forces, particularly the navy to tackle the multi-faceted security threats, the Nigerian Navy recently commissioned 108 officer cadets of the Direct Short Service Course 27.

Review
In his address, the reviewing officer, Chief of Defence Staff, General Abayomi Olonisakin, said these crop of young men and women from different backgrounds, were carefully selected among eligible Nigerians for enlistment into the Nigerian Navy.

He said: “It is pertinent to mention that the military service is operating in a growing complex and ambiguous environment that are difficult to contend with. Accordingly, our nation and indeed the entire Gulf of Guinea, has in the last few years been challenged by asymmetric and emerging security threats emanating from insurgency, militancy, economic sabotage and anti-democratic forces.

“The COVID-19 Pandemic and civil unrest have further demonstrated the fluidity and mutating nature of human security. Apparently there are no quick fixesto effectively combat the security challenges bedevilling our dear nation.

“It is therefore germane to appreciate the untiring support of Mr President, Commander in Chief, His Excellency President Muhammadu Buhari, as he continues to demonstrate the resolve and full support for the Armed Forces through the resourcing of operational requirements and personnel welfare. It is against this backdrop that His Excellency recently approved the increase in the manpower intake of the Armed Forces to comprehensively tackle the multi-faceted security threats across the nation.

“I am equally glad to note that in addition to assisting sister services in the North East operations against the Boko Haram insurgents, the Nigerian Navy has continued to spearhead internal security operations in the Niger Delta Region against militancy, piracy, sea robbery and crude oil theft. It is therefore of utmost necessity that the Nigerian Armed Forces continuously build institutional capacity through effective, systematic and robust training matched with the requisite capabilities to defend the territorial integrity of Nigeria from both external and internal aggression.”

He urged the passing out cadets not to relent on their oars as they begin their career in the service to their fatherland.

“These challenges call for dedication, selflessness, professionalism and chivalry as you have discovered during the course of your training. Let me quickly add that on its part, the federal government is committed to improving the welfare and operational requirements for members of the Armed Forces as they tackle the multifaceted security challenges across the nation,” he added.

“The Commander-in-Chief also expects you to be focused on your assigned duties to maintain peace and avoid actions that would bring disrepute to the Nigerian Navy and the Nigerian Armed Forces in general. I also urge you to justify the huge resources that are committed for your training and your personal sacrifices to make the Nigerian Navy proud.

“One way you can do this will be by drawing from the knowledge and competence gained from the training in your future assignments. I am optimistic that your performance in the field would attest to the hard earned reputation of the Nigerian Naval College Onne as one of the citadel of excellence in military training.”

Earlier on, the acting Deputy Commandant, Nigerian Naval College Onne Port Harcourt, Commander Buhari Ibrahim Hadi, who delivered the course highlights, said as the center for excellence on ab-initio training of cadets, midshipmen and Under Training Officers, the Nigerian Naval College has remained committed to producing professional officers with the highest standard of military bearing.

He said: “The Direct Short Service Commission Course, which the Cadets have just completed, is one of the navy’s enlistment schemes designed to enroll career professionals from various fields and instill in them the requisite military bearing and naval knowledge required to function optimally as commissioned officers.

“The Direct Short Service Commission Course 27 was inaugurated on March 27, 2020 with 109 cadets from all states of the federation including Federal Capita Territory Abuja. However,13 cadets were withdrawn on medical grounds but were subsequently replaced by other candidates from same states. Sadly, one cadet passed away during the course of the training.“

On the training curriculum, he said it spanned a duration of about nine months, covering three phases namely; Professional, Security and Operations, Leadership and Management Phases.

“Instructions during each phase were in forms of classroom instructions, outdoor instructions, presentation and study visits. The cadets were also subjected to parade training, swimming lessons, boat handling as well as other forms of physical training.

“On the conduct of the course, the Direct Short Service Commission Course 27 was conducted in line with Naval Training Command Curricula for Courses Conducted in Nigerian Naval College 2020. The Training was conducted using various instructional techniques.

“The first two weeks of reporting, cadets were placed on isolation and medical checks in line with the NCDC guidelines for prevention of COVID-19 spread. Thereafter training commenced with the Induction Weeks during which cadets were subjected to intensive physical training.

“This was aimed at developing the physical and mental stamina needed to see them through their training at the college. They also received introductory lectures on Time Management, Interpersonal Relationships, Salutations and Mark of Respect.

“On completion of the Induction Weeks, the Cadets progressed to the Professional Phase of the Course. Instructions covered during the Phase included; Navigation, Seamanship, Communication, Rules of the Road, Chart Work, Medicals, Ship Administration, Logistics and Accounts and Budget, to mention a few. The next phase was the Leadership and Management Phase.

“Instructions covered during the Phase included Ship Administration, Mentorship, Leadership and OOD/OOW Duties. The last phase was the Security and Operations Phase. During the Phase, resource persons were invited to make presentations on General Introduction to Maritime Operations, Contemporary Operations, Maritime Domain Awareness, International humanitarian law and Cyber Security including the role of the media in military operations.

“The training also covered Parade Training, Physical Training, swimming, as well as practical sessions onboard NNS JEBBA. The conduct of the training was not complete without educational visits and tours to Army, Navy and Air Force units and formations in Port Harcourt, as well as other security and maritime-related agencies. Notably, Nigerian Customs Service, Nigerian Immigration service, Charkins Maritime Academy amongst others.

“It is worthy of note that the operational training usually done at the Nigerian Army Amphibious Training School Calabar for DSSC cadets, for the first time was conducted in the Joint Maritime Security Training Center (JMSTC) Ojo Lagos.

“This accorded the cadets opportunity to visit various ships and formations within Lagos area. They also witnessed the operational readiness of the military formations visited, as well as improve their understanding of the synergy between maritime-related agencies and the NN.”

He disclosed that the cadets were assessed on a total of 31 subjects and they met all the requirement both in character and learning for commission into the NN.

On the improvement made, he said it is noteworthy to state that the college have made some remarkable improvement on the course which previous courses did not benefit from.

“These includes; 2Range Classification Exercises as against 1, also for the first time in the history of any DSSC a Commissioning Board was put up by the college to further improve on the cadets training and also to examine their level of assimilation of what they were thought.

“Also, for the first time in the history of this college, three new interactive smart boards were installed in the three classrooms, which to a very large extent improved on the teaching aids and training facilities in the college in line with best global practices. Also, the three training boats procured by the CNS has also made boat handling training more interesting and intensive.”