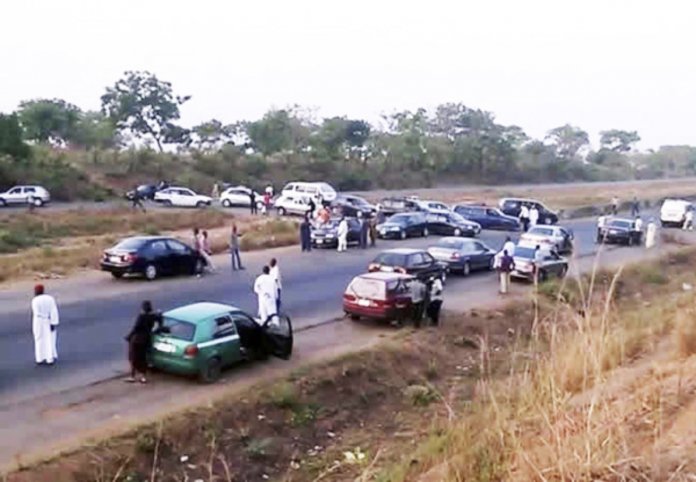 A fortnight ago, dare devil kidnappers had a successful outing on the Kaduna – Abuja highway. These kidnappers stopped motorists, kidnapped victims and killed those who attempted to escape. According to the villagers who reside around the dangerous road, “the kidnappers had four successful operations with many passengers losing their lives and countless victims taken into the kidnappers’ den”. The return of the kidnappers on one of the nation’s busiest roads is unfortunate and sad. It has come at a time when people are calling on the authorities to bring to an end the abduction of helpless passengers plying the road on daily basis. The response of government on the Kaduna-Abuja road is not encouraging. Although, the government deployed some anti-robbery squad in some strategic positions which allayed fears among the people, their presence has failed to checkmate the activities of kidnappers.

The government should go beyond stationing police officers in every one or two kilometers of the road. Instead, there is the need for the deployment of modern technology such as drone which will monitor the movement of these kidnappers and locate their hideouts. The audacity with which these kidnappers carry out their attacks and abduct their victims raised a fundamental question: Are Nigerians safe? If this road that links North- West states to the nation’s seat of power can be frequently attacked by kidnappers with relative ease, other roads in the country are no go areas. Even with the return of train transportation which proved effective and safe, the kidnappers often attack train stations, scare and whisk away many victims. Can we attribute the increased rate of kidnapping activities to the recent EndSARS protest that demoralized our men in uniform and kept them off the roads? It appears that some police officers are yet to recover from the aftermath of the bloody #EndSARS protests that rocked the country.

While the Kaduna-Abuja road was recently deserted by travellers due to the activities of kidnappers, so also is the Katsina – Zaria road when the bad news of abduction filtered into the air. The Nuhu Bamalli Polytechnic community in Zaria was thrown into confusion and sadness. Kidnappers forcefully entered the staff quarters, fired shots into the air and abducted a lecturer. In ABU community, these kidnappers also kidnapped a lecturer with his wife. Nowadays, this has become the trending news both in social and conventional media. What is really happening with our intelligence gathering? The kidnappers who operate along Kaduna and Abuja road are usually spotted in Gadan malam mamman and Rijana axis. They have been operating there for long. In saner climes, these areas must have been combed and those making lives difficult for others arrested. However, the kidnappers are becoming more audacious, taking advantages of our fragile security network and operating with little resistance.

It has become imperative for government to strengthen its intelligence gathering mechanism, adopt community policing and above all deploy modern security gadgets such as drone and helicopter for effective policing. Kidnapping is taking a dangerous dimension and government should move swiftly and contain it before it consumes the country.