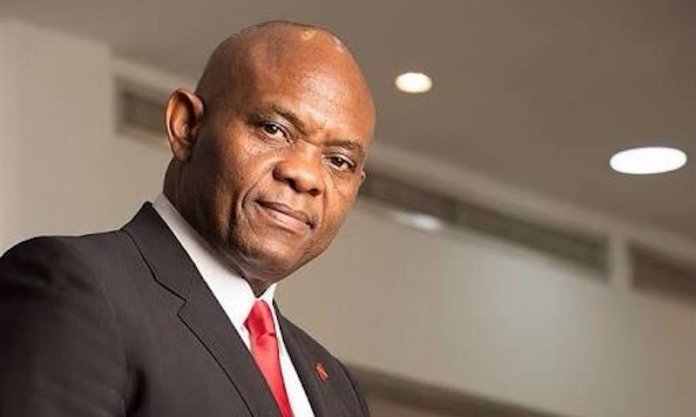 Tony Elumelu, one of Africa’s leading investors and philanthropists, who was recently named by Time Magazine in the Time 100, the annual list of the 100 most influential people in the world, is raising the bar of excellence across the globe, writes Maduabuchi Ubani

Nothing can stop a man whose time has come, especially, one who is diligent in his work. And such a man will stand before kings and not mean men.

This is the story of Tony Elumelu, one of Africa’s leading investors and philanthropists, who was on September 23, 2020, named by Time Magazine in the 2020 Time 100, the annual list of the 100 most influential people in the world.

Elumelu who is a trained economist, is one of the only four Africans on the 2020 list, recognised for his track record of business turnaround and value creation, and economic empowerment of young Africans.

The list, now in its 17th year recognises the achievement of the world’s most influential people promoting science and technology, leadership, innovation, entrepreneurship,
creativity and even community.

To assemble the list, Time Magazine relies on their journalists around the world and also Time 100 alumni. The aim is not only to celebrate these persons but also to encourage them to keep improving their space and continue to change the narrative across the world.

Over the years, Elumelu has garnered many national and international awards. In
2003, the Federal Government of Nigeria granted Elumelu the title of Member of
the Order of the Federal Republic (MFR), a national honour. In 2006, he won the
African Business Leader of The Year Award conferred by the United Kingdom-based
magazine, Africa Investor. In 2009, the Nigerian President Umaru Musa Yar’Adua asked him to serve on the Presidential Committee on the Global Financial Crisis. In 2012, he received Nigeria’s prestigious award of Commander of the Order of the Niger, (CON) for his service in promoting private enterprise. At the fifth edition of the annual Economic Forum of the Ivorian National Council of Employers, CGECI Academy, (CGECI) in Abidjan
in April 2016, he was awarded a Lifetime Achievement Award. Also, in 2016, he was
awarded the ‘daily times, Nigerian man of the year. The same year, Elumelu
received the Daily Times, Man of the Year award. He received the Inaugural
Dwight D. Eisenhower Global Entrepreneurship Award in 2017, Business Council
for International Understanding (BCIU) and the French President Macron ‘Tech
for Good’ global coalition award in 2018.

Also in 2018, Elumelu received the Person of the Year Award from the Vanguard Newspapers, Nigeria. In 2019, he received the National Productivity Order of Merit, the Jeune Afrique ‘100 Most Influential Africans, and Honorary Degree of Doctor of Business Administration (Honoris Causa).

Elumelu has been making an exponential impact when no one was watching and applauding. He has been positioning himself as a formidable figure that upcoming generations can look up to and learn from.

He is the Chairman of leading African financial services group, the United Bank for Africa (UBA), with presence in 20 African countries, and offices in Paris, London, and New York.

UBA is the product of 2005 merger between UBA and Standard Trust Bank, which at the time was sub-Saharan Africa ex-South Africa’s largest financial services transaction. The merger and subsequent strategy were conceived and executed by Elumelu who has the knack for excelling where others failed. Elumelu also acquired, rebranded, and
restructured the failed Nigerian Crystal Bank, transforming the business into
the fifth ranked bank in a 90-bank industry.

He is the Founder and Chairman of Heirs Holdings Ltd, an African propriety investment company, with interests in power, oil and gas, financial services, hospitality, real estate and healthcare,

Elumelu is known for his significant contribution to entrepreneurship in Africa. In 2010, he created The Tony Elumelu Foundation (TEF), the philanthropy empowering a new generation of African entrepreneurs, catalysing economic growth, driving poverty eradication and ensuring job creation across all 54 African countries.

The foundation has committed $100m in a 10-year programme to fund, mentor and train 10,000 African entrepreneurs. The Foundation’s mission is inspired by Elumelu’s economic philosophy of Africapitalism, which positions the private sector as the key
enabler of economic and social wealth creation in Africa.

He is on the Bretton
Woods Committee, which brings together
senior leaders in the global banking industry, a recognition of his work on
African development. Elumelu who is a Fellow of the Nigeria Leadership
Initiative (NLI), is involved, through his Foundation, with the Tony Blair
Africa Governance Initiative (AGI) in a partnership to strengthen the private
sector’s role in the economic transformation of select African countries. This partnership is called the Blair-Elumelu Fellowship Programme. He is co-chair of
the Africa Energy Leaders’ Group (AELG).

The recognition of Elumelu by Time Magazine which came a few days to Nigeria’s 60th Independence anniversary was seen by many as a national victory. Apart from giving Nigeria and Nigerians a good name in the international community, Elumelu’s recognition by Time Magazine attracted commendations from prominent Nigerians.

First, it was President Muhammadu Buhari who commended Elumelu’s vision of Africapitalism and commitment to the development of African youths. In a congratulatory message the President’s spokesman Femi Adesina said, “Buhari says Elumelu’s commitment to the development of African youths, whom he has given a voice and empowerment, investing $5,000 in 1,000 young entrepreneurs per year across 54 countries, places him as a visionary, with milk of human kindness.”

Even the Minority Caucus of the House of Representatives described the recognition as well deserving, given Elumelu’s selfless contributions towards human capital development, wealth creation, economic growth as well as empowerment of young entrepreneurs across Africa.

The Caucus in a statement signed by the Minority Leader of the House of Representatives, Hon. Ndudi Elumelu said “Dr. Elumelu’s entrepreneurial spirit, hard work and innovativeness have again brought respect and honour to our nation in the international arena,” adding, “as lawmakers, we are proud of Dr. Elumelu, whose performance in global business competitiveness has further reinforced our individual and collective resilience to add value in our national, continental and the global quest for economic growth and better living standards.”

The former Director-General of the Nigerian Maritime Administration and Safety Agency (NIMASA), Dr. Dakuku Peterside noted that the recognition “would bolster Elumelu’s determination to alter the course of emerging African generations for the better and place them on a pedestal of prosperity, service to humanity, and above all, provide leadership for the continent.”

The reward for hard work is more work. And in Elumelu’s case, the world has seen a man who is not resting on his oars anytime soon in creating the future he wants. We see a future filled with limitless possibilities for Elumelu and the invaluable
contributions he is making globally.

As his middle name, ‘Onyemaechi’ (who knows tomorrow) suggests,
nobody can really predict what tomorrow holds out for Elumelu or the next award
coming his way. Surely, Elumelu will keep winning, and when he does, the world will be celebrating with him.