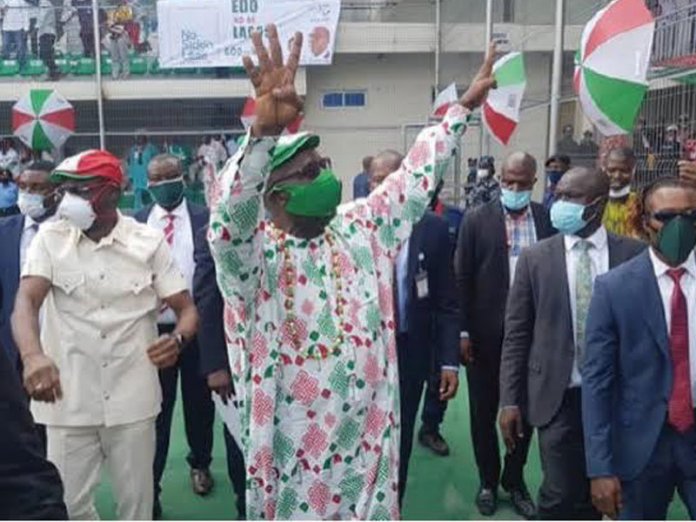 Chuks Okocha who monitored the Peoples Democratic Party governorship Campaign kick-off in Edo State, reports on how the presence of Governor Nysom Wike of Rivers State and other PDP governors re-energised the campaign takeoff after an earlier commotion outside the palace of the Oba of Benin

The kick-off of the Peoples Democratic Party (PDP) governorship campaigns in Edo State was given an overdose of boost and energy with the presence of the chairman of the PDP National campaign committee, Governor Nyesom Wike and other governors elected on the platform of the party.

Already, the morale of the party members and supporters had been downcast following the crisis that ensued outside the gate of the Oba of Benin’s palace, when the PDP Governors and members of the National leadership went to pay courtesy to the monarch.

But their morale was lifted, when Governor Wike and other PDP governors stepped into the Samuel Ogbemudia stadium, venue of the campaigns kick-off.

Mounting the soapbox amidst thunderous cheers, Wike, in an apparent reference to the former governor of the state, Adams Oshiomhole said, the September 19 governorship election would be the end of godfathers in the state He was immediately given another electric cheers.

Wike, who is the chairman of the national campaign council described the state as a PDP state and boasted that no one would stop the victory of the party in the September 19 election.
The Rivers State governor further stated that, “PDP is the party that Nigerian believe in. Nobody should be afraid. Nobody can rig this election. No one man can decide what happens in Edo state. Today marks the end of godfatherism in Edo State.

“The only thing that gives APC hope is rigging. This time it is not possible. To me APC has no candidate to match Obaseki,” Wike added, as his speech received intermittent applause.

Wike also described the attack, allegedly on PDP members outside the Oba’s palace as despicable, noting that the campaign council had commenced investigation into the roles played by certain individuals in the act.

Also, in a statement by the Secretary of the Sub Publicity Committee, Kola Ologbondiyan, Wike said it was also looking into the roles played by one Kabaka in the attack against the entourage, adding that the candidate of the APC, Pastor Osagie Ize-Iyamu, also needed to understand clearly that there was limit to intimidation and thuggery, particularly in the September 19 election.

According to the statement, “It is highly irresponsible for anybody to attempt to harass, intimidate or cause harm to an assemblage of governors and leaders of the PDP, let alone at the palace of the highly revered Oba of Benin. We are already investigating this attempt and if we confirm the involvement of the said businessman, the APC gubernatorial candidate or the said Kabaka, we will not hesitate to take a strong and very decisive action. Enough is Enough!

The PDP said the ancient seat of the Oba of Benin was respected and revered across the globe adding, “As a mark of honour for the Oba of Benin, the governors and leaders of our party considered it imperative to pay a visit and honor the monarch”.

PDP said it was therefore reprehensible that any true Bini son or daughter would choose such an occasion like the courtesy visit to the Benin monarch to demean the monarch and his chiefs.

“While we leave this to the decision of the Oba and his council, we want to place on record that no motley group of political vagabonds will be allowed to embarrass us in this campaign. We counsel the said businessman, the APC gubernatorial candidate and the said Kabaka to desist from further plans to cause mayhem as those who sow a wind should be ready to reap the whirlwind,” PDP stated.

Also speaking, the Chairman of the PDP Governors’ Forum (PDP-GF). Hon Aminu Waziri Tambuwal, appealed to President Muhammadu Buhari to ensure that he bequeath a legacy of free and fair election on the country at any time such opportunity arises before he hands over power in 2023.

He advised President Buhari that despite the insecurity challenges his administration faces, he should ensure that free and fair elections are held in the country as he disengages. He also called on the Chairman of the Independent National Electoral Commission (INEC), Prof. Mahmoud Yakubu, whose credentials he described as unassailable to take a cue from his predecessor, Prof. Attahiru Jega.

“You shouldn’t allow anybody to use you,” he admonished Yakubu, stressing that the lessons of Jega must be upheld and replicated in 2023

Tambuwal, who indicated that the PDP was in the state on a mission of “total and complete liberation of the state from godfatherism, stated that Oshiomhole, who rode to popularity on the crest of anti-godfatherism now wants to force himself on the people.

“You cannot eat your cake and have it. You have been all over the place condemning godfatherism and now you want to come to Edo and have it,” he said, calling on Governor Godwin Obaseki to continue to be firm in his faith in God. “That was what we did in Sokoto to survive all of the forces from across Nigeria that wanted to oust us,” he recalled.

In his response after he was handed the party’s flag, Obaseki, said lawlessness on the part of some leaders of the All Progressives Congress (APC) informed their decision to dump the party.

Obaseki and his deputy Philip Shaibu had in June, defected to the PDP, where he secured the party’s ticket to pursue his reelection, adding that he would not return to the lawless ways of the APC, no matter the provocation.

Addressing a crowd of supporters at the campaign venue, the governor said, “We left them because of their lawlessness. We will not, no matter how provoked, resort to the same lawlessness. I want to thank you and assure you that God has given us the victory.

“Now that we have been given the official mandate, you will see what we will do. Four years ago, I made a promise to you that we are going to transform Edo State, that Edo is the heartbeat of Nigeria, the transformation of Edo will lead to the transformation of Nigeria and by the grace of God, that is beginning to happen and it must happen in this election.

Other governors, who witnessed at the campaign kick-off included Bala Mohammed of Bauchi, Douye Diri of Bayelsa, Ifeanyi Okowa of Delta, Seyi makinde of Oyo, and the deputy governor of Ondo as well as the entire leadership of the PDP.