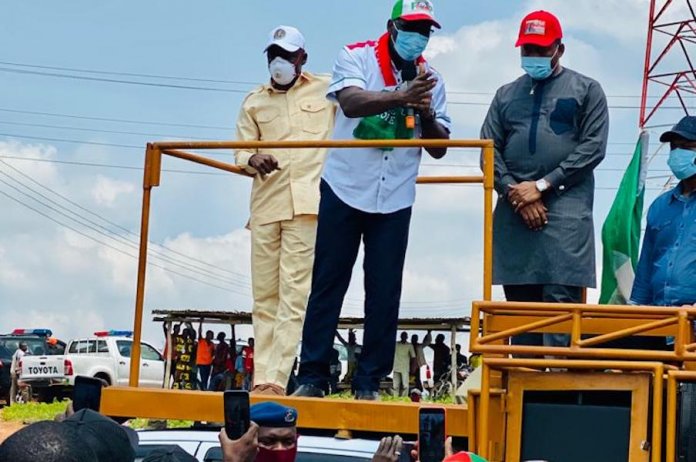 The candidate of the Peoples Democratic Party (PDP) in the September 19 Edo gubernatorial election, Governor Godwin Obaseki, has called on voters in Akoko-Edo Local Government Area (LGA), to come out en masse to cast their votes for the PDP and equally protect their votes to enable him continue his good work for the majority of the people.

Addressing supporters in Okpameri, Akoko-Edo LGA, on Tuesday, Obaseki reassured the people that his administration will continue with the infrastructural development in the council by constructing the Ibillo Township Road to open up the area for economic development.

The governor’s campaign train also received more defectors from the All Progressives Congress (APC) in Akoko-Edo LGA as thousands of APC members in Ward 4, Okpameri joined the PDP, declaring their support for the governor’s reelection.

Leading the decampees, Chairman of ward 4, in Okpameri, Akoko-Edo LGA, Charles Agbedogun, lauded the governor for his administration’s sterling performance across all sectors of the state, reassuring him of the support of voters in Akoko-Edo

Agbedogun said: “The governor and his deputy, Rt. Hon. Comr. Philip Shaibu, have tremendously transformed the state making it an envy of all. We will support and vote for you to ensure that the developmental strides in the state continue till 2023.”

Governor Obaseki however called on vigilante groups in the community as well as the people of Ward 4, to arrest any intruder on election day and hand them over to security officials.

Obaseki said the September 19 Governorship Election in the state was about good and evil, urging the people to vote and protect their votes to ensure he returns to Osadebey Avenue.

Obaseki said Ibillo market was patronised by people from all parts of the country as it is the largest Garri Market in the nation, assuring the people that he will sit with bank owners to set up bank branches in the locality to enable the people bank their money.

He added: “I am a man of my words. We will purchase Armoured Personnel Carriers (APC) to secure the banks and improve security in the state.”