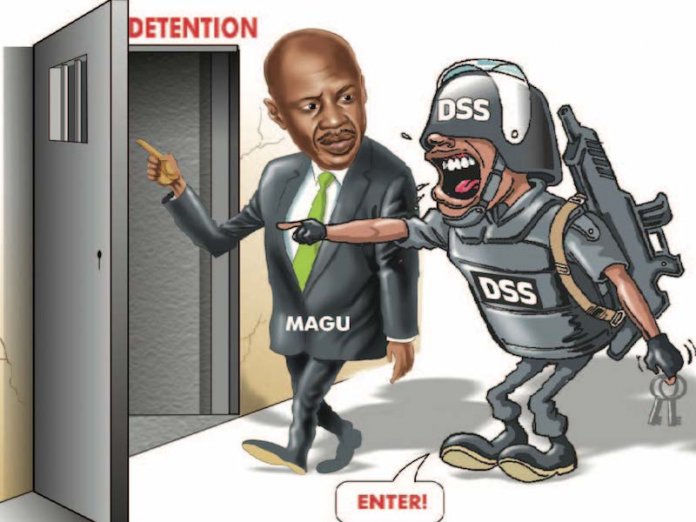 On Friday, President Muhammadu Buhari formally approved the suspension of Ibrahim Magu as acting Chairman of the Economic and Financial Crimes Commission (EFCC) “in order to allow for unhindered inquiry by the Presidential Investigation Panel under the Tribunals of Inquiry Act and other relevant laws.” The EFCC Director of Operations, Mohammed Umar, has also been directed to take charge and oversee the activities of the commission. That was after five days of drama that saw to the arrest and detention of Magu without any official statement.

However, whatever may be the issues in this unfortunate saga, the crux of an anti-corruption commitment ought to be a strict adherence to the rule of law. So, the irreducible minimum in the investigation of Magu or/and the EFCC, is that there be transparency. The facts and evidence must be made public and the matter should not end with the drama of investigation and the politics of appointing a successor, should Magu be indicted and he is no long able to continue in office.

From what is now in the public space, Magu is facing investigation for sundry acts of financial impropriety. For someone in his position, these are grave allegations indeed and a blight on the image of the country. Given that impression has long been created that some smart officials were re-looting the assets recovered from those who have been indicted or convicted for corruption, it is our considered view that it would serve the government better if it is more open about what exactly is going on. Leaving the issue to speculations is very much unhelpful to the federal government and unfair to Magu.

Meanwhile, there are issues in the fight against corruption that must be addressed now that a searchlight has been beamed on the EFCC. There is a perception that the anti-graft agency is more concerned about public image than fighting corruption. It is quick to announce the recovery of ‘loot’ without corresponding activities geared towards docking culprits. Sometimes too, it appears the agency is more interested in getting photo ops in certain critical matters to score cheap points: suspected felons are made to wear tags for the cameras; mug shots are celebrated; court appearances are well advertised; pages of adverts are paid for to show records of arrests and detention.

In spite of all these, the national corruption index remains frightfully negative. State officials are coming up with sleazier and more sophisticated method of stealing. Politicians now even know how to get around the EFCC dragnet. But where and when they are caught, they find a way to get out of the net. Many of these antics have eroded the credibility of the agency and brought it much flak from the public. Besides, if there is anything that the current ordeal of Magu has revealed, it is that the entrenched government reflex of creating new agencies to deal with systemic challenges has only led to the relocation of the various seats of abuse, rather than the elimination of systemic, process and procedural corruption.

For any meaningful change to occur, the EFCC Act needs to be amended so that the agency’s leadership can be drawn from the wider society of judges, human rights advocates, clergy, retired military personnel and other professionals. In addition to the pool of police personnel that populate the EFCC, there are also career officers trained in institutions at home and abroad. For whatever reasons, these officers are cut off from leading the commission, because of the law and convention. Yet if the police were so effective in fighting graft and narcotics trade, separate agencies wouldn’t have been created to fight these crimes. It is rather strange that the police that do not have enough officers and men for normal policing duties would be saddled with the job of running other agencies. Yet, the scramble to be posted to EFCC has in itself become a serious ethical issue.

If the full scope of the current investigation is to expose the extant practices that fuel abuses by officials, we endorse it wholeheartedly. But it must go beyond the career of one officer to a reform that strengthens the EFCC and its very important mandate.

For any meaningful change to occur, the EFCC Act needs to be amended so that the agency’s leadership can be drawn from the wider society of judges, human rights advocates, clergy, retired military personnel and other professionals

No Amount of Kneeling will Save Oshiomhole, Says Shaibu