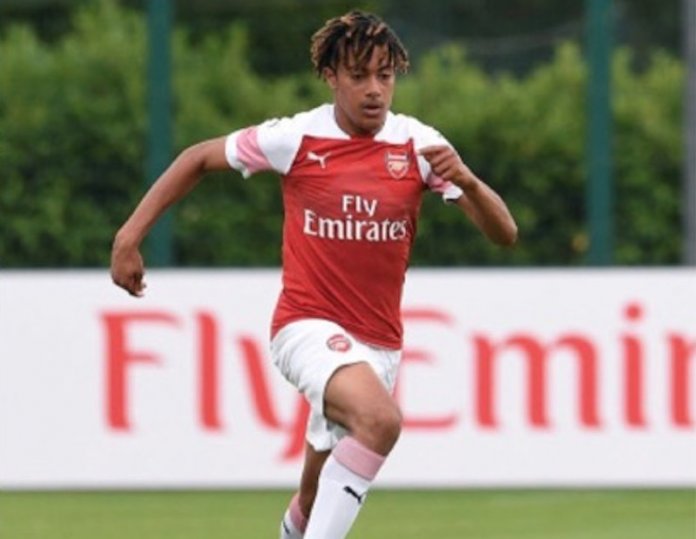 He is seen as the biggest thing after Patrick Vierra at the Emirates Stadium as far as holding the midfield is concerned. Though Miguel Azeez had starred for England at the U-18 level, he is still open to playing for Nigeria and Spain- the country of his father and mother respectively. Waiting for Mikel Arteta’s nod for first senior team’s action is, however, a priority for the player who said he modelled his game after Barcelona star, Sergio Busquets

Though Arsenal wonderkid Miguel Azeez has played for England U-18 international that doesn’t rule out the possibility of representing Nigeria, where his father hails from, in the near future.

The central midfielder is spoilt for choice over the country to represent internationally at senior level as he is also eligible for Spain through his Spanish mother.

Azeez has everything to become a world-class player in the coming years and is one of the academy products regarded as the future of Arsenal.

Blessed with a wide range of passing, ability to strike the ball from distance and a free-kick specialist, Azeez has already been compared to Arsenal Legend Patrick Vierra.

“It will be an honour to play for any country that I am affiliated with but I always believe that I have to keep my options open,” Azeez said in an interview with celebrated Spanish journalist Guillem Balague when asked if he would consider playing for Spain.

“At the moment, playing for any country is a dream that any child has; so to get called up to any country will be an honour to me. I have to keep my options open as well.”

Miguel’s dad has not taken him to Nigeria yet because he has lived abroad for more than three decades, but it’s something on his to-do list which the midfielder is looking forward to.

“That’s because I have not been to Nigeria myself for ages, Nigeria is another topic entirely. I love Nigeria, the thing about the culture is that they don’t pretend to be anything else.

“I can’t speak Yoruba fluently so I don’t even pretend to say to my boys you have to speak Yoruba when I can’t speak it properly myself. I have not been to Nigeria since 1988, so that’s a long time. You just reminded me I have to do it,” said Miguel’s father.

While Nigeria and Spain are looking into the possibility of calling Azeez at some point as they are aware of his potential, England first offered him the chance to play international football.
On his maiden call-up to the Young Lions, Miguel said: “There was an U-15 training call-up, that was like three years ago, that was my first experience with England.

“There was an e-mail I got after training that I have been selected to a training camp with England and I was buzzing to start with them.

“Obviously I was delighted, I remember instinctively I was in the room, my dad called me over and I saw on the laptop there was an email from England, I was jumping with joy because playing for your country is the biggest thing possible. I have been an international to U-18s.”

The 17-year-old Azeez, who signed his first professional contract with Arsenal last year, has been tipped to make his first-team debut for the north London club next season, having trained with the first team this term.

The wonderkid insists he is ready to grab the opportunity with both hands if it comes after receiving positive feedback from coaches at the club.

The Gunners are currently upgrading a host of young talents into the first team with Coach Mikel Arteta keen to promote youth into a new era at the Emirates fronted by himself.

Eddie Nketiah, Joe Willock, Bukayo Saka and Reiss Nelson are all starting to flourish but many see 17-year-old Azeez as potentially the best of the lot.

The teenager is a swaggering midfield player that many are already likening to Gunners hero Vieira.

Azeez indeed said he models his game on Sergio Busquets – and says he wants to be “the best football player in the world”.

“One of my idols is Sergio Busquets,” said the English-born when Balagué pointed out his style of play is like that of a Spanish midfielder.

“I think he has been the best holding midfielder for a very long time. He always seems to have space around him, always plays with his head up, one step ahead.”

He is generally regarded as one of football brightest prospects, his career is currently being monitored by all three of the different country’s federations all of whom he is eligible to play for.

He began training with Arsenal from the age of five, and has progressed steadily through the academy at Hale End.

Playing with a maturity above his years, he’s viewed as a natural leader – something Arsenal giants have lacked in midfield since the days of Vieira.

And he is already coming across as a confident young person off the field, as per a recent interview where he went into more detail about his progression at Arsenal.

Asked whether he has any interaction with Arteta or other club coaches, Azeez said he hasd been receiving positive feedback.

“How is relationship with Mikel Arteta? Have you spoken to him yet?” asked Balague, to which the teenager replied, “Not personally one to one but when we train with them we obviously get some feedback.

“He understands the game and is one of the best managers because he has a different look at football and how it is evolving all the time.

“Also Per Mertesacker has also told me to keep believing because an opportunity will arise for me in the first team and when it does I will grab it with both hands.”

When he was 15, Azeez was already appearing for Arsenal’s U-18s, and didn’t look out of his depth.

By 17, he was captaining their U-18s and dictating the play in the middle of the park, wowing coaches with his ability.

His rise has been recognised by England, who have capped him at U-16, 17, and 18-level, and there’s certainly more international honours to come.

Back in September, Azeez signed his first pro contract with the club – a three-year deal with an option to extend that contract for a further two a year before it runs down.