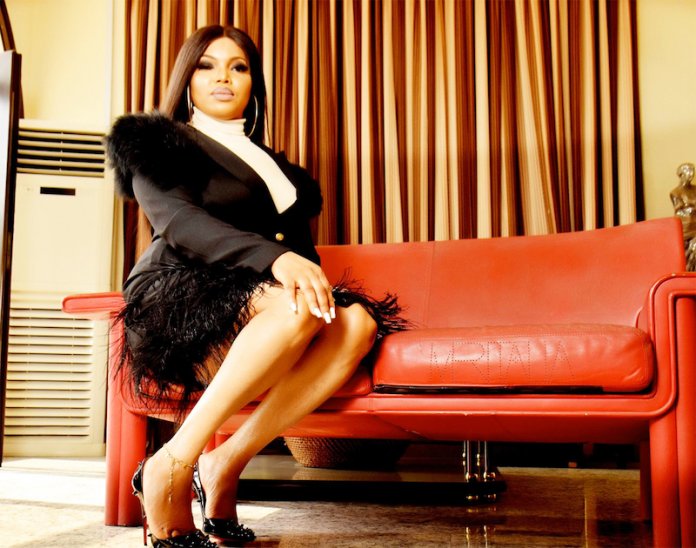 Giving style a try-out half a decade ago, fashion celebrity and Chief Executive Officer of ‘Luxury By Feyi,’ Feyi Adeyemi is today counting her blessings as she hits a milestone, reports Omolabake Fasogbon

Popular fashion label, ‘Luxury By Feyi’ owned by Feyi Adeyemi is one brand that resonates with fashion suckers. Feyi, as fondly called is one of Nigeria’s best, flying the flag of the country and doing a roaring trade at the global fashion market. The international designer is presently over moon as her sought after label, ‘Luxury By Feyi’ clocked five years with lot of accomplishments.

Half a decade ago, when she considered style-setting for a career, it was a tough step for her even though dress styling has always been a childhood passion. Thinking that fashion would not fetch the desired status and satisfaction, the mother of three first resorted to a career in banking. While in banking, her first love kept calling, forcing her to make a switch to fashion with the influence of her parent.

Recounting her journey, the snappy dresser said: “As early as five, I had shown interest in fashion designing so much that I taught myself to sew with my mother’s knitting materials. This led to a period of making dresses for my beautiful baby dolls. As I grew up, my parent made it clear to me that I needed to pursue a traditional career path. It took me until my adulthood to come to terms with myself that I could turn my passion into a full-time business and earn a living by being myself.”

At a time in her life, Feyi relocated to the United Kingdom to study Social Science, taking a keen interest in entertainment. As a celebrity and pop culture fan, she had a stint at a radio station, “Inside Africa Ireland” where she rose and got a slot to produce her own show. As a happily married woman with a career that gave her freedom to express her creativity at will, the fashion celebrity has every reason to be happy but the reverse is the case.

She said: “When I left the office, I wasn’t myself, something was missing. After a conversation with a close mentor, she suggested that I she should try to work in fashion, that got me to work on researching options to switch my degree and study to fashion.”

The beautiful seamstress succumbed to this piece of advice and set out for training in designs which she confessed was rigorous during the early years. She soon graduated to create her own fashion blog called “Simply Glamorous Fashion”. The blog started out as styling content, covering celebrity fashion. It soon grew in popularity and fetched Feyi an opportunity to travel to cover red carpet shows.

She said: “A lot of comments started flooding my inbox with people seeking fashion tips and consultations, majority of them of which were from London. The signs could not have been clearer that I needed to be in London to leverage my connections and launch my first collection. I spoke with my hubby and we concluded that I move to London with our three sons while he would have to work in Ireland until he found a way to transition to live with us, which he did.”

Five years down the line, Feyi has attained the most coveted status in the industry and not relaxing. Her designs have received a prominent appearance in renowned publications like Vogue, Glamour, Schon, Locale, D4 Magazine, Grazia Pakistan, Runway, and Grumpy Magazine, amongst others. Her works have also debuted on mainstream stages such as the European Music Awards, the Emmys, the NAACP Image Awards and Coachella. This is in addition to having a collaboration showcased with Aston Martin London during the SS19 London Fashion Week.

As a storyteller, the sedulous entrepreneur says she finds inspiration from nature, cultural values, personal stories as well as surrealist art from creatives such as Andy Warhol, Alexander McQueen, and Stephane Rolland. Interestingly, the couturier is sets for a new page. She announced thus: “The next stage for LuxuryByfeyi now is building our Masterclass. We are currently working on our first ever digital Masterclass titled ‘The unstoppable Fashionista Brand Building’ which will run for six weeks beginning from this May. I will be teaching budding designers on fashion branding structure. Believe it or not, brands are somehow determined and defined by their structure. I aim to use this to inspire and encourage young designers, particularly from African descent, not to limit themselves but to break boundaries globally. We are also planning to launch our brand in Nigeria very soon.”T