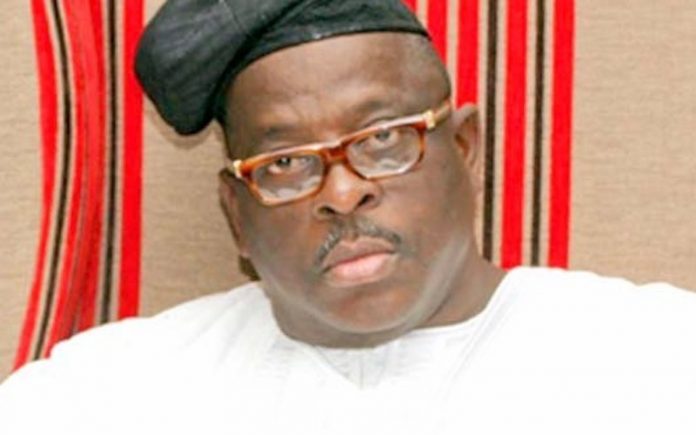 The new chairman of the Ogun State chapter of the Peoples Democratic Party (PDP), Honourable Samson Bamgbose, has said the inauguration of the new State Executive Committee last Friday complied with the laws of the land and therefore valid.

Bamgbose said this on Sunday while reacting to a statement credited to Prince Uche Secondus and Senator Umaru Tsauri, National Chairman and National Secretary of the PDP respectively, dissociating the National Working Committee (NWC) of the party from the newly inaugurated state executive committee in Ogun State.

The new PDP leadership in the state is backed by a top leader of the party, Senator Buruji Kashamu.

Bamgbose, in a statement, noted that while the position of the NWC was not unexpected, “it is disturbing that our leaders in this great party still do not understand (or just don’t care) that all politics is local and that handing over the structures of the PDP to Ladi Adebutu (whose only desire for seeking such control is to guarantee his ambition of being the candidate of the party for the Ogun State gubernatorial elections in 2023) is a recipe for depletion of the commitment of members to the party in Ogun State and defeat at the polls.”

According to Bamgbose, the issue as to which organ of the party is empowered to conduct congresses for the elections of party leaders in Ogun State had been resolved in Suit No. FHC/L/CS/636/2016, which reposed the powers in the party’s state executive committee.

He said, “The courts in Suit No. FHC/L/CS/347/2012 and successive cases (particularly Suit No. FHC/L/CS/636/2016) have sought to create a special case for the conduct of congresses and primaries in the Ogun State Chapter of the PDP.

“That an order is granted to the Plaintiff (Adebayo Dayo led PDP OGSEC) restraining the 2nd Defendant (PDP) by itself, its agents, servants, proxies and surrogates from henceforth conducting the affairs of the PDP in Ogun State, including meetings, congresses and/or primaries except through the new officers of the party that have emerged from congresses conducted by the plaintiffs as listed in the exhibits attached to the affidavit in support of this originating summons.

“That an order is granted to the plaintiff directing the 1st defendant (INEC) to deal exclusively with the new Ogun State officers of the PDP that emerged from the congresses conducted by the plaintiffs (as listed in exhibits attached to the affidavit in support of this originating summons) in the conduct of the 2nd defendant’s (PDP’s) programmes in Ogun state including congresses and primaries of the party until the four years tenure to which they have been elected is spent.”

Bamgbose said the validity of the judgment had been challenged at the Court of Appeal and the Supreme Court where it was dismissed.

The PDP chairman stressed that the organ empowered to conduct congresses for the PDP in Ogun State is the judicially recognized state executive committee.

He added, “Currently, the unassailable position is that congresses have been validly concluded by the outgone, judicially protected PDP OGSEC and new officers (that emerged in accordance with the terms of the orders in Suit No. FHC/L/CS/636/2016 set out above) have been validly inaugurated on the last day of the judicially recognized and specified tenure of the outgone leadership.

“My colleagues and I (following that inauguration) have now legally and validly taken over the running of the affairs of the Party in Ogun State.”

The PDP state chairman described the claim that the congresses that produced the new state executive and the inauguration contravened the interim injunction order made by Justice Inyang Ekwo, in suit No FCT/AB/CS/208/2020 on March 4, 2020 directing the maintenance of status quo until the hearing of the notice, Bamgbose as untrue because there was no interim injunction against the conduct of congresses in the state.

He explained that Suit No. FHC/ABJ/CS/208/2020 was instituted by some national officers of the PDP to seek a review of the judgment which had ordered that only the said authentic PDP state executive could conduct congresses or primaries of the PDP in Ogun State.

According to him, the plaintiffs had applied for an order of the court to stop the PDP OGSEC from conducting congresses and the court had refused the application and directed that the defendants be put on notice.

Bamgbose said “By March 3, 2020, when this matter came up, a preliminary objection had been filed on behalf of the Adebayo Dayo led OGSEC, challenging the jurisdiction of the court to entertain the action.

“In the face of this preliminary objection, the court could not and did not entertain any application to stop the conduct of PDP congresses in Ogun State; the Supreme Court has directed that in such circumstances the court whose jurisdiction is being challenged cannot make any order against the interest of the party challenging its jurisdiction.

“It was whilst adjourning the case for hearing of the preliminary objection and other applications that the judge on his own volition made the remark that “parties should refrain from doing anything that will tamper with the res of the action.

“This was not an order restraining conduct of congresses or for maintenance of status quo as misrepresented in PDP NWC.”

Bamgbose added that to consolidate the position of the executive, “we decided to take ourselves outside possible allegations of breach of the ‘order’ or of contempt of court by appealing against the order and filing an application for its stay. It is a known dictum in law that a party cannot be in contempt of court when he disobeys an order he has appealed against and filed an application to stay.”

Bamgbose said the state executive was willing to accord the national leadership of the party its deserved respect but the leaders must learn to operate within the ambit of the law.

He added that the state executive was amenable to working with the NWC to bring feuding groups together in the state and position the party to take over the reins of government in 2023.