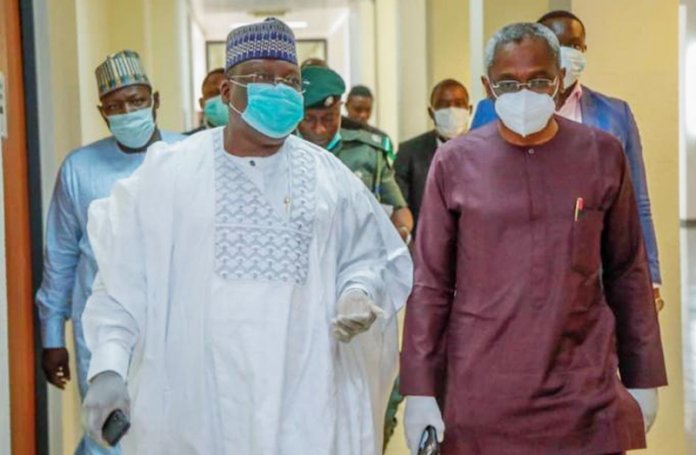 Members of the National Assembly, last Tuesday, returned to their beats to attend to routine legislative duties after a five-week break on account of the Covid-19 pandemic, shut down again almost immediately. Deji Elumoye and Udora Orizu report

The National Assembly complex in located within the Three Arms Zone of the Federal Capital Territory (FCT), was a beehive of activities last Tuesday as the federal legislators resumed from their more than a month recess orchestrated by the Coronavirus pandemic.

The two chambers had at separate plenary agreed to shut the National Assembly by two weeks so as to prevent the spread of the Covid-19 in the Assembly.

However, before the expiration of the two weeks, the President, in a bid to also curb a further spread of the pandemic locked down the Federal Capital Territory (FCT), Lagos and Ogun states for four weeks. Several attempts by the leadership of the National Assembly to reconvene did not see the light of the day until last Tuesday.

While the lawmakers were allowed free access into the complex, the aides of the principal officers of both the Senate and the House of Representatives as well as accredited journalists were denied entry.

Findings by THISDAY revealed that there was a specific instruction from the Assembly management to disallow reporters from accessing the complex, with a view to ensuring that journalists did not cover any of the proceedings.

Only a few, not more than 10 journalists, were eventually allowed to cover last Tuesday’s sitting by the legislators.

The leadership of both the Senate and the House of Representatives had given reason for their return to work, saying the resumption was to consider and approve some key proposals by the Executive arm to jumpstart the country’s economy in the face of challenges orchestrated by the Covid-19 pandemic.

The resumption, they said, would be in strict observance of the guidelines provided by the Nigeria Centre for Disease Control (NCDC) as well as new measures taken by the legislators to avoid the spread of the disease.

Lawmakers arriving at the National Assembly complex adhered to the NDDC guidelines by wearing facemasks and also practised social distancing right inside the chambers by sitting two seats away from one another.

Attendance was also impressive, given the short notice. In the Green chamber, for instance, out of 360 members, almost 200 showed up.

Starting the plenary session around 11:15 am, both chambers discussed challenges of the Covid-19 outbreak in the country, including adopting legislative measures for palliatives to reach all vulnerable Nigerians in lieu of the approaching economic downturn.

The Senate session presided over by the President of the Senate, Dr. Ahmad Lawan, gave an accelerated approval to President Muhammadu Buhari’s request for N850billion loan from the Domestic Capital Market to finance projects in the 2020 budget.

In his welcome address, Lawan said the pandemic had affected the budget for 2020, not just because of falling oil prices, but also because it has forced a reduction in economic activities, leading to an enormous loss of revenue.

He noted that the Senate leadership had been working with the executive on areas of adjustments for a more realistic implementation, adding that the resumption yesterday would lead to a quicker resolution of some of its decisions.

The upper legislative chamber, after rising from a two-hour executive session, considered the loan request contained in a two-page letter dated March 24 from Buhari, and read by Lawan.

Senate Leader, Senator Yahaya Abdullahi, moved a motion for the suspension of Order 1 of the Senate Rules to allow the Senate to consider the loan request. He requested that the loan application be granted due to the necessity of the time and the strategic projects to be executed with it.

There was no dissenting voice and the Senate unanimously approved the N850billion loan request.

Lawan, thereafter, directed the Minister of Finance, Budget and National Planning, Zainab Ahmed, to furnish the Senate Committees on Appropriation and Finance with full details and breakdown of the approved loan.

Also, last Tuesday, the Senate urged the Executive to appropriate 10% of Gross Domestic Product (GDP) as Stimulus Package for investment into key sectors.

He also named the erstwhile acting spokesman of the upper legislative chamber, Senator Godiya Akwashiki as the new Chairman of the Senate Committee on Labour and Productivity.

From the Green chamber, House Speaker, Hon. Femi Gbajabiamila in his welcome address, revealed that in preparing for the new reality the country faces, he has established a Covid-19 Strategic Response Team (CRST) with a broad mandate to develop interventions and reforms and to update the Legislative Agenda to reflect Nigeria’s post-Covid-19 realities and priorities.

Thereafter, the House resolved to hold its plenary sittings once a week until the lockdown order is lifted. The House made the resolution, following the adoption of a motion, entitled, ‘Regulating Plenary Sittings in the Period of COVID-19 Pandemic and Lockdown, pursuant to Order One, Rule 1 (2) of the Standing Orders of the House of Representatives’, sponsored by Hon Abubakar Fulata.

The House also passed for second reading a Bill seeking to repeal the Quarantine Act and Enact the control of infectious diseases Bill.

The proposed legislation entitled, “Bill for an Act to Repeal the Quarantine Act, Cap. Q2 Laws of the Federation of Nigeria 2004, and Enact the Control of Infectious Diseases Bill; make provisions relating to quarantine and make regulations for preventing the introduction into and spread in Nigeria of dangerous infectious diseases; and for Related Matters,” was sponsored by the Speaker and two other lawmakers.

Leading the debate on the Bill, Gbajabiamila said the Bill seeks to empower the NCDC and allow it to do its job.

Supporting the Bill, Hon. Nicholas Ossai said, all the clauses of the bill capture the need to treat and handle outbreaks urgently.

Contributing, Hon. Bamidele Salam said, he believed that the bill meant well, but that there were certain areas to be amended.

He said: “How are we sure that immediately after the pandemic, we will not go back again about the state of our health Institutions? This is an emergency situation. The way we are sitting in the House has already defined the essence of the Bill. Just like we handled the stimulus bill, we should do same here, when the bill was about to take off, it wasn’t easy; many people did not believe in the Bill.”

However, opposing the Bill, Hon. Sergius Ogun, asked the House to think twice and avoid giving so much powers to the NCDC.

He warned the House to “be careful with thrusting omnibus powers on an agency, whose responsibility it will be to determine whether or not a vaccine is necessary for combating a given outbreak. Such could give rise to conspiracy.”

Hon. Uzoma Abonta opined that the Bill was coming at a wrong time and urged the lawmakers to apply restraint on the bill, saying, “Direction is superior to speed. We are all aware of what is awash in the social media. Why I’m saying this is, I have seen the quarantine act, something bigger than disease control. We need a bill for control of prevention disease.

“What I’m trying to say is we should not, because of what we are trying to do and make big error. If we are going to do away with public hearing, then, we must seek direction and not speed.”

“If you look at the language of the bill: the NCDC “may” be empowered. It is also not true to say public hearing is an integral part of every bill, but public hearing gives the people outside the opportunity to contribute. What this means is that the House will have to subject every bill to public hearing.

“I thought we are here to address some very serious and important issues. This bill, like I said, is to improve on what we have. The essence of the Bill is what we should keep our focus on and work out the details and I plead that we pass this bill and send it to the Senate.”

At this point, the question was posed by the presiding officer and Deputy Speaker, Hon Ahmed Wase and the bill got maximum votes, and it was referred to the committee of the Whole for consideration.

Again, last Tuesday, the Green Chamber pushed for repatriation of illegal Chinese in Nigeria following the maltreatment of Nigerians in China.

The House, while condemning in its entirety, the maltreatment, discrimination and xenophobic attacks on Nigerians by the government in China, ordered investigation into the legality of Chinese living in the country for possible repatriation to China.

The House consequently mandated its committees on Interior, Nigeria Content Development and Monitoring, and Commerce to investigate the Nigerian Immigration, Corporate Affairs Commission, Nigerian Content and Development Monitoring Board, and any other relevant Ministry, Department or Agency in a bid to commence processes that would lead to the repatriation of illegal Chinese immigrants.

The resolutions were sequel to a motion titled: “Maltreatment and Institutional Acts of Racial Discrimination against Nigerians Living in China by the Government of China:” sponsored by Hon. Benjamin Kalu and nine others.

It also resolved to investigate the procurement and distribution of Personal Protective Equipment and other related expenditures in connection with the control of Covid-19.

These resolutions were sequel to the adoption of a motion, entitled, ‘Call on the federal government to ensure the provision of Personal Protective Equipment (PPE), Regular Release of Overhead Costs and Special Intervention Funds for all Federal Tertiary Hospitals in Nigeria,’ jointly sponsored by four members, namely Yusuf Sununu, Samuel Adejare, Haruna Mshelia and Shehu Kakale.

However, the leadership of both chambers of the National Assembly needs to revisit the issue of the adjournment. One begins to wonder why the Senate reconvened last week after a five-week break only for it to adjourn sine die (indefinitely).

Granted that the Presidency is yet to present the 2020 Budget Amendment Bill before the Red Chamber for approval, there are other pending legislative duties for the Senate to work on.

So, with the gradual relaxation of the lockdown imposed by President Buhari, the Senate should reconvene on Tuesday and revert to its normal plenary sessions from Tuesday to Thursday.

This should also be applicable to the House that had resolved to sit only once a week. Rather, the Green chamber should also go back to the mandatory three sitting days in the week from Tuesday through Thursday.

With such an arrangement, both the Senate and the House would be able to cover a lot of legislative grounds they had lost in the last six weeks to Covid-19 outbreak.