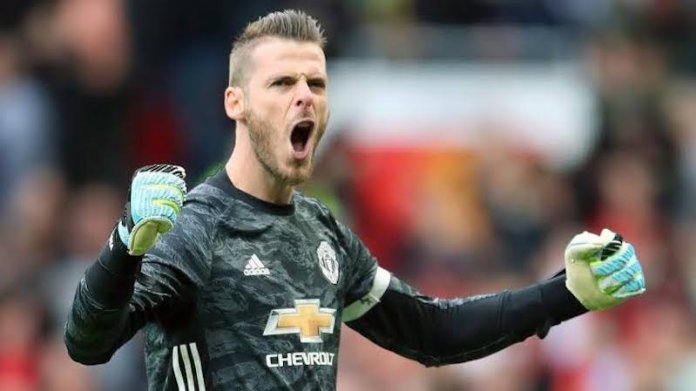 Manchester United first choice goalkeeper, David De Gea, is already looking forward to more years with the club as against annual rumour of intend departure from the former English champions.

The 34 years old goal keeper whose contract expires soon including the optional extra 12 months is now seeking for contract extension.

Despite coming very close to leaving once and the of subject of speculation at many other times, De Gea has always maintained a close personal attachment to United, never actively pushing to leave even when a Real Madrid transfer was at his fingertips.

His latest comments on being at the club only serve to reinforce that and he comes across as genuinely privileged to be at Old Trafford for what will have been 10 years in 2021.

“I am getting older,” De Gea joked on a United Hangouts chat.

“Just to be a part of this club is amazing, so imagine being here for nearly 10 years – it is something like a dream! It is great to play games with this club and I hope I can be here for many more [years].”

The question of De Gea’s United future has resurfaced yet again in recent months, but not for the same reasons as in the past. The 29-year-old has seen his form wane, while home-grown stopper Dean Henderson has enjoyed two very strong seasons on loan at Sheffield United.

Henderson has been widely tipped to spend another year away from Old Trafford next season, but the prospect of competition should also serve to improve both goalkeepers in the longer term.

De Gea feels that United were taking positive steps when football was halted as a result of the coronavirus crisis, especially with the mid-season addition of Bruno Fernandes.

“I have seen the whole team improve a lot and we were in a good moment,” he said.

“I think we were in top form, we didn’t concede many goals and of course with Bruno. He brings a lot of quality, he is a clever player, a top midfielder, the team improves with him and it was a pity that everything stops because we were in a good moment.”