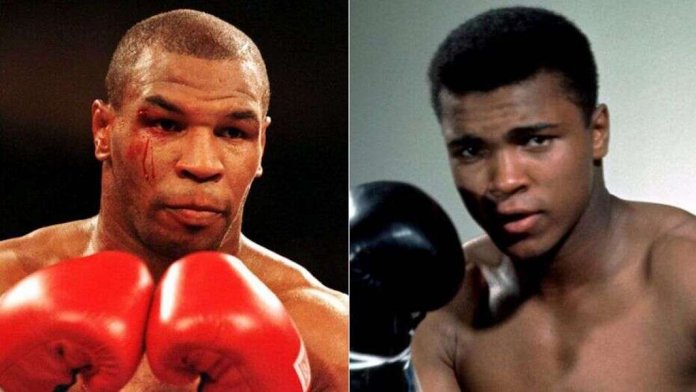 Muhammad Ali’s son has weighed in on the debate as to who would win in a heavyweight showdown between his father and Mike Tyson, claiming Ali would have emerged victorious.

A virtual simulator tournament has sparked huge conversations about which boxing stars from different eras would win had they ever met in the ring.

And it was Iron Mike who claimed victory, with the judges awarding him a unanimous points victory after flooring Ali on two separate occasions.

But the eldest of Ali’s nine children, Muhammad Ali Jr, feels that there is no question that his father would have swept Tyson aside had the pair every actually fought in their primes.

“Tyson can’t go the distance. He couldn’t go fifteen rounds. He’s not a boxer. He’s a street fighter. He’s a knockout artist. He can never hold up to my father!’

Upon hearing the result of the simulated fight, Tyson conceded that he would not have fared well against his hero had they met in the ring.

“I wouldn’t win the real fight. Ali’s the greatest there’s ever been,” Tyson admitted.

The virtual simulator concept has taken off this past week. Floyd Mayweather earlier agreed a deal that will see him take on some of the greatest fighters to grace the welterweight division.

Not one to shy away from talk of being the greatest boxer to grace the sport, fans will be able to see how Mayweather would fare against the likes of Sugar Ray Robinson, Sugar Ray Leonard and Tommy Hearns.