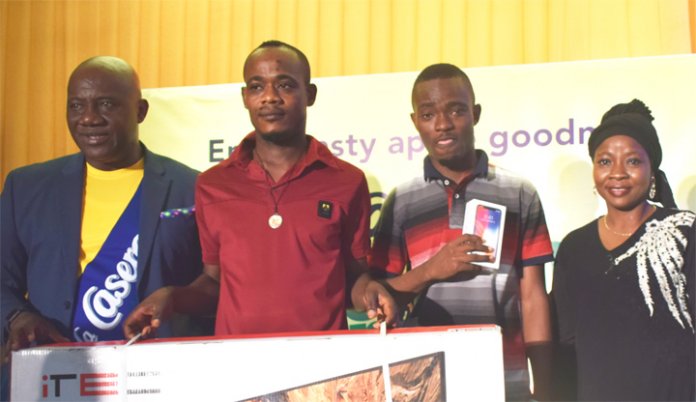 Brand loyalty can only be guaranteed with thorough understanding of the consumer and deploring of reward system such as promotions to satisfy and exceed the customers’ expectations. Raheem Akingbolu looks at this process and how La Casera engaged the consumer to strengthen relationship

Globally, customer reward and promotions have been identified as marketing strategies to reinforce existing relationship between organisations and customers who are global citizens resident in a locality. The primary reason is to ensure brand loyalty and generate profit.

Employment of these strategies by organisations is with understanding that consumer loyalty is pre-requisite for success in a highly competitive environment like the Nigerian market. But more important to customer reward and promotions is the drive of value and trust.

Many organisations like La Casera Company, pioneer of PET bottled Carbonated Soft Drinks in Nigeria which recognise that promotions alone that are normally short-lived cannot continuously guarantee consumer loyalty have been able to fuse into this strategy value and trust schemes driven by consumer insight.

As said by experts, organisations cannot buy customer loyalty, it is earned. According to them, the value perception by the customer has a direct impact on the level of loyalty to the brand.

For instance, in 2001 when The La Casera Company with plant at Mile 2 launched apple non-alcoholic drink in a PET bottle, the drink immediately received market traction for its refreshing taste and for handy pet bottle which offered Nigerians the opportunity to drink on the go.

Apart from various consumer engagements and trade support programmes employed by the company to build brand equity with consumers, other factors that assisted to create appeal of consumers for the innovative soft drinks in various flavours were product visibility and price.

In the last 18 years, the brand has found its way into the hearts and minds of consumers and has grown to become an iconic brand. The company is still innovating which is an indication that the company is striving to remain focused in its ability to offer quality customer service to its targeted audience. It recently introduced Bold drinks in variants such as Ginger, Orange. The company’s value propositions of customer- satisfaction niche and trust have combined to build consumer loyalty for it.

For any brand, it is important to sustain the already built brand loyalty and create new ones. This is what La Casera which maintains prime position in the Apple segment for 18 years in the Nigerian CSD market, did recently when it held consumer reward through market promotions pan Nigeria.

Late last year, the brand owners held a promo called ‘under the crown consumer promotion – Refresh & Connect’ aimed at rewarding the brand’s esteemed consumers and to further strengthen the existing bond with the consumers while also reinforcing its brand positioning as a major player in the CSD category.

La Casera ‘Refresh and Connect’ consumer promo was an expression of appreciation to consumers who have remained loyal and committed to the brand over the years, Managing Director of The La Casera Company (TLCC), Chinedum Okereke, said.

According to Okereke, “we are in business because our teeming consumers have chosen to remain loyal and committed to our brand, the La Casera apple drink, which has been in the market for almost two decades”. He stressed further that the Refresh and Connect promo was based on deep insight which reveals that the average Nigerian relish staying refreshed and connected to love ones, hence the promo idea.

The promo was an avenue for every consumer to enjoy a refreshing bottle of La Casera Apple drink with natural apple taste and also win big.

With the La Casera Refresh and Connect Consumer promo, the brand further connected with consumers as it encouraged them to partake in the promo and win big. Various prizes won include Smart TVs, Laptops, Mobile phones, Bluetooth Headsets, La Casera products and airtime worth millions of Naira.

Under the promo, crowns for the La Casera Apple drink were specifically designed and come in Yellow as against the regular blue colour. Consumers, who purchased La Casera promotional bottles in 35cl 50cl or 60cl with a yellow cover participated in the promo.

Okereke explained that consumers, who bought La Casera apple drink showed that they trust the brand and the company, as the company would always ensure that its consumers get the highest quality of products always. He noted that The La Casera Company has resolved to continue to give Nigerians more innovative products, urging consumers to keep refreshing with the brand.

Consumers, who looked under the bottle cap and sent the 8-digit unique code under the cap via SMS to 20055 or via WhatsApp to 09034509330 won airtime and participated in the monthly draws where the fantastic prizes were won.

He reiterated that consumers, who participated up to 10 times each month qualified and entered into the monthly Grand Draw where various prizes were won. 6 Grand Draws were held throughout the duration of promo at different locations.

While explaining the idea behind the consumer promotion, the Marketing Director, The La Casera Company (TLCC), Emmanuel Agu, expressed excitement how the promo generated joy among consumers across the country.

Also speaking, the Senior Brand Manager of the company, Ruth Ode, said that La Casera decided to hold the draws across several regions of the country in order to give consumers in all parts of the country the opportunity to win the prizes being offered in the promotion.

Some of the winners included John Emeh, a clothing trader based in Port Harcourt, who won a 43’ Hisense smart TV in the promo. Ode said he was very delighted to have been picked as a winner in the grand draw. “I am so happy and excited,” he said.

Another winner, of an IPhone X mobile phone in the promo is a cook, Esther Tobechukwu. She explained that she never expected to win but just enjoying her favourite apple drink La Casera anytime she craved for the taste of apple, but never believed she could win anything from La Casera. “Today, I am glad and overwhelmed. La Casera have made me an IPhone owner. I advise others to continue enjoying La Casera Apple Drink. I now know clearly that La Casera rewards,” she stated.

To underscore the promo as investment in people’s lives while driving growth , the management of La Casera visited the Emir of Kano, His Highness, Muhammadu Sanusi II, at the his palace as part of activities for the grand draw of the consumer promo.

Okereke, thanked the Emir for the rare privilege of such a historical visit.

He highlighted the pedigree of the company, which houses household brand names such as La Casera Apple drink, Smoov Chapman, Nirvana range of products and Bold Bitter lemon along with the newly introduced variants that form the Bold Franchise.

Okereke, while outlining the company’s contributions in building the nation and the economy through employments, said: ‘We employ over 1,000 people directly in our company operations and over 10,000 people indirectly across the country. We equally have close to 2,000 direct dealers handling our products, as well as several vendors in our value chain.’

The La Casera Company which holds the historical city of Kano as a key location for its business, in 2019, carried out a multi-platform educational enlightenment campaign against the ills of substance abuse, targeted at the youth.

The Emir in his remarks, underscored the significance and relevance of Kano not just as a major market for products but also as a strategic point through which goods travel to the whole of West Africa. He expressed his desire for Kano to develop further beyond a consuming market into a production and manufacturing hub. He stressed that this was the only way to curb the social problems that bedevilled youth in the region.

Muhammadu Sanusi II also advocated more investment in agriculture and manufacturing, urging The La Casera Company to have a strategic plan to put more infrastructure on ground in Kano, even as its business continues to expand.

After leaving the Emir’s palace, the TLCC team headed to the Vesico-vaginal Fistula (VVF) Kwali Rehabilitation Centre, where donation of 3.5KVA solar power equipment to the centre was made. It had identified water and power as the major challenges faced by its inhabitants.

The solar panels will provide electricity and help to power the water pump in the hostel.

Hauwa Bello Umar, who is the officer-in-charge at the centre, thanked TLCC for providing succour to the centre inhabitants, who have already been through their own ordeals.

Building brand loyalty is a deliberate effort, which must start with consumer insight, supported with clear defined programmes such as promotions to exceed consumer expectations.