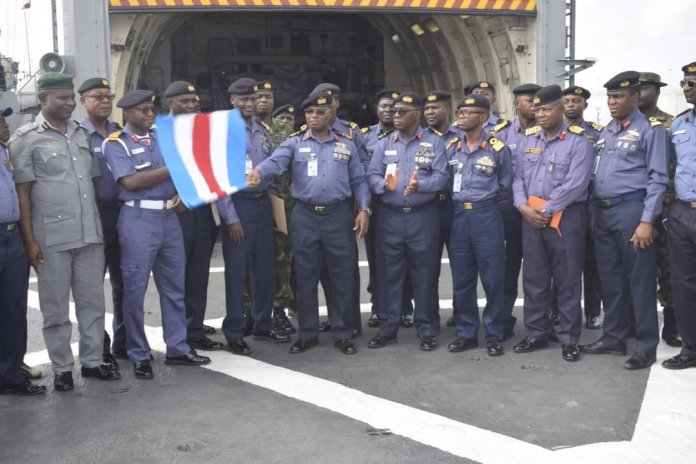 Chiemelie Ezeobi and Chinecherem Ojiako write thatthe recently concluded Exercise Treasure Guard 11 by the Nigerian Navy was targeted at among other things, reinforcing zero tolerance for maritime illegalities in the country’s territorial domain and the Gulf of Guinea waters

It was in its constant bid to find lasting solutions to the myriad challenges bedeviling the GoG, that the Nigerian Navy (NN) organised Exercise Treasure Guard, especially with the successes recorded in the first phase. The exercise saw the navy deploy six vessels and two helicopters for the three-day exercise which covered about fifteen nautical miles within the GoG waters.

Lying across 19 coastal and island states, the Gulf of Guinea (GoG) coastline, which stretches from the waters off Senegal to the south of Angola, is a treasure trove of rich resources. Comprising 26 countries grouped into two Regional Economic Communities (RECs), namely Economic Community of Central African States (ECCAS, 11 states with the return of Rwanda) and Economic Community of West African States (ECOWAS; 15 states), the GoG countries’ total population is about 472 million, with 160 and 310 million inhabitants for ECCAS and ECOWAS, respectively.

The GoG is also the primary conduit of international trade and is central to the economy of the associated regions. It is increasingly looked upon today as resource provider and critical contributor to national growth and prosperity of the several nations lining its coasts and even those landward and with no shared boundaries.

Given all the inherent potentials in the GoG waters, the idea of Exercise Treasure Guard 11 on that same coastline was well received. For the exercise, six warships along with other sister agencies embarked on the operation targeted at putting a stop to activities of pirates and crude oil thieves operating around the country’s territorial waters.

Thus, it was in furtherance of the need to rid the nation of maritime illegalities that the operation ‘Exercise Treasure Guard’, a sea exercise aimed at maintaining professionalism and improving personnel capability, was espoused in line with the the chief of naval staff’ zero tolerance for maritime illegalities on the nation’s waterways.

The three-day operation started from the Western Naval Command area of responsibility which includes Lagos, Ogun, and Ondo States and according to the Flag Officer Commanding Western Command (FOC), Rear Admiral Oladele Daji, the inauguration of Exercise Treasure Guard 11 was to increase the confidence of the global shipping community.

Moreover, the overall objectives were to demonstrate and evaluate the navy’s maritime operation centres interoperability, and its tactical interdiction capability. It was also geared on how to demonstrate the capability of the navy to respond to real-time maritime threats, as well as prevent and counter such threats.

But the key purpose was to protect key critical oil facilities at sea, especially as the nation and the world at large battles COVID-19 and all attention has seemingly been shifted to tackling the virus. The navy thus carried out the exercise to prevent sea robbers from taking advantage of the spread of the virus to attack key installations.

The FOC, who led the operation said this year’s exercise, which was hosted by the Eastern Naval Command in 2016, recorded a lot of achievements as lots of vessels that were involved in illegalities were arrested, which he said gave the seafarers confidence to once again ply the waters.

He said: “If you look back, about four or five years before then, there was concern about ships calling at Nigerian ports and that’s why we deemed it important to once again re-enact Exercise Treasure Guard 11 to increase the confidence of the global shipping community in Nigeria waters.

“We have been preparing for over three months because we have had series of coordinating conferences with international partners as well as with maritime law enforcement agencies so the cancellation of the OBANGAME Express did not really have any adverse impact on our preparations as you can see, all the ships have taken their logistics provided by the naval headquarters and we are good to go.”

He commended the Chief of Naval Staff (CNS), Vice Admiral Ibok-Ete Ibas on his commitment in ensuring that the Nigerian Navy continued to collaborate with other maritime agencies.

“It is very important that we acknowledge the Chief of the Naval Staff for approving the transmutation of the Nigerian leg of Exercise OBAGAME EXPRESS 2020 which was cancelled due to the health concerns. The approval of Exercise Treasure Guard 11 is a clear demonstration of the avowed commitment of the CNS to harness and deploy all the capabilities of the navy in conjunction with other agencies. That is to ensure that collectively we secure and protect all the assets in our waters,” he added.

For a show of force, it was an impressive fleet deployment of both ships and aerial power of the Nigerian Navy to sea. The entire fleet at sea was a record of six ships and two helicopters. The Nigerian Navy Special Boat Services (NNSBS) were also deployed for the exercise.

Sea exercises of this nature are designed to work up the ships and personnel in line with NN doctrine of operations, which is also a precursor of the determination to remain combat ready and brace up to meet their mandate. Furthermore, as part of efforts to maintain professionalism and improve personnel capability, sea exercises such as this one are organised periodically. While some involve navies of friendly foreign countries, others are purely carried out by the NN.

Also, so many exercises were conducted ranging from the medical evacuation to Visit, Board, Search and Seizure (VBSS) and then Gunnex. There were also boarding and searching exercises which were simulated like that of real life situations. The scenario showcased how the navy gave chase to a smuggling vessel, boarded and searched it. Armed with the brief, the boarding party gave chase to the vessel, boarded it, searched and made arrests accordingly.

For one of the main exercises at sea, which is the Gunnery Exercise (GUNNEX), all participating ship took part. Having achieved the required formation, other safety measures were taken before the firing took place. Some of the safety measures were activating the fire service water host and putting it on standby for any emergency.

Also, fresh water was used to cool the barrel as it was releasing hails bullet. Meanwhile, the fire alarm was on to intimate the crew about the shooting.

At inquiry, it was discovered that the purpose of the exercise was to test the efficiency of the weaponry, to send a signal that the navy does not only bark but bite as well. Secondly, it also provided ample opportunity to train the men, seeing that it boosts their efficiency and capacity.

The Fleet Commander, Rear Admiral Elkanah Jaiyeola, who was also the tactical commander said the exercise was a fall out from the cancelled exercise OBANGAME Express 2020. All the same, he said this exercise was set up to deal with issues of piracy, illegal unregulated and unreported fishing, human trafficking and sometimes arm trafficking witnessed in the waters.

He said: “The essence of this particular exercise was to consolidate on the efforts of the Nigerian Navy towards ensuring that our treasures within the nation’s maritime water are properly safeguarded and apart from that, it will allow to work with other inter agencies towards ensuring effective coordination and collaborations and that was played it during the exercise”.

“The commencement of the exercise was that of a reported piracy and we combined the efforts of our maritime domain awareness centres. We were alerted of the report and we were able to inform our fellow unit for what we call intelligence surveillance and reconnaissance (ISR) and they were able to identify the location of the vehicle and of course we vectored some of the assigned ships to go intercept, board and find out what happened and also to protect assets in the waters.

“The exercise was conducted in sequences as the first exercise had two folds. The first one was the opposed boarding in a situation of piracy. It is expected that the pirates will want to oppose the attack, as witnessed during the exercise with our special boat services crew, who were able to board and despite the firing, they were able to rescue the seized personnel.

“Aside, you will realise we had an exercise in illegal fishery and report of arms and ammunition. That’s where we had the unopposed boarding where one of our ships was able to board and interrogate and of course we were able to discover some seized weapons. At the gunnery exercise, we were able to test out weapons.”

Analysing the achievements of the exercise, Jaiyeola said apart from the navy, other sister agencies like the NDLEA, Customs, the DIA team, Ministry of Justice also participated in the exercise, which gave room for synergy.

Overall, sea exercises such as this is a necessity for the navy because it is the only way to ascertain the operational state of the force as this will ensure that NN ships are in optimal working capacity to contain the various criminal activities in the Nigerian maritime environment.