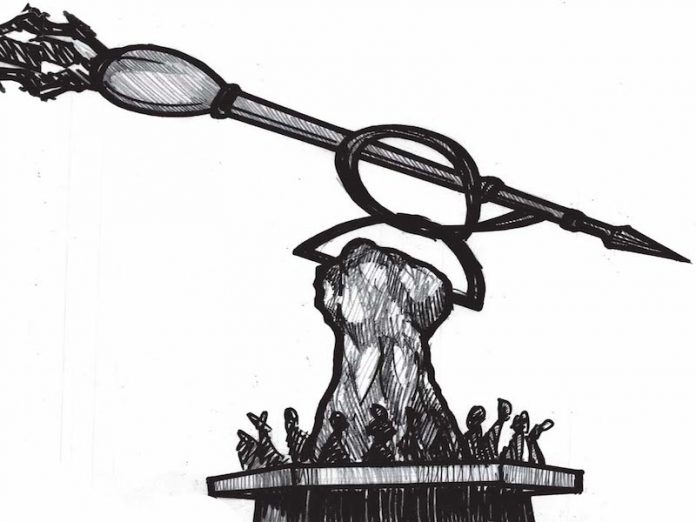 When Nigeria’s President Muhammadu Buhari was named by the African Union as its first “anti-corruption champion in Africa” in 2018, he called on member states to “invest in institutions to entrench transparency and accountability.” But the recent push by many lawmakers from his All Progressives Congress (APC) party to grant themselves immunity from prosecution for corruption would seem to leave Mr Buhari’s national commitment to tackle corruption in tatters and fatally undermined.

The bill, known as “Bill for an Act to Alter Section 308 of the Constitution of the Federal Republic of Nigeria, 1999 to Extend Immunity to Cover Presiding Officers of Legislative Institutions,” has passed the second reading at the House of Representatives. It seeks to amend Section 308 of the constitution to extend immunity to all the principal officers at the country’s National Assembly and the houses of assembly of the states while in office.

Briefly, Section 308 provides that: “no civil or criminal proceedings shall be instituted or continued against the President, Vice President, Governors and Deputy Governors during their period of office.”

The proposed amendment to Section 308 to cover the lawmakers would mean that any criminal or civil action for crime of corruption or other egregious crimes they commit while in office would be stayed until the expiration of their tenure.

The bill first appeared in parliament in 2016 but the lawmakers then backtracked after a public outcry over the move.

In effect, the bill will protect lawmakers from legal consequences for corruption, exacerbate the impunity that prevails in Nigeria’s political circles and worsen the country’s ranking in Transparency International’s Corruption Perception Index. And this would have a negative effect on the human rights of Nigerians.

Since the return of democracy in 1999, several politicians—including governors with allegations of corruption against them — have sought to hide out in the National Assembly. The proposed bill will now make them almost untouchable once they swear their oath of office as lawmakers.

Some lawmakers, including the sponsor of the bill, Odebunmi Olusegun of Ogo-Oluwa/Surulere federal constituency (APC, Oyo), and at least two members of the opposition Peoples Democratic Party (PDP)—Toby Okechukwu (PDP, Enugu) and Nkem-Abonta Uzoma (PDP, Abia) —believe that the bill will protect them from “blackmail” while in office; that fear is misplaced.

The lawmakers are already covered by parliamentary immunity under the Legislative Houses (Powers and Privileges) Act, 2018, which means they are immune from civil or criminal proceedings for anything they say in parliament.

This is a privilege developed to ensure open and fearless debate in parliament and is similar to the situation of lawmakers in the US and UK, where members of parliament cannot be sued for defamation for statements made in parliament, which Nigerian politicians frequently cite as “best practices.”

However, this act doesn’t shield lawmakers from prosecution for crime of corruption or other egregious crimes. The proposed amendment to Section 308 would now extend the immunity provided under the act to shield lawmakers from criminal and civil proceedings, far beyond existing parliamentary privileges and immunities.

The push for immunity for lawmakers ignores the history and legacy of corruption in Nigeria and its impact on human rights. It’s also at odds with Nigeria’s international commitments as a member of the United Nations and the Commonwealth.

There is no legal justification to provide immunity to lawmakers beyond the privileges they already enjoy, as to do so would be antithetical to the fundamental principle that all persons are equal before the law, and to Nigeria’s voluntary obligations under the UN Convention against Corruption, which in article 30(2) requires states parties to limit immunity from investigation, prosecution or adjudication of corruption offences.

Similarly, the Commonwealth Working Group on the Recovery and Repatriation of Assets of Illicit Origin has stated that Heads of State/Government, ministers and other public officials should not have immunity from prosecution for alleged criminal activity.

Lawmakers also argue that if the president, his deputy, state governors and their deputies can enjoy immunity, there is no reason why they should not also enjoy immunity. But it’s difficult to see how granting immunity to lawmakers will aid the fight against grand corruption in the country.

The lawmakers’ “levelling up” strategy is in fact counter-productive, as section 308 of the constitution is already shown to impede disproportionately the conduct of inquiries, prosecutions and the sentencing of the persons it covers, and thereby contributing to the prevailing impunity of politicians for corruption.

Lawmakers’ immunity from prosecution for corruption would fuel perceptions that those charged with the responsibility to make laws for the country are seeking to use their position to stay one step ahead of the law.

Rather than trying to “level up” with the executive—at both the federal and state levels—members of the House of Representatives should push to exclude section 308 or limit its application to cases of corruption and other similar crimes that have an impact on human rights. Doing this will prompt real change in the country’s political culture and help to improve the lawmakers’ image with Nigerians.

If the bill is passed, it will constrain the ability of Mr Buhari’s government to fight corruption, as it will mean that lawmakers will see expanded opportunities to line their pockets and divert scant public resources through, for example, the so-called “Constituency Projects” and with no fear of facing prosecution while they remain in office.

The Independent Corrupt Practices and Other Related Offences Commission (ICPC) already found in a recent report that Nigerian federal lawmakers use the constituency projects as a conduit for pocketing public funds.

This will deny justice to Nigerian victims of human rights violations and abuses caused by corruption.

All human rights can be restricted by corruption, be they economic, social, cultural, civil, or political rights. Opening the door to impunity threatens the rights of all people in Nigeria. The higher levels of corruption, the lesser degree of human rights protection. For example, corruption in the management of public resources and public services denies people their right to education, health and other rights.

Criminal prosecution represents the best hope for holding lawmakers to account for corruption, since Nigerian laws do not currently allow people to pursue cases in civil or human rights action against corrupt politicians.

If lawmakers want to protect themselves from politically motivated charges, they should pass laws to reform and improve the country’s criminal justice system. This will ensure that due process is always observed in corruption cases, including those that involve lawmakers, and that the executive does not use its anti-corruption fight as a tool for political expediency.

Whether the Speaker of the House of Representatives Mr Femi Gbajabiamila will use his leadership position to ensure that the bill is dropped, remains to be seen.

President Muhammadu Buhari’s job of tackling corruption is already complicated enough without immunity for lawmakers. He now must publicly condemn and reject the bill, if he is to be able to deliver on his anti-corruption promises to Nigerians.

It’s time for Mr Buhari’s government to comply in law and in practice with Nigeria’s international obligations and commitments.