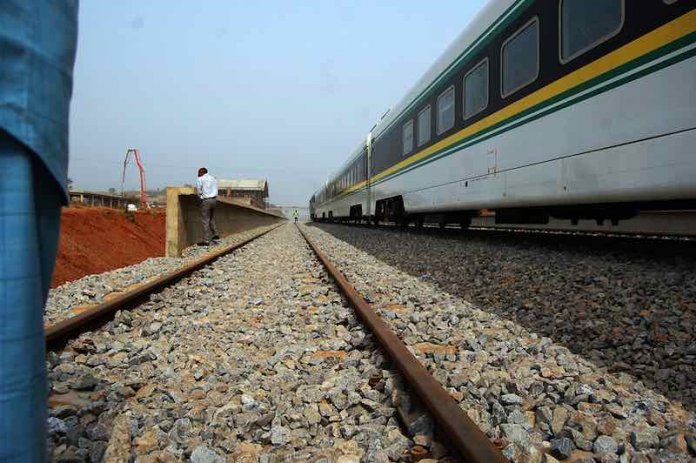 The federal government desires to connect cities, states and even coastal villages. To achieve this, they decided to revive the rail system of transportation. Though more expensive than building roads, its advantages outweighs the cost.

Thus, under this administration of President Muhammadu Buhari, premium has been given to the rail system. Already, progress has been made. The Abuja-Kaduna rail is already in use. With focus on the Lagos-Ibadan rail, it is expected that it will provide linkages, job creation, and also boost trade in the South-west corridor with ripple effect on the national economy.

Therefore, it would be stating the obvious to note that the railway is not just an alternative and comfortable mode of transport, it also holds the master key to transforming commerce in Nigeria and across the continent.

As he is known to do, the Minister of Transportation, Rt. Hon. Rotimi Amaechi, recently embarked on an extensive inspection of the ongoing Lagos-Ibadan Railway project. This he did in company of the
Minister of state for Transportation, Gbemisola Saraki and the Governor of Oyo State, Seyi Makinde and some of his commissioners including the Commissioner for Works and Transport, Professor Raphael Afonja.

Although attention is still on the Lagos-Ibadan Rail, Amaechi has however recently given attention to the Ebute-Metta-Apapa Route. According to a media aide, Gift Okpara, this was in line with his quest to ensure speedy completion of the entire Lagos-Ibadan rail line.

Having achieved a 100 per cent completion of the railway tracks from the Ebute-Metta to Ibadan axis, he said attention will now be shifted to the Ebute-Metta -Apapa route. This according to him, will help to increase the pace of work on the construction of major stations and timely resolve the challenges that may impede construction work on that route.

Amaechi who was accompanied by the Oyo State Governor, Seyi Makinde on the inspection tour of the project said this last Monday in Omi-Adio, Oyo State. He said, “Not much has happened at the Abeokuta station, the worst is from Ebute-Metta to Apapa. To sum it up, it is painful and now, our focus will be shifted to that area”.

Amaechi further said that he would schedule a meeting with the management of Nigeria Port Authority (NPA) so as to find lasting solution to the challenges encountered during construction on the Ebute-Metta to Apapa route.

He explained that the slow pace of work in some stations by the contractors, CCECC was as a result of challenges in clearing materials meant for the stations at the Apapa Port, adding that some minor stations along the rail line had been completed just as the major stations were progressing steadily.

“It’s a mixed bag. In some stations, we are impressed, in others we are not. The last time we came here, we had to suspend work because they were using what we referred to as stone dust”.
Again, the second excuse they gave was that their vessel is still at the sea port. We hope to address this situation when we meet with NPA, as we are really committed to completing this project as soon as possible”, he said.

Meanwhile, Oyo State Governor , Seyi Markinde had said that the ongoing project was a wake up call for the state to brace up and do the needful in order to make the project a seamless success.

He said the project would decongest Lagos and improve the economy through job creation to the people, adding that the state government would assist in the area of road construction and security.

“I can say that so far so good, work is going on and a lot of effort is being put into it. A lot has been achieved so far and a lot still has to be done. The rail will boost our economy and people can work in Lagos and live in Ibadan. Students can attend our schools here, So, it will decongest Lagos and help improve our own economy. We will look into other things that will make the rail operation smooth like the construction of roads and provision of adequate security”, he said.

Four days after the last inspection tour of the Lagos-Ibadan Railway Project, where the minister expressed displeasure over the slow pace of work in which he mounted pressure on the contractors (CCECC) to speed up the level of work, the minister has satisfactorily confirmed that there had been remarkable improvement from the Ebute-Metta to Apapa axis of the project.

At the emergency inspection tour of the area alongside the Chairman of CCECC Group, Zhao Dialong, who was on a visit to the country, Amaechi said, “The last time we were here , I complained about the fact that they were very slow and when their chairman told me that he was coming to visit, I requested that we go to the project site and see how far they have gone.

“There is remarkable progress from the day we came till now. If you look at the roof work at the stations they have completed it in just three to four days and If they continue with that kind of speed, we should commence activity on the track in earnest. Mind you, If we saw the number of workers that we saw today, we wouldn’t have complained”.

Obviously, the contractors (CCECC), had between last Monday and the next time the minister visited redoubled their efforts by engaging more hands to speed up the pace of work on the project and achieve the present level of job completion.

The minister stressed ” moving forward, we have been saying that they should add to their manpower and deploy more equipment to commiserate with the volume of work on ground. Going from here to the seaport, you’ll notice that there is a remarkable improvement, this means that something was initially wrong before the arrival of their chairman. I think, I need to meet with their chairman and have a holistic conversation on how to move forward.”

He said though work was progressing steadily, but much was not really happening at the seaport at the moment, adding that the contractor had assured that work would be intensified from the week ahead.

On whether the completion date of the project was still feasible considering the improvement noticed, the minister said: “As far as I am concerned (mentally) , I’m almost out of Lagos. I’m critically trying to focus on Kano-Kaduna, Ibadan – Ilorin, Ilorin to Minna and then to Abuja”.

On the legal implications of not meeting up with the contractual terms of the project in terms of its completion, Amaechi opined that rather than looking at the law, emphasis should be on the practicality.

According to him, ” the issue about non-completion of the project at the stipulated time frame is complex, the original time for the expiration of the contract is May, but you see, they made an argument which you cannot also fault. The argument they made was for additional works which gave them up to six months, so if you add the six months to the May expiration date, you are probably talking about next year. So, instead of looking at the law, we should look more on practicality and compel them to speed up the pace of work.”

Chairman, CCECC Group, Zhao Dialong said changes in project location affected completion of the stations and tracks, adding, ” We initially designed the projects so that the tracks will be done simultaneously with the stations, we even planned to finish the stations first, but we failed because of changes in location “,he explained.

However the argument turns out, Nigerians are eagerly waiting for the rails to be completed so that they can explore it as a viable alternative to road transport like is being done already on the Abuja-Kaduna rail.