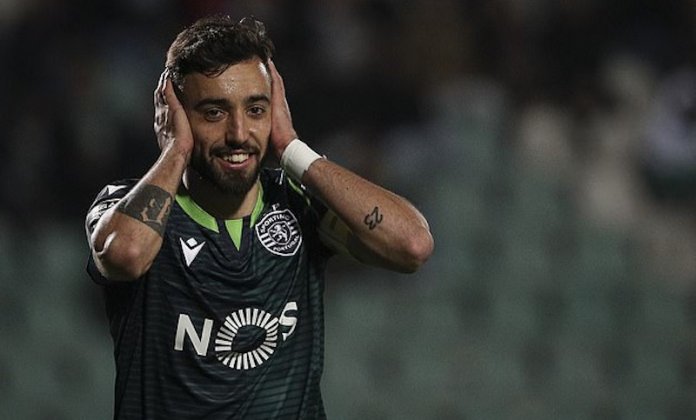 Sporting Lisbon have slapped a ‘take it or leave it’ £60million price tag on their star midfielder Bruno Fernandes amid interest from Manchester United.

The Red Devils have been frustrated in their pursuit of the Portuguese international and are refusing to pay the asking price as things stand.

It is thought the player is keen on a move to Old Trafford, but his club are said to be standing firm on their valuation, according to Portuguese outlet Record.

Any stalling in negotiations between the two clubs could present itself as an opportunity for rivals Manchester City to swoop in and steal the player from under United’s noses, the report claims.

City want to be kept informed about talks between the two sides, it says, and wish to be updated with their latest valuations of the player.

Man United have reportedly put in a £42m bid, with £17m in incentives, although one of the variables included the midfielder winning the Ballon D’or – and was swiftly vetoed, the report adds.

The Portuguese outfit came back saying they would accept no less than £51m with £8.5m coming in add ons. United also proposed the idea of a cash-plus-player deal, but that offer was rejected too.

While negotiations continue for the in-demand star, Fernandes is set to feature for the team in the Portuguese League Cup against Braga tonight.

The 25-year-old also played the full 90 minutes on Friday as Sporting lost 2-0 to their rivals Benfica in the Primeira Liga.

Fernandes is believed to be unhappy with his club at their refusal to let him join United and feels he has shown loyalty and deserves the chance to make the move.