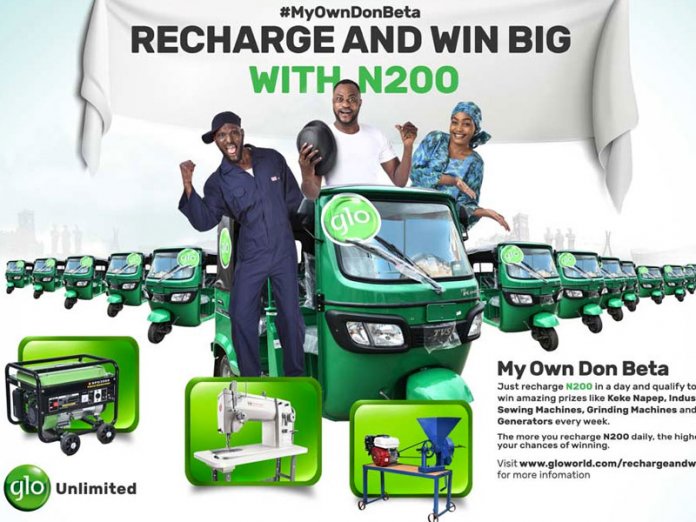 Globacom recently took its ‘Recharge and Win Big’ promo campaign, popularly known as ‘My Own Don Beta,’ to Onitsha.

Hundreds of traders pushed business aside, shut their stalls and gathered at the market square to witness the presentation of prizes to winners in the promo.

While many came to assuage their curiosity, others came to confirm if it was true that Glo was giving out the advertised prizes.

Yet, some others came to rejoice with lucky subscribers who had been invited to receive their prizes that day, having earlier emerged winners in the promo draw held in Kano the week before.

Globacom lived up to its billing of putting smiles on the faces of its subscribers as replicated in Lagos, Port Harcourt, Abuja, Ibadan and Kano prize presentation ceremonies.

For the winners, the joy of winning the various prizes on offer just for recharging their Glo lines with a minimum of N200 and the timeliness of the winnings, the utility value of the prizes and the vista of opportunities they will open made the difference.

Alakwe Nnemeka Stanley, a businessman, smiled home with keke, the promos grand prize. The former keke driver who admitted he had never won any prize in any telecommunications promo assured he would put his prize to good use.
A security officer in Onitsha, Ifeanyi Ikpe, who won an industrial sewing machine said Glo has provided a business for him as he planned to put the machine to good use by learning how to sew, a once elusive dream.
Echoing Ikpe’s sentiments were Alieu Anthony and Ebere Obi. Both won generating sets.

Anthony, an engineer and building contractor who lives at Omoba Phase 2, Onitsha, who considered himself ‘the luckiest man’, planned to use the generator to open a business for his wife.

For Obi, a resident of Awada Obosi and a foodstuff dealer, the generator comes handy as she will use it to boost her business to freeze drinks and water.

“With this generator, my own don beta for NEPA”, Okechukwu Onwuka, an Asaba, Delta State based estate developer, affirmed as he received his generator.

“I will use it in my home. It came at a time I needed to change the old one. Glo has really tried.”
Like many of the winners, Tochukwu Achigwe’s bond with Glo goes beyond the promo. The grinding machine winner who lives in Ogidi, near Onitsha, told the cheering crowd: “Glo is the best in everything, even in data. I just love Glo.”

Two other winners, Ejike Umeogo and Uche Chijioke, the joy of presenting sewing machines they won filled them with emotions as they took delivery of the items.

“I have been using Glo for about 16 years. I am very, very happy. This is the first time I have won something in a promo. The first time they called me, I thought it was a 419, until I went to Glo office and confirmed it is real. I will give it to my wife, she was very happy when I told her about it”, Umeogo, an Obosi-based motor spare parts dealer, said.

Similarly, the testimony of Okoro Igwe Chukwu who won a grinding machine speaks volumes about the impact of the promo: “I am very happy. I will give it to my mother to be used for her grinding mill business. I cannot afford the machine and Glo has given one to me now. Thanks to Glo”.

There was also Cynthia Chidube who said the sewing machine she won has provided the opportunity for her to learn sewing. “I will start fashion designing business before I get admission to further my studies. God bless Glo.”
The Glo train is billed to berth in Jos, Plateau State and other cities to continue its empowerment of Nigerians.