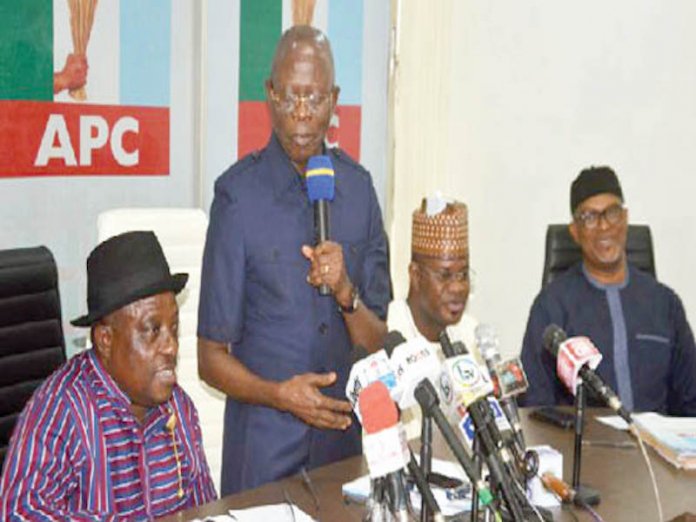 The National Chairman of All Progressives Congress (APC) National Chairman, Adams Oshiomhole, has pleaded with all APC state governors to implement the N30,000 minimum wage and the consequential adjustments.

This is coming as President Muhammdu Buhari yesterday restated that the federal government was committed to improving the welfare of Nigerians.

Oshiomhole made the plea yesterday in Jos at the federal government- Progressives Governors Forum parley in Jos.

“As progressives, let us be the first to pay the new national minimum wage and not just the wage but also the consequential adjustments arising from it.

“Already, there are some proactive progressive governors that have taken steps to address this.

“I plead that you give this a priority, because when other governors are fighting whether or not to pay, you will say that progressive governors have paid.

“Where there is will, there will certainly be a way,” he said.

The APC national chairman also called on the APC governors to support border closure by the federal government.

He said that Nigeria’s borders should remain closed until neighboring countries follow the protocols of fair trade.

Oshiomhole in an interview with journalists, also lent his support to financial autonomy for local governments in the country.

He said that local government autonomy was not negotiable.

He added that local governments should be allowed to operate the same way states operate with the federal government exercising oversight function.

“Local governments should be autonomous, but autonomy doesn’t mean there should not be oversight.

Meanwhile, Buhari also yesterday at the Jos event restated that the federal government was committed to improving the welfare of Nigerians.

The President, who was represented by the Secretary to the Government of the Federation, Boss Mustapha, said that his administration was proud of the achievement of bringing the nation’s economy back on track from recession.

He said that the economy had been placed on the path of growth and competitiveness in the last four years especially in the areas of human capital development, infrastructure development and prosperity.

“In recognition of the importance of humanitarian affairs and disaster management, I recently created a new ministry headed by a minister of full cabinet rank.

“This underscores the focus of my administration in ameliorating the challenges( present and future) faced by Nigerians, especially the vulnerable ones.

“Records abound to show that the federal government since 2015, has made tremendous progress in different sectors and we are determined to do more,” he said.

Buhari further said that the Federal Government was more determined than ever before to subdue the challenges of insecurity that had remained a big challenge for the country.

He said that his administration had come thus far in its achievements because of the unfaltering support and good will of the state governors.

” I am confident that together we will achieve our objective of building a united and prosperous Nigeria.

“Let me commend your contributions at sub-national levels, to the socio-economic, cultural and political development of Nigeria.

“Analysis have shown that the economic growth is a product of the harmonious collaboration of all tiers of government, particularly in a federal set-up like ours,” he said.

The PGF Chairman and Kebbi State Governor, Alhaji Abubakar Bagudu, said that the forum’s synergy with the Federal Government was aimed at improving governance and improving the lives of Nigerians.

Bagudu said that the parley was to reflect on those key areas the country was grappling with as challenges.

He recalled that the second FG-PGF parley in Birnin-Kebbi in 2017 focused on four key sectors; agriculture, economy, social protection and education.

According to him, this edition would critically assess transportation, health, education and humanitarian and disaster management.

Gov. Simon Lalong of Plateau said that it was a great honour for the state to host the very crucial meeting organised by the Progressive Governors Forum whose focus was to strengthen public service delivery in APC States and the nation.

Lalong said that as an APC state, his administration was fully committed to the party’s vision of providing accountable, responsible and responsive leadership to the people.

THE NEW HELMSMAN AT FAAN