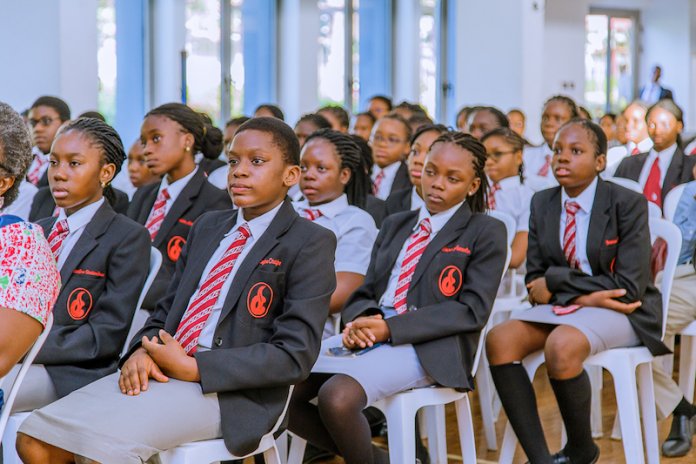 Just as it’s often said at Corona, “you will never be able to score a goal until you take a shot”, Bill Copeland also enunciate that “the trouble with not having a goal is that you can spend your life running up and down the field and never score.”

Hence, setting goals and working hard to achieve them not only sets one on the path of living a purpose-driven life, but makes you a success when they are achieved.
Thus, Corona Secondary School, Agbara gathered together experts and captains of industry to admonish it’s students on how to embrace success during its annual speech and prize-giving day, held on November 17 at the school premises. This year’s theme was ‘Redefining Success’.

Aside students, parents, and staff, the event was well attended by dignitaries such as the Deputy Governor of Ogun State, Chief Mrs. Noimot Salako-Oyedele; the guest speaker/ chairman of the occasion and co-founder, Girafit.com, Mr. Rotimi Ashley-Dejo; Mr. Dotun Suleiman, Mr. Niyi Yusuf, among others.

In her remarks, the Principal of the school, Mrs. Chinedum Oluwadamilola said though true success comes from hard work and dedication, the school is also keen at other aspects of successes.
“This is a time when we as staff and students come together to applaud our achievements and efforts, and for recognising those individuals, teachers and students, and staff who have given a touch of excellence into what they do, who have distinguished themselves by going the extra miles and breaking standing records.

“This recognition hinges on behavioral and academic excellence, as well as sports, clubs and so many other areas. It is based on sound psychological principle of reward and reinforcement.
“Success is such a misconstrued phenomenal, hence the need to situate what it is in the right perspective. True success is what comes from hard work. There is no such thing as overnight success.

“There is a common misconception which equates success with a mere improvement on a previous record. While we concede to the fact that improvement will be part of success, we contend that it does not define it.

“Our understanding is that success involves setting a goal and taking the right steps towards accomplishing it, with later life focus and undeterred success and determination. It is combination of those steps.

“And like we say to our students regularly, you are never going to be able to score a goal until you take a shot. You cannot sit on the sideline and suddenly begin to score goals, you have to take that shot and that is what success is about.”

According to Deji-Ashley “nobody sees you when you decide to be successful until you attain success. This tells you that success goes beyond that decision. The decision is just the beginning.
“And the first key to success is to discover what you are good at, and try your best at it.

Our lives are a series of successes and failures. But if you don’t try something, you can never know if you can attain success in it or otherwise.”
He also debunked the notion that poor academic performance is caused by student’s participation in extracurricular activities, “from research, students who engage in extracurricular activities are also the high flyers academically.

“However, parents’ job is to help them manage their time effectively and not to stop them from extracurricular activities. And parents should stop deciding choice of career for their children. Your job is to guide them in choosing what they are best at; that way, they can glow and amount to success.”

He said for those who were not awarded, “it doesn’t mean they are less successful, as everyone is a success at something,” just as he urged them to believe in themselves and devise a new strategy to achieving their set goals.

From junior classes to senior classes, awards were presented to students who excelled in their academics. Those that made the school proud at national and international levels were also rewarded.
Staff were not left out. From the non-teaching staff to the teaching staff, excellence, outstanding and selfless services among others were rewarded, even as students sang praises of the efforts of all their teachers.

One of the high points of the occasion was the announcement of the ‘Principal Special Award’ winner, a distinguished year 12 student, Fayobomi Olusola-Falodun, for her outstanding commitments in adding value to her fellow students and her polymathy.
Also the ‘Corona Secondary School Best Teacher of the 2018/2019 Session Award’ was won by Mr. Solomon Owolabi, who also won the ‘Most Dedicated Teaching Staff Award’.

Speaking with journalists Fayobomi expressed delight at the recognition bestowed upon her by the principal, a feat she described as unexpected. “I didn’t see this coming; I am just doing what I am supposed to be doing, without even noticing that I was being observed by the principal.

“I am very excited about this award and I want to appreciate the students, staff and everyone at Corona for making this possible. I don’t think I deserve this better than other students who also do some of the things I do, but I must appreciate the principal for so counting me worthy.”

Some of significant feats recorded by the school were the ACCA Foundation Level passed by 10 of the students; last session’s SAT, two studenst scored 1,550, out of the attainable 1,600, making it the second highest SAT score in the world; while many students scored above 300 in the last JAMB UTME and an average score of 272.

“In competitions within the country, we just received a plague from the Association of International School Educators of Nigeria (AISEN); won the US Consulate History competition for the ‘Worlds Women History Month’ and capped it with ‘National History Competition for Nigeria.”

In the academic awards category for the 2018/2019, the school showcased the best top three from year 7-11: In year 7, Oluwamurewa Fadare led with a cumulated 95.61 per cent, followed by Chisom Ike with a cumulated 92.22 per cent while the third position went to Samuel Marquis with 91.28 per cent. Year 8 saw Oyindoubra Akika leading with 93.35 per cent, followed by Ogechukwu Alloh with 88.94 per cent and Iman Ibrahim Imam with 86.88 per cent. Top on the least of year 10 was Tamaramiebi Akika with 92.00 per cent, next was Jay Esemudje with 91.91 per cent and the third position in that category went to Zara Okoli with 85.64 per cent. In year 11, Olumosope Kayode came top with 91.30 per cent, Gbenuola Olaiya came second with 90.80 percent, while the third position went to Ifeoma Osakwe who scored 89.70 per cent.

In a brief chat with journalists, the Deputy Governor of Ogun State, who was the guest of honour, Mrs. Salako-Oyedele said: “Today is another opportunity to reward children that are doing well and in this school, I am particularly glad at the academic achievements and other achievements in other sectors such as sports, drama, art, and most importantly the ‘Principal Award’ which is for the most improved student, because this sort of creates the total child. “Education is something that is very important to the government of Ogun State and to this effect, Governor Dapo Abiodun is doing a lot of work.”

Also speaking, the Chairman, Corona Secondary School Board, Mr. Niyi Yusuf said the occasion was to “celebrate and recognise the performances of outstanding students and staff in terms of academics, behavioral, sports, clubs and associations. And the point we are trying to make with the theme is that excellence is in all students, we only need to find it.”

The Head-Boy, Gbenuola Olaiya said the highest point for him was the recognition of teachers. “They do a lot to ensure that we are at our best and they hardly get the glory, we do. Hence I am grateful to them and glad the management also recognised their efforts.”