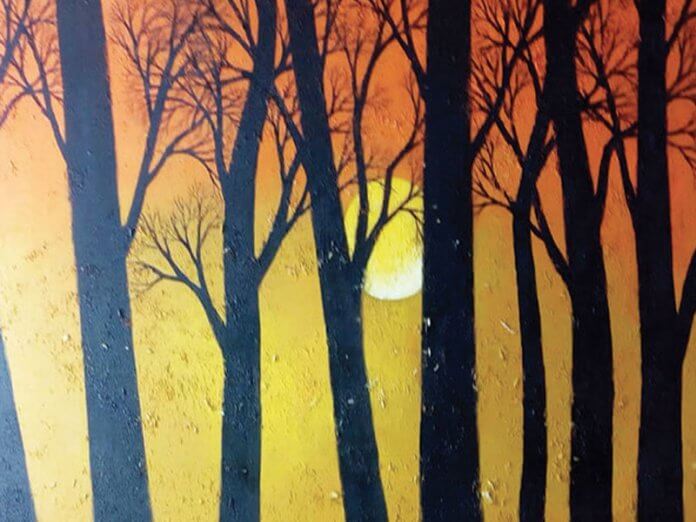 For those who are familiar with this talented artist, ZinnoOrara, “Standing Tall” has nothing to do with his physique although he was a most-sought after male model in Nigeria back in the 90s. In his thirty years of studio practice, Orarahas demonstrated that art is a full-time job through hard work. Beneath the stairs that wound up at the Terra Kulture gallery, Victoria Island, Lagos, he recounted his ground-breaking moment on the Lagos art scene after graduating with a distinction at the Auchi Polytechnic.

During his National Youth Service programme, he was involved in a national exhibition held in Abuja where the Head of State, Ibrahim Babangida encountered his eclectic pieces and advised himnot to look for any white-collar job. That same advice came from many other people, fanning the embers of passion for the arts that he had nursed as a young child.

“As a child, I would draw on any surface. My parents were both teachers. I lost my father at the age of 8. He died at 36. Mid-way into secondary school, I won a national prize in Fine Art. When I got back home, I told my mother. She acted like she didn’t hear me. There was no one to guide me,” he recalled.

Meanwhile, he gained admission to the University of Benin to study Geography and Regional Planning which he didn’t. Instead, a friend of his at the Auchi Polytechnic persuaded him to come over to the Art school. Orara, who had made A1 in Fine Art, decided to sneak off with the friend. They found the Head of Painting Department, Dr. Adejumo who was intrigued by Orara’s old painting from secondary school days. He was offered an admission letter. Orara graduated as the best in his class with an unbeatable record set till date.

It came as no surprise when he was invited by Didi Museum for his first solo exhibition in 1991. Since then, his works had been exhibited internationally with huge financial returns. Then tragedy struck. His wife was diagnosed with cancer and the battle lasted nine years.

“That brought me to my knees. I lost everything that I had worked for. I had four little children- ten, nine, six and two. I have no brother or sister,” he recounted. In the heat of trying to save his wife, he organised a charity exhibition at MydrimGallery in partnership with Black House Media in December 2014. That was his first encounter with this reporter.

“You met me when I had just sold two houses,” Orararecalled, adding that four exotic cars were also sold in an effort to save his wife, Adaora. The charity show which was titled, “Against All Odds” was on-going when Adaora passed on. “I was shattered. She died in my arms and in the presence of our children.”

Orara blanked out and couldn’t paint. The burden of grief and care for the young children had been overwhelming. Five years gone, Orara is returning to the art scene with 45 worksin mixed media and textured surfaces. His new body of works contrast the previous one where red was a predominant colour.

“I’m happier now. You can see that from the titles of my worksuch as “Standing Tall”, “Still Hopeful”, “The Bridge”, “The Triumph” and “Pregnant Possibilities,” he said with smiles. Orara’s new pieces are reflective of social realities and his philosophical ideas. For instance, the work titled, “A Stitch in Time Saves Nine,” is based on the principle of not allowing things or relationships to degenerate.

“That was inspired by the state of our roads. You see a pothole today and instead of fixing it, you allow it to get bigger,” he explained.

Orara has 15 solo shows in his oeuvre. His show which opens tomorrow at Terra Kulture runs till November 25.