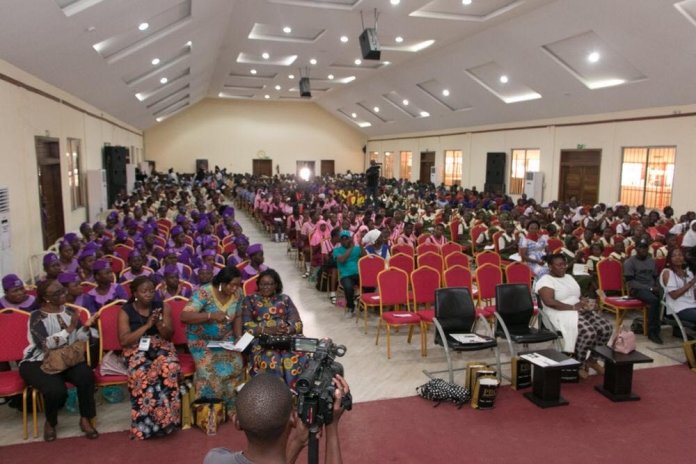 The International Day of the Girl-child , also known as ‘Day of Girl’, is an internationally observed day declared by the United Nations, is commemorated every October 11 since 2012, to celebrate and advocate for the welfare of the girl-child.

This annual event is marked world over and Nigeria is no exception. Commemorating this event, Bimbo Odukoya Foundation held its annual Girls’ Empowered Conference; an initiative of the foundation aimed at promoting Science, Technology, Engineering and Math (STEM), amongst female students in secondary schools.

The event which was held at the multipurpose hall of the Fountain of Life Church, Ilupeju Lagos, had in attendance 1280 female student representatives from over 21 junior and senior secondary schools in Lagos and 217 teachers, sponsors and partners of the foundation.

Delivering the keynote speech, C.E.O of the Michael Ekwemalor Foundation, Mr. Michael Ekwemalor, encouraged the girl-child to believe in their ability to aspire to the desired professional height they can attain.

Using the Chairman, First bank Group, Mrs. Ibukun Awosika, and the Minister of Finance, Mrs. Zainab Ahmed, as feminine role models to the girls, he urged them to be willing to learn and  also be empowered, so they can attain and exceed their feats, adding that, “the presence of any female in a society can be attributed to the earth’s salt, hence they remain trailblazers”.

Sensitising the students on the effects of drug abuse and why they need to shun it, a Drug Abuse Expert and Campaigner for Social Justice under the name STAMPOUT, Mr. Olufemi Silas, acknowledged that the scourge of drug abuse is fast becoming a national challenge amongst youths.

In a short video illustration entitled ‘Before and After’; before drugs, and after drugs experience stories of drug addicted celebrities around the world were told.

From the story, Silas pointed out that recent statistics has proven that “one out of every four drug addict is a female.” He also described drug abuse as a “harmful use of psychoactive substance; either as depressant, stimulant or hallucinogens”,

He urged that even when drugs will be taken for health purposes, it must be according to the doctor’s prescription. Silas likewise took time to unearth drug code names such as jiko, lakatomtom, omi gutter and skoochies as some of the local parlance used for drugs, urging the girl child to “desist from experimentations, peer pressure, inducements that can lead to such act”.

Taekwondo Coach and Self- Defense Expert, Ms. Thursdaline Peters gave tips on how a girl-child can protect themselves against sexual abuse. She explained self-defense as the defense of one’s self or loved one from confrontational action or speech.

She reeled out the ABCDs of self-defense as; “A- Avoidance and Awareness, B- Be Calm, Be Bold, Breathe In and Breathe Out (this will help to create calmness before taking action), C- Communicate with confidence, D- Defense (This should be used when A B and C are not working.”

She likewise taught the girls that “necklace, bangles, biro, whistles and tail comb, are handy weapons for ladies when under any unwarranted physical assault”.

Director of Unite Cisco Network, Mrs. Toyin Olutayo, who spoke on the importance of technology and how the girl-child can plug into the fourth revolution global trend of development, gave a wakeup call to instructors of learning, to start delivering an educational system that makes school leavers more entrepreneurial minded instead of looking for jobs, as technology is fast replacing human roles.

Toyin noted that, “there are spaces in the technological sector such as cyber security experts, email technology, application developments to still be filled and the girls can assume, and dominate these spaces.”

The Coordinator, Bimbo Odukoya Foundation, Mrs. Aderonke Oyelakin in her charge, said a girl-child must have a safe, healthy and caring environment to grow, learn and excel.

According to her, “this will help in instilling confidence in them hence helping them to channel their strength in chasing their dreams and achieving their goals in life. Let us celebrate the laudable achievements of our daughters to make them unstoppable.”

Also speaking, the Project Officer of the Foundation, Mr. Ese Akpovona added that there is a need to stop gender stereotyping. According to him, “we should stop gender stereotypes. Girls can be more if given the opportunity to thrive and express themselves in different fields of work including STEM.”

In a closing remark, the Deputy Chairman of the Board of Trustees of the Foundation, Pastor Mrs. Omolara Adesanya, who is also the eldest sister to late Bimbo Odukoya, promised that the programme “will continue to advocate for the betterment of the girl child, as this was the vision of the founder in blessed memory”.

In an interview with THISDAY, some participating students, from different schools, expressed their delight about the initiative, even as they called on the government and other stakeholders to take a clue from the foundation, and do more in the area of protecting the girl-child and empowering them to become better nation builders as they are known to be.