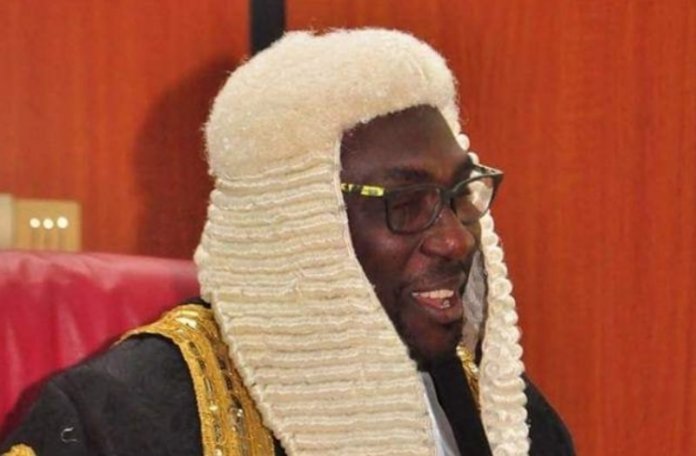 The fate of the Speaker of Bayelsa State House of Assembly, Emmanuel Isenah, remained unknown yesterday, following his ‘impeachment’ by his colleagues over his refusal to resign after an alleged deal with the state leadership of the Peoples Democratic Party (PDP) to step down.

THISDAY learnt that since he hails from the same area as the PDP governorship candidate in the November 16 gubernatorial election in the state, Douye Diri, key leaders of the party, including Governor Seriake Dickson, have been mounting pressure on him to relinquish the seat.

The intervention of the security agencies did not seem to help matters as several gunshots were heard in the Assembly premises with some hoodlums allegedly loyal to the speaker carting away the mace, the symbol of authority of the legislative arm.

Security personnel, including officers from the Department of State Services (DSS), who arrived in at least 10 security vehicles, took over the Bayelsa House of Assembly complex, while scores of other security personnel were deployed to maintain the peace.

Those who insisted that the “impeached speaker” should step down hinged their argument on the need to balance the power sharing formula in the state, saying Diri and Isenah hail from Kolokuma/Opokuma Local Government Area of the state.

However, in an interview, Isenah said he remains speaker, noting that he was not aware of any deal with anybody to step down after three months as reported in some quarters.

According to him, “I went to the House and as usual we entered the chambers to hold our usual plenary. It should be noted that almost all the Houses of Assembly in Nigeria went on recess after election, including the National Assembly.

“We have been struggling and hadn’t got what we needed for us to go on recess. So, we got tired. I presided over the plenary today, where I expressed my gratitude to all the lawmakers. After the plenary, we adjourned sitting sine die and we went on recess. I was taken aback to hear another story altogether. There’s nothing that will be done in that House for now that will hold water because we are on recess.”

He argued that Bayelsa State House of Assembly like others should maintain its independence, noting that the separation of powers as guaranteed by the constitution must be strictly adhered to.

Isenah said: “I presided as the Speaker of the House, not as an impeached speaker or one that resigned. I am the authentic speaker of the House and we have adjourned plenary indefinitely. Any other thing that happened in that House without me reconvening the House is illegal and that is what the public should understand.

“Bayelsa State House of Assembly is an institution and a different arm of government. That arm needs to be respected and the ideals of the separation of powers need to be respected.

“Any member who has decided to stay back to do any other thing is on his own, because the sergeant-at-arms escorted me out of the chamber. Nobody can reconvene the House except me. Anything other than this is an act of illegality.”

He refuted insinuations that he brought thugs into the Assembly premises, stressing that he’s a peaceful person. “Maybe security people were shooting when they were running around. I am not a violent person. Maybe the security wanted to scare the people. I don’t know,” he noted.

The speaker added: “I didn’t have any arrangement with anybody. At the appropriate time, I will address Bayelsans and tell them what transpired. Anyone who said I promised to resign in three months should be bold enough to come forward to present such documents me and to the people of Bayelsa State.

“I want the people of Bayelsa State to note that the Assembly is an independent arm of government. If I have not done anything wrong, I don’t see any reason why I should be asked to resign. If I have fallen short of the law, it is a different thing. I am not resigning. I have not said I wanted to resign. I am still the Speaker. Everything else should be discountenanced.”

Meanwhile, the Leader of Bayelsa State House of Assembly, representing Southern Ijaw Constituency 3, Monday Obolo, has been elected as the “new Speaker” of the Assembly following the “removal” of Isenah, who was accused of gross misconduct and dereliction of duty.

The motion for Isenah’s impeachment was moved by the House member representing Sagbama Constituency 2, Bernard Kenebai, under matters of urgent public importance and supported by 18 other members of the House.

Presiding over the exercise, the Deputy Speaker, Sylva Ngobere, representing Brass Constituency 3, said the House unanimously agreed on the petition to remove Isenah.

There had been agitation from Southern Ijaw where the All Progressives Congress (APC) candidate, David Lyon, hails from, for the re-arrangement of the power sharing system to ensure PDP gets enough votes from the area, which has the second highest voting population in the state, outside Yenagoa, the state capital.