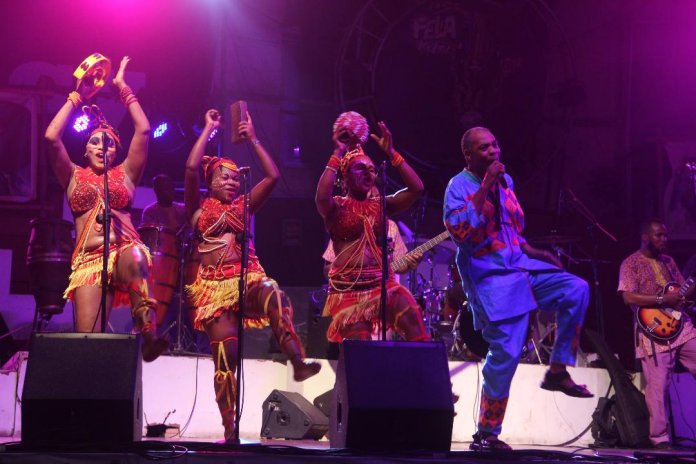 ‘Eyes of a Lagos Boy’ photographer Bolaji Alonge, will present an outdoor photo
exhibition on Femi Kuti, the scion of Fela Anikulapo-Kuti, at Freedom Park Lagos during Felabration 2019. Felabration is an annual music festival conceived in memory and celebration of Fela Kuti, a Nigerian music
legend and human rights activist known
for pioneering afrobeat. Femi Kuti is Fela Anikulapo-Kuti’s eldest son and the strongest proponent of his legacy. Felabration is held during the week of Fela’s birthday.

The week-long event is held held at the New Afrika Shrine in Ikeja and at Freedom Park, Lagos Island. It attracts visitors from all over the world and has thus been considered as an official tourist destination by the Lagos State Government. Bolaji Alonge is an iconic artist, photographer and actor from Lagos, Nigeria with more than a decade of experience in documenting history through his
photographic exploration around the world.

In May 2017, Bolaji organized his “Eyes of a Lagos Boy” photo exhibition at Freedom
Park in Lagos. His second solo exhibition “Urban Culture – Historical Continuity” was held at One Draw Gallery, Ikoyi, Lagos in November 2018. In February 2019, Bolaji showcased his work at Baza Studio in New York.

A third solo exhibition, “Black & White” was hosted at Quintessence, Lagos in July 2019. The Femi Kuti photo exhibition is organized with the support of Chocolate City Music, in cooperation with Freedom Park and Felabration 2019.