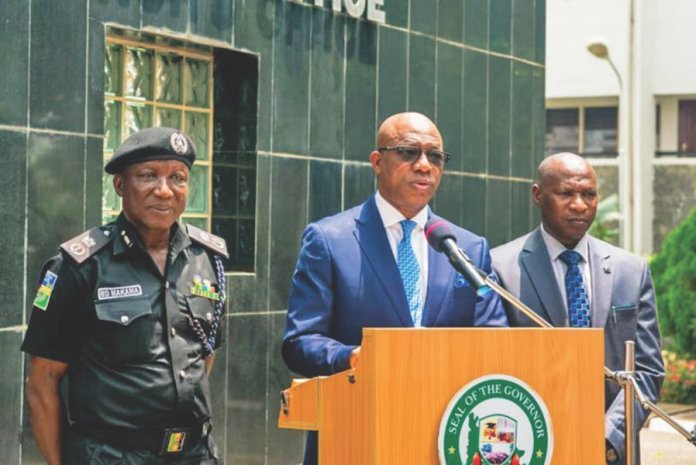 Security of life and property is vital for continuous peaceful existence. Owing to the premium placed on the provision of adequate security, governments, at both the federal and state levels, have come to realise that the primary responsibility for security resides not only in them, but it is also the collective task of all and sundry. Corporate bodies, individuals, federal and state governments pool their resources for the provision of the required crime-fighting equipment and personnel.

Thus, huge fortunes are spent in the provision of modern crime-fighting equipment. While taking a cue from the Lagos State model, the Ogun State Governor, Prince Dapo Abiodun, is poised to replicate the same feat.

The governor, while playing host to critical stakeholders of the state recently, said: “Good governance is being concerned about the welfare of the people.” The governor strongly believes that the most difficult and most disturbing issue today is security.
Ogun State has the largest number of industries in the country, and this is largely due to its geographical location which is responsible for it being christened a “Gateway state”.

With Lagos, at a time, being the Federal capital of Nigeria, on account of the access to sea port, most of these companies found it convenient to stay in Lagos.

Abiodun said: “But the Federal capital was moved to Abuja when it became obvious that Lagos became congested and soon afterwards, the next state of reckoning for potential investors is to come knocking at the neighbouring Ogun State.”

As the name implies, “Gateway State”, Lagos/Ibadan expressway passes through the state and with that, it is bordered by other states. So, also, it shares common borders with the Republic of Benin, and this comes with security challenges.

If they chase criminals from Lagos they are coming to Ogun state. The issue of security is being taken seriously, because there is no way to convince potential investors to come and invest in a state with insecurity.

Basically, investors can’t operate under conditions that can’t guarantee their peace and safety.

In Ogun State today, many industries that have at one time or another, been operating in the “Centre of Excellence” have been pushed out of Lagos and are now berthed in the Gateway State.

“Plans are underway to rejig the state’s Security Trust Fund which was in place before, but has got nothing to show for. A bill already sent to the House of Assembly for amendments is to allow the security trust fund to function like it should do, as obtainable in Lagos.

The objective of the fund will be to provide to security agencies, things that they need to ensure that they are able to police and protect the state adequately.

“Procurement of vehicles, communication equipment, kits, drones, investment in tracking devices and motivation for the personnel are germane to complement the efforts of the police and other sister agencies responsible in crime-fighting.

This will go a long way to discourage banditry, cultism, kidnapping and other violent crimes and ensure that Ogun State is indeed safe for all and sundry to live, to work and to establish their presence and industries.”

Jolted by the recent abduction of five members of the Redeemed Christian Church of God (RCCG), Abiodun took a bold step and called for a total rejig of the security architecture of the state. At a press conference held at the governor’s office, Abeokuta, on Wednesday, August 7, 2019, Abiodun read the riot act to criminals operating in the state to have a rethink or steer clear.

He said: “We will appreciate that we occupy a unique position in our country and we are a gateway to the fifth biggest economy on the continent and also the gateway to the rest of this country. So, any issue that pertains to security, it is of extreme importance to us in Ogun State.
“You will recall that there were two cases of kidnap along Lagos Ibadan expressway, involving seven victims in all. That was between the 23rd and 24th of July, 2019, and another one on Thursday, 1st of August, 2019, along Sagamu- Benin- Ore expressway, involving five victims, including Deaconess Chidinma Ebeleji of the Redeemed Christian Church of God.

“We give all the glory to the Almighty God that the quick intervention of the men and officers of our security agencies have brought this to a positive conclusion. All victims of the two cases have been rescued unhurt, while most of the suspects have been arrested.

“Let me specially thank our dear President, Muhammadu Buhari, and the Inspector General of Police, Mohammed Adamu, for their quick deployment of men, resources, equipment and the helicopter, which he made available for our use. Since then, they will continue to remain in our use. Till now, this has made the rescue of the victims and arrest of the suspects possible. The suspects are currently helping with our investigation.
“Distinguished ladies and gentlemen, the three incidents are a test of our resolve and we have demonstrated in clear terms our strong commitments to ensure that our dear state will continue to be secure for our people and all those who have made our dear state their home.
“Let me assure our people that we are committed to giving Ogun State and her people focused and qualitative governance and we are committed to creating the enabling environment for a Public Private Sector partnership, which we believe is fundamental to the economic growth of this state and the individual prosperity of our people. In doing this, we do appreciate the very pivotal and vital roles of security, a secured environment is imperative towards the promotion of investments. This is why we consider security as one of our topmost enablers in our building our security together agenda. We will continue to ensure that our people go about their legitimate enterprises and businesses in a secured and safe Ogun state.

“Let me state in clear terms that no part of Ogun State is haven for criminals and criminality in whatever form, whether on Lagos-Ibadan expressway, Sagamu-Benin-Ore Expressway, Abeokuta-Sango-Lagos Expressway or, even our township roads or interstate roads, we shall smoke them out. We shall arrest them. We shall hand them over to the sweet arms of justice. For people with legitimate businesses, let me assure you that Ogun State will continue to be a paradise. People with criminal tendencies, hell for you will be a child’s play.

“In doing this, all of us who have decided to make Ogun State a dear home, will have to cooperate, collaborate and synergize with our law enforcement agencies. We also have to support our agencies by giving them information of any suspicious movement of people. These criminals are not ghost; they are not spirits; and they are human beings. They live with us; they live within us; we should; and we must fish them out.

“Let me use this opportunity to sound this very strong note of warning to our landlords and any property owner, that any property or facility, found to be serving as hideout to criminals will not only be taken over, but we will demolish them; the landlords will also be arrested; and handed over for prosecution for harboring criminals. We will consider and treat them as accomplices. We are working towards strengthening our security apparatus in the state, details of which we won’t reveal. “25 metres away from Sagamu to Ogun Waterside, I have directed the clearing of the bushes on the highways in order to pave ways for visibility for motorists plying the expressway.”

While playing host to Remo League of Alfas and Imams on Monday, August 12, 2019, Abiodun issued stern warning to kidnappers either to turn a new leaf or face the wrath of the law.

According to him, the state government is considering sending a Bill that will attract death penalty for kidnapping suspects to the State House of Assembly for legislative action.

Thus, the governor described kidnapping as economic crime that must be brought to a halt by all means.
“We do not want criminals to cause problems for us. The state hosts a lot of companies and industries. It will not augur well to hear that crime is prevalent in our State.”