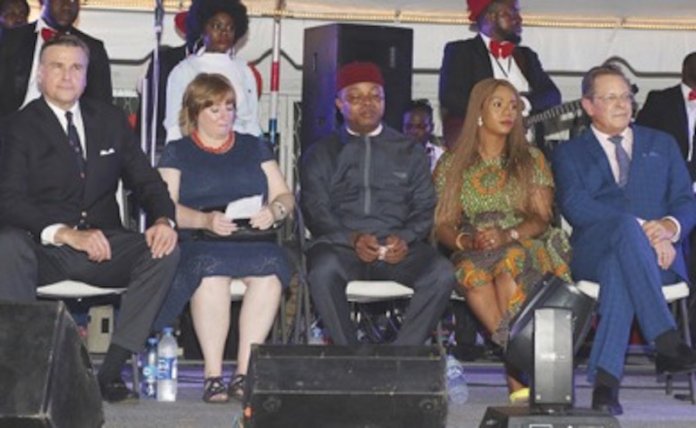 The atmosphere was exhilarating as the vibes coming from the band further charged the environment. The crowd drawn from all sectors of the economy later added colour to the atmosphere in their colourful attire as they trooped into the expansive residence of their host in Ikoyi. Indeed, it was an evening of pomp and pageantry as America serenaded Nigerians in an impressive way to mark this year’s independence. On Tuesday, July 2, 2019, United States Ambassador to Nigeria, W. Stuart Symington and the Consul-General, Mr. F. John Bray hosted dignitaries to celebrate 243 Independence anniversary of a country regarded as the most powerful in the world. This year, America added glamour to its celebration by introducing fireworks, which rocked the skies to the admiration of all the invited guests.

As early as 5 pm, Nigeria’s high society trooped out: from the past governors, banking chiefs, captains of industry, traditional rulers, the media and the diplomatic community. The soul music from a band provided an ambience of comfort for all invited guests as they smiled, exchanged banters catching up with old times. The hospitality of the Americans was also on display as there was enough food just as drinks flowed freely.

In his address, Ambassador Symington extolled the virtue of Nigeria despite its ethnicity. According to him, Nigeria is not just a country; Nigeria is not just a nation. Nigeria was not just drawn on a map to bind first as a colony and later as free women and men. This country, Nigeria, is an idea, an idea very familiar to every American.
“It is an idea that people who speak 497 different languages that are twice as many languages that are spoken on any given day in the United Nations, 497 different tongues coming together, Nigeria is the idea.

“This, by the way, for 243 years, it has been the dream of the United States to take people separated and divided into colonies with different rulers and bring them together as a nation. The Nigerian idea is an idea that is truly shared by the US.”

Speaking further, Symington said:: “What makes a nation are people and infrastructural development. And this according to him can only be achieved by educating and empowering every girl and every woman so that they can see their future with two eyes and can grab it with two arms and not one.
“A great asset to Nigeria is for all those who lead and all the subjects they represent, to come together to make this nation one nation bound in freedom with peace and unity and in this process, you can count on the US for we believe in your ideas and we profoundly believe in you. We also believe that the world will be better if it begins with Nigeria.”

The representative of the Ministry of Foreign affairs, Obioma Nzewuji, said Nigeria is happy to celebrate the very essence of American progress, the spirit that defines the unity of its people for more than two centuries. Both countries have collaborated in different fields and the United States has demonstrated to be a trusted and reliable friend to Nigeria.

Nzewuji said, “We express profound appreciation to the United States government for the various forms of assistance given to Nigeria over the years, especially more recently in our fight against insurgency in the North-East. The humanitarian aids provided by the US Agency for International Development (USAID) does a demonstration of goodwill and cordiality exist between our two countries.”