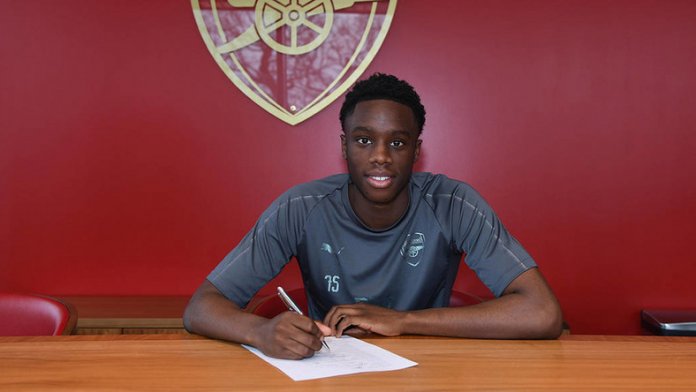 With several of Arsenal first-team players absent from training due to international engagements, Arsenal Manager, Unai Emery, on Tuesday promoted 18-year-old promising Nigerian midfielder, James Olayinka to the Gunners first-team training. Having been first given such opportunity last year but failed to make the most of it, can the English junior international cash-in on this on this rear prospect this time around?

Promising Nigerian midfielder James Olayinka was invited to train with Arsenal first team by manager Unai Emery on Monday, due to a number of first-team players absent from training due to international commitments, including Super Eagles midfielder Alex Iwobi, the Spanish tactician called up Olayinka and three promising youngsters to join the first team at London Colney.

A product of Arsenal’s Hale End Academy, the 18-year-old Olayinka penned his first professional contract in January 2019, 12 years after he joined the club.

Predominantly a defensive-minded midfielder, Olayinka scored his first competitive goal for Arsenal youth teams in the 7-0 demolition of Leicester City U-18 in August 2018.

He trained with Arsenal’s first-team as a first-year scholar in November 2017 and was in the travelling party for a warm-weather training camp in Dubai, United Arab Emirates four months ago.

Olayinka described himself as a box-to-box attacking midfielder, and out of all the players in the first team, “I think my style is closest to Aaron Ramsey.”

“In that position you need to have a lot of stamina and determination, and what’s crucial is the timing of your runs. The last few seconds are the most important. Ramsey is very good at that and it’s an area that comes naturally to me, but I’m always working to improve.

“There’s the other side of the game too, defending, which I’m developing, and I find that helps my attacking play too. If you intercept or win a tackle higher up the pitch, you’re already in a position to threaten the opposition goal. Tackling, intercepting and heading are areas that I’m working extra hard on but also my finishing too.

“I want to add more goals so practising my finishing is very important for a player like me. I’m also working on improving my forward passing as I have a responsibility to develop moves and provide assists.

“I’ve been playing football in a team since I was four years old but was spotted by an Arsenal scout, Steve Higgins, when I was seven. I was playing for my local team, Northwood FC. There was an Arsenal feeder training centre in Ruislip that was run by Steve. I attended the sessions there and was invited for a trial at Hale End. I was signed within a week or so and travelled to Hale End for training from then on,” Olayinka said.

He was a winger when he first joined but was moved into midfield by the Arsenal coaches when he was an under-10. Though he enjoyed playing on the wing he really loves where he plays now.

“I feel I’ve settled well into full-time training. It took a little time to adapt but I feel stronger and fitter now,” he noted.

The experience of travelling with the U-23s and seeing the games close up was really useful to him last season, as he could see that there is no room for mistakes.

“With the U-18s you might have a chance to get away with an error but at the higher age group, any errors tend to be punished. The pace is quicker too and, as I say, I am really keen to apply myself at that level.

“My proudest moments have come with Arsenal. Winning the Futures Cup in 2016 was a high point, as was being voted ‘Most Promising Player’ in the Pineto Calcio Tournament in Italy. We got knocked out in the semi-finals of that but the fact that I received that award when there were so many good players there, not just from Arsenal but also Juventus, Inter Milan and other top sides, made it special for me. Hopefully, we will win more in the future so that I can add to these highlights,” Olayinka said.

The youngster who was born on October 5, 2000, has decided to commit his long-term future to the London-based team now that he is 18 and joins players of Nigerian descents Bukayo Saka and Arthur Okonkwo who signed new deals in summer of 2018.

Olayinka has been with the Gunners since he was11 and has featured across several youth teams.

Speaking to the Arsenal website upon signing his new contract earlier in January, Olayinka stated that he was glad to be able to sign his first professional deal.

He said, “It’s a great feeling. I’ve been here for about 11 or 12 years now, so to finally get to this stage is a dream come true. It’s a proud moment for me and my family.”

He said, “For all of us below them I think it gives us hope and lets us know that if you are doing the right things on the pitch and off it, the manager will see it and give you the opportunity. It’s just about taking it when it comes.

“Personally I just want to keep playing well and score a few more goals for the team. In terms of targets for the team, I think we can do better in the Premier League 2 and start picking up some more points, and for the u-18s we’re still in the FA Youth Cup. We’re in the last 16 now so it’s a good chance for us to go one stage further than last year.”

Olayinka hopes to follow Saka who is the first player born in 2000 to play for the Gunners.

Despite playing for several England youth teams, Olayinka is still eligible to play for the Super Eagles of Nigeria.