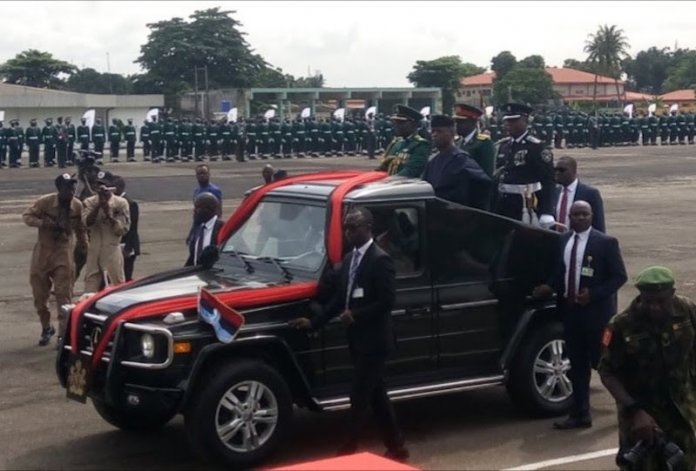 •Says they are irresponsible, so there are no terms of reference for peace
•Commends military for keeping Nigeria together

Vice President Yemi Osinbajo yesterday called on Muslims and Christians to unite against radical Islamist terrorism, stressing that it was a common enemy of all faiths.
Osinbajo urged Christians and Muslims to unite against fanatics committed to a twisted creed, which exploited the tenets of Islam, poverty, and exclusion “to recruit men and women and use children to perpetuate the most heinous atrocities.”

The vice president spoke at the 2019 Nigerian Army Day Celebration and Combat Support Arms Training Week held at the Ikeja Cantonment, in Lagos. He said terrorists did not have responsible grievances and, therefore, no terms of reference for peace.

According to him, radical Islamic terrorism “is an evil that must be seen as the common enemy of all faiths, including Islam. As the president said, and I paraphrase, anyone who says Allahu Akbar and goes on to kill is either insane or dangerously ignorant of the tenets of Islam.”

Reassuring the families and friends of captives of the Islamic terrorist group, Boko Haram, that the federal government would ensure their freedom, Osinbajo noted that the administration of President Muhammadu Buhari “will not relent in our efforts to see that all the remaining girls, including Leah Sharibu, are freed and reunited with their families.”
He, however, lamented that the federal government “has seen other threats emerging, even as we have seen a curtailing of the threat represented by Boko Haram.”

Citing the cases of the Islamic State’s West Africa Province (ISWAP) and others currently operating in the Lake Chad islands and parts of Southern Borno, Osinbajo stated, “The likes of Boko Haram, ISIS, ISWAP and many Salafist Jihadist ideologies are expansionist ideologies that feed purely on hate, hatred of any person or group that does not belong to their particular sect.

“They have no responsible grievances. So, there are no terms of reference for peace. They are fanatics committed to a twisted creed. They exploit the ignorance of the tenets of Islam, poverty and exclusion, recruit men and women and use children to perpetuate the most heinous atrocities.”
The vice president noted that such radical Islamic insurgent groups “are motivated by a satanic desire to control communities by murder and terror.

“Whether it is in Iraq, Borno or Syria, their victims are men, women and children, Muslim or Christians, so long as they do not share their sick ideology. They target churches, mosques markets and motor parks, where people gather, using children as human bombs to kill randomly, regardless of tribe or faith.”

Osinbajo explained that the challenge for all Nigerians “is to recognise this extremism for what it is.” He urged all stakeholders “to form alliances across faiths and ethnicities to destroy an evil that confronts us all.”

He said the Fulani herders and farmers’ conflicts, random killings, banditry, and kidnappings, which have been largely attributed to Fulani bandits, in different parts of the country, were extant challenges the Nigerian Army had to intervene occasionally to try to curb.

The vice president assured Nigerians that the security issues “are being seriously tackled by the federal government, working with the states, through a multi-pronged approach. Nobody will be allowed to maim, kill or commit other crimes and escape.

“It is our duty to apprehend and punish these criminals and we are doing and will continue to do so. You will be hearing a lot more about these solutions in the weeks and months ahead. Law enforcement is, of course, an important element of the response.

“We have seen an unprecedented ramping up of the deployment of military personnel – multi-agency intervention squads like Operation Whirlstroke, the training and deployment of Special Forces, new Forward Operating Bases, and so on – to the flashpoints, in the last 18 months.

“Several bandits’ hideouts and camps have been destroyed, and hundreds of arrests have been made, and it is now up to our judicial systems to ensure that justice is meted out not just comprehensively but also in a timely manner.”

He commended the Nigerian Army for fighting hard to uphold the unity of Nigeria, saying the army “has exemplified the ideals of a united country regardless of ethnicity or religion.”

Commending the soldiers’ gallantry and patriotism, he stated, “You have fought side by side with your brothers and sisters of different faiths and ethnicities and you have seen many fall by your side as they paid the supreme sacrifice in battle.”

Osinbajo noted that enemy fire “does not distinguish one tribe from the other; nor does it distinguish one faith from another, the blood of so many and the abounding grace of God has kept this nation together.

“This is why we must never let the self-serving ethnic and religious jingoists, whoever they may be, create the circumstances for strife and bloodshed. This is also an opportunity to remind all Nigerians of the need to live in peace with one another; the importance of choosing unity and tolerance over the impulse to be sectional, vengeful or violent in any way.”
He explained that the primary focus of the Buhari administration was to build on the foundation laid over the last four years, and correct observed lapses.

Osinbajo declared that a key priority of the Buhari government under its Next Level agenda “is the welfare of serving and retired personnel. You have already seen demonstrations of our commitment in this regard, in recent years. We will not relent.

“On this unique day of the Nigerian Army Day Celebration, let me again join millions of Nigerians to thank our Armed Forces, Police and other law enforcement agencies, all working diligently to protect us, at great cost to personal comfort and survival.”
He commended the Chief of Army Staff, Lt.-Gen. Tukur Buratai, for his dedication, patriotism, loyalty and doggedness in leading the Nigerian Army in the fight against terrorism and other security challenges.

In his remarks at the occasion, Buratai said the Army Day was an opportunity to showcase the history, values, achievements and combat capacity of the Nigerian Army. He pledged that the Army would continue to be ruthless towards all the criminal elements that disturbed the peace and security of the country.

He stated, “We are all aware that the country is facing numerous security challenges and this has necessitated our involvement in conducting operations aimed at tackling the numerous nefarious acts of criminal elements to restore sanity to our dear country.
“Our efforts must not be relaxed until we have achieved the complete defeat of insurgency and other criminalities in the country.”

Buratai commended Buhari, the National Assembly, and state governments for their support and encouragement to the Army.
The event was attended by former Head of State, Gen. Yakubu Gowon; Lagos State Deputy Governor, Dr. Obafemi Hamzat; and Kwara State Governor, Mr. AbdulRahman AbdulRazak, among others.