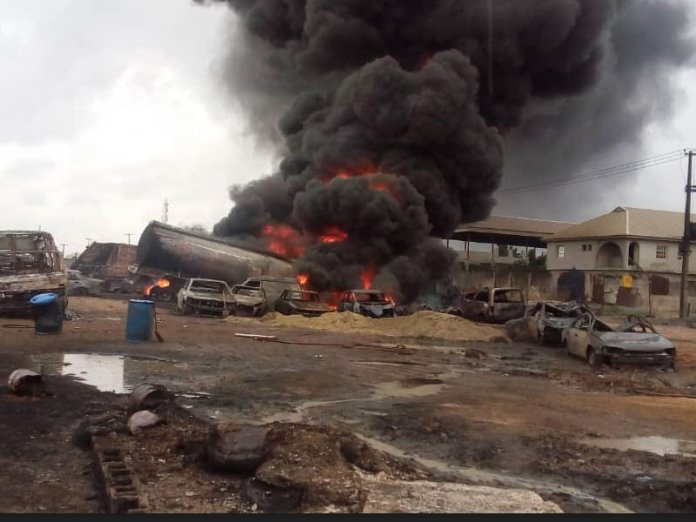 An early morning pipeline explosion Thursday killed three persons, leaving scores injured and 31 cars completely razed at Ijegun, one of the many suburbs of Lagos State.

This is just as the residents have since abandoned and fled their homes as the raging fire unleashed its fury on anything on its path.

This is coming as the Nigerian National Petroleum Corporation (NNPC) has explained that the explosion was caused by vandals who had tampered with its pipelines to illegally siphon petroleum products.

The corporation has however, directed its team of engineers to immediately swing into action.

According to LASEMA’s Chief Executive Officer, Dr. Femi Oke-Osanyintolu, the explosion occurred when security operatives intercepted the suspected vandals who were engaged in illegal siphoning of petroleum product from the NNPC pipeline in the area.

He said the suspected oil thieves had already loaded a 33,000-litre tanker and were on the verge of loading the second tanker of the same capacity when security agents showed up.

In a bid to escape arrest, the suspects were said to have set fire on the pathway, which was then aided by the fuel that spilled in the drainage as a result of the vandalism.

The statement from LASEMA reads, “The above incident occurred this morning July 4, 2019 at 5 a.m. On arrival of LRT (LASEMA Response Team) to the scene of the incident, it was gathered that some vandals were engaged in bunkering activities at Fire Junction, Ijegun within the vicinity where an NNPC pipeline was buried.

“The vandals had already siphoned petrol into a 33,000-litre tanker. While a second tanker of the same capacity was being loaded, security agencies suddenly intercepted the vandals.

“The fire then spread back to the pipeline, the point where the vandals had siphoned the fuel and exploded with escalating fire which led to two fatalities and over 30 vehicles burnt.

“The actual loss will be determined upon conducting post disaster enumeration after the fire has been put out.”

Also confirming the incident, the South-west Spokesperson for the National Emergency Management Agency (NEMA), Mr. Ibrahim Farinloye, said the agency had to alert the safety unit of NNPC to shut down further supplies through the pipelines in order to suffocate the fire.

He said: “NEMA alerted the management of the NNPC on the early morning pipeline vandalisation fire outbreak at Ijegun, Lagos State.

“NEMA also called on the safety unit of the corporation to immediately shut down further supplies through the pipeline in order to suffocate the fire.”

However, the fire still raged for hours despite efforts by emergency workers to put it out.

Reacting to the incident, Farinloye said pipeline fire is a specialised fire management, adding that not all firemen can handle it, except those trained to do that.

He said: “NNPC’s safety firemen are specially trained to handle such delicate incident and that is why NEMA contacted the NNPC to mobilise to the scene.

“It will take time before the inferno can be tackled and this is until the supplies from the pipeline are weak and disabled. When supplies are shutdown, the main source and valves closest to the scene of explosion will gradually starve the fire.

“In as much as lives and properties of the people are not threatened, the fire will be put off as soon as the safety of the fire officers is also assured.”

Meanwhile, NNPC has directed its team of engineers to immediately swing into action at the scene of the pipeline explosion.

The corporation said it was alerted about the fire outbreak, which it said was caused by vandals at the area.

The Group General Manager, Group Public Affairs Division of the NNPC, Mr. Ndu Ughamadu, said the Group Managing Director of the corporation, Dr. Maikanti Baru, has directed the corporation’s team of engineers to resume work at the scene of the incident and redress the situation.

According to Ughamadu, “The fire was ignited when some vandals were scooping fuel from the pipeline. We urge everybody within the community to remain calm as the situation is under control. Our team of engineers has resumed at the site to bring the situation under control.”