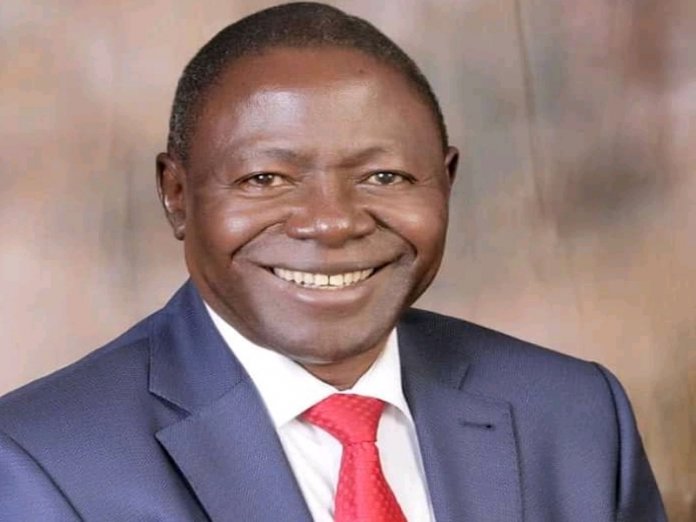 Benjamin Nworie writes that the profile of Senator Julius Ucha has been on the rise since his time as Speaker of the Ebonyi State House of Assembly and later a two-term senator, who engaged an incumbent in the most keenly contested governorship election in the state

The 2019 general elections was another eye-opener for the All Progressives Congress APC), particularly in Ebonyi State. Though the 2019 general election has been won and lost, the outcome has led the APC to review mechanisms on how it fared at the polls. There were also allegations of internal sabotage by APC members in the state. The bulk of sabotage was recorded in the APC. Since its emergence, the APC has known no peace in Ebonyi. Leaders and stakeholders of the party have been at each other’s neck over the control of the party.

Despite the internal crisis in the state chapter of the opposition APC, the task of repositioning for the advancement of electoral fortunes became the major task of a political strategist, Senator Julius Ucha. Ucha is a household name in Ebonyi politics. He was the pioneer Speaker of Ebonyi State House of Assembly and two-term Senator of Ebonyi Central zone from 2003 to 2011.

His influence unsettles his traducers. His political slogan ‘Ucha my Man’ has become an campaign tool in the state. Women, traders and youths feel delighted to call Ucha, their man.
Ucha’s influence made the APC a movement in Ebonyi, drawing members from other political parties. The fear of Ucha began to shrink other parties, including the Peoples Democratic Party (PDP). First, Ucha donated his Humanity Foundation secretariat as temporary office to APC in 2014. An office, APC still maintains till date.

Since the creation of Ebonyi State and return of democratic rule in 1999, the state has been dominated and ruled by the PDP. The PDP continues to hold sway in all elections in the state, always cruising to overwhelming victory. Undoubtedly, any aspirant who scales through the PDP primary automatically begins jubilation in the hope that ultimate victory is assured. The main election may just be a mere formality.

In 2011, Ucha joined the defunct ANPP to contest the governorship of Ebonyi state against Chief Martin Elechi, who was seeking reelection. The election was a major breakthrough for the opposition party. Though Elechi was declared winner, he couldn’t dismiss the fact that
his second term election was a battle of titans in the history of the state. With Ucha’s influence, an opposition ANPP made an inroad to the state house of assembly, winning two seats and one Federal House of Representatives.

Adjudged as the most keenly contested election, the 2011 governorship election between Ucha and the then incumbent Governor Elechi set a new dimension in the polity. For the time, it became clear to Ebonyi people that power of incumbency did not matter and that they could vote for their choice, not minding their political leanings.

There was a rude political re-awakening which started in 2011. From that year, the political consciousness of Ebonyi people changed from wholesale followership of a political party to consideration for individuals, mainly on merit. It brought a time that voters stood firm for their choices. However, instead of consolidating on the strength of the APC, internal leadership crisis took over the new party. Stakeholders and leaders of the legacy parties began to fight for the control of the APC. The fight is between the Minister of Science and Technology, Dr. Ogbonnaya Onu and Senator Ucha. The leadership tussle has lingered unabated.

While Ucha has absolute control of the party supporters in the state, Onu enjoys the influence of the national leadership of the party. Though revered at the National Secretariat, Onu is seen as
feather-weight in the politics of Ebonyi State. Sources in the party noted that Onu has benefitted in the party for being appointed as a Minister by President Muhammadu Buhari, that appointment was not based on his relevance in the state politics but because of his role during the merger of political parties that metamorphosed into the APC.

According to the source, Onu has not done anything to advance the electoral fortunes of the party in the state. “Worst still is that he failed to deliver his ward, local government to the APC in 2015 and 2019 general elections. What Onu does is to come back on the eve of election and travel out of the state the day after election from his Uburu residence,” an APC member said.

An elder statesman who spoke in confidence described Senator Ucha as the voice of APC in Ebonyi state. He said that Ucha’s influence coupled with the numerical strength of his Ezza clan has made APC, another beautiful bride in the polity. Ucha, he noted has become a beacon of hope for any party he finds himself.

As the Speaker for Ebonyi State House of Assembly, Ucha laid a solid foundation in the legislative arm, which endeared him closely to the then governor, Sam Egwu. Most of the legal framework upon which Ebonyi has been governed since 1999 was provided in Ucha’s time as head of the legislature.

To further display his political sagacity during the 2019 presidential, Ucha and his cronies delivered some wards and local government area for President Muhammadu Buhari in Ebonyi state.

However, Ucha’s effort was said to have been whittled down by the 2019 APC governorship candidate, Senator Sonni Ogbuoji. Under Ogboji’s leadership, the party suffered a huge setback in the general election in Ebonyi state. Ogbuoji allegedly dipped the fortunes of APC in the state. With Ogbuoji bearing its flag, 2019 was adjudged the worst election for the opposition parties in the history of the state. It was alleged that Ogbuoji committed many ‘sins’ that led to the cataclysmic defeat of the party in the state.

The allegations leveled against him include; substitution of candidates, non-conduct of primaries in some zones, non-release and diversion of election support fund, abscondment and sudden appearance on the eve of presidential and governorship elections, disagreement with party
members and others.

Like Onu, Ogbuoji failed to deliver President Buhari in his ward, local government and senatorial zone. However, Onlookers have opined that Ogbuoji merely contested the governorship position not because he would win but to let him appear as a major important personality in the party for other political consideration, especially a possible ministerial appointment.
However, sources in the party have commended Ucha for his dogged fight for the APC in the last general election.

Ogbuoji neither campaigned nor followed the blueprint developed by his campaign council to win election in the state and or deliver President Buhari. The Director General of Ogbuoji campaign Council, Senator Anthony Agbo accused the APC guber candidate for the low
performance of the party in the state.

Agbo said, “After the APC primaries in the state, the names of several persons who won the House of Representatives and state House of Assembly tickets were changed in Abuja. This generated a very volatile and inflammable situation in the party and later gave rise to multiple
litigation.”

“The council made several representations to Ogbuoji and party leadership in the state for the reversal of the damaging action but the appeal was not heeded. Ogbuoji refused to attend a
reconciliation which was attended by key party leaders. The DG and members used their private vehicles all through the period. No single financial request presented by the council to Ogbuoji for the purpose of the campaign, no matter how big or small, was honoured.”

Many thought that APC would utilize its historic victory in the 2015 presidential election to advance the fortune of the party in Ebonyi State. Some leaders in the state chapter of the party were sharply divided in their stance on how the party should be run. The APC crisis in Ebonyi state started shortly after the Mrs. Adeshola Ndu led committee conducted the maiden congresses of the party in the state in 2014, preparatory to the 2015 general election.

There was a rude political re-awakening which started in 2011. From that year, the political consciousness of Ebonyi people changed from wholesale followership of a political party to consideration for individuals, mainly on merit. It brought a time that voters stood firm for their choices. However, instead of consolidating on the strength of the APC, internal leadership crisis took over the new party. Stakeholders and leaders of the legacy parties began to fight for the control of the APC. The fight is between the Minister of Science and Technology, Dr. Ogbonnaya Onu and Senator Ucha. The leadership tussle has lingered unabated