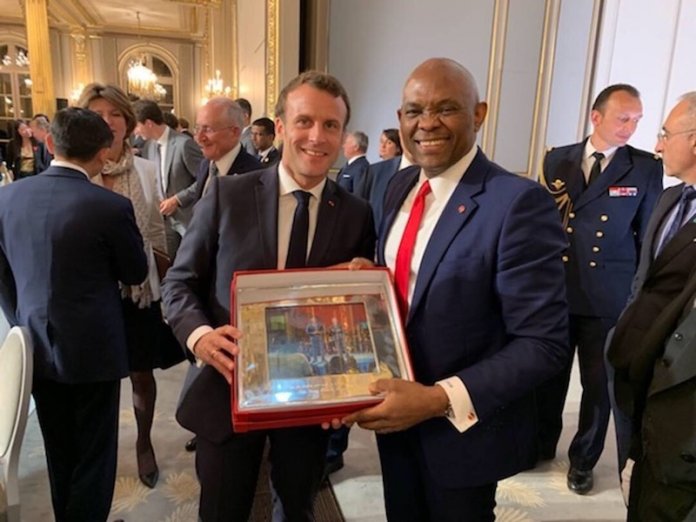 Always passionate about the rise of Africa, Chairman of Heirs Holdings, Tony Elumelu, was recently in France to pitch, as he has done many times, the viability of the continent to some of the world’s deepest pockets. Charles Ajunwa writes

Mr. Tony Elumelu, one of Africa’s greatest investors and entrepreneurs himself, spoke at French President Emmanuel Macron’s flagship initiative, Tech for Good summit, which held at the Elysee Palace in Paris.

The summit aims to encourage global tech leaders to think about how new technologies can contribute to the common good, in areas such as education and health.

World leaders such as Prime Ministers of Canada and Britain, Justin Trudeau and Theresa May, Irish politician, Leo Varadkar and former United States Secretary of State, John Kerry, were also at the summit, which gained commitments from 45 tech giants to double the number of women on their management boards to 30 per cent by 2022.

Elumelu, who is passionate about issues concerning Africa, said he remains “a committed founding member of French President Emmanuel Macron’s flagship initiative, Tech for Good, because it deals directly with two themes very close to my heart – technology and gender equality,” adding “the summit which took place at the Elysee Palace, we retained our attention on technology while also broadening our focus to address diversity and gender inclusion.”

In his speech at the summit, Elumelu acknowledged the power of technology to drive economic transformation and development. “Technology is the leading accelerator for economic transformation and development. From efficient payment systems, to access to data that fosters connection and collaboration — technology is our new reality and it offers a world of opportunity and promise,” he said.

He also noted that Africa cannot be left behind. “Africa needs this type of gathering – we are a continent with over 60 per cent of its people under the age of 30 – they need economic opportunities, they need hope. They need Tech for Good and just as important, Tech for All”, Elumelu said.

Continuing, Elumelu said “I represented the African continent to draw attention to our young ones who seek economic hope and opportunity via technology. Technology is a great employer of labour, technology drives inclusiveness, technology helps to alleviate poverty, but we must not forget that in Africa we are just starting out and we cannot afford to lag behind. We need the world to pay attention to Africa so that young Africans are not disenfranchised and left behind in this new technology era.

“We need the world to pay attention to the plight of young Africans so that issues of migration can be addressed in a more fundamental way – by tackling the root cause which is a lack of economic hope. We must address these issues holistically to fight poverty which as we all know is a threat to everyone everywhere.”

Elumelu challenged the leaders present at the Paris summit to train and invest in young Africans.

“I challenged the world leaders who gathered in Paris today, specially invited by President Macron from the most competitive nations in the world and the most innovative and profitable private sector organisations. I challenged them to train and invest in young Africans, and to make capital investments on the continent that will ensure that tech is truly for all. Tech is for good but we must make sure it is for all. These commitments will make the world a more equitable and inclusive place. I reiterated to them that even as they gathered in the next G7 and G20 summits, they should prioritise tech for all on the African continent,” Elumelu urged the world leaders.

Elumelu’s call for increased investment and focus on Africa is a reflection of his own legacy.

He said: “At the Tony Elumelu Foundation, we have led in committing to Tech for All. Our digital hub for African entrepreneurs, TEFConnect, demonstrates the possibilities that can be unlocked on our continent when we leverage technology in business, investment and social good. Our platform is a demonstration of what can be achieved when the digital revolution is democratised – personal empowerment, business growth, equitable bilateral relationships and a more gender balanced and inclusive society.”

“The private sector must be the core driver of Africa’s economic transformation, but this sector cannot attain its full potential if entrepreneurs are left behind,” Elumelu said in a press statement announcing entries into the 2019 cohort of the programme.

After four years, the entrepreneurship has been so successful that it has attracted the support of other international organisations willing to invest in African entrepreneurs.

Also, Elumelu is the driver of the Africapitalism philosophy, which holds that the private sector, supported by good government reforms and support, has the capacity to transform Africa.

Last year, he was named one of the most influential philanthropists in the world by a UK-based digital platform.

In Paris, Elumelu wasn’t just asking for more investment into Africa. He was also calling for the use of technology to “bridge the gender divide in today’s fast-evolving workspace, drive a more inclusive work environment and accelerate innovations that will further simplify our lives and make us more efficient.

“Why? Because Africa needs to act. According to a report by the Africa CEO Forum, only five per cent of CEOs of major groups in Africa are women. These numbers are staggeringly low – but we are pacemakers and role models.

Elumelu, who co-signed the gender diversity pact aimed at increasing participation of women in leadership and technology by 2022 with other global corporate leaders on behalf of the United Bank for Africa (UBA), said a report by the Africa CEO Forum noted that only five per cent of CEOs of major groups in Africa are women. “These numbers are staggeringly low – but we are pacemakers and role models,” he said.

However, he was quick to point out the gender balance gains made by some of the companies he has major stakes in.

“In our group, we walk the talk – in UBA, we are currently leading in diversity across the 20 African countries we operate in, as well as in the UK, USA and France,” he said.

“31 per cent of senior/executive management positions group-wide are held by women, with nearly 30 per centfemale representation on the boards within the UBA Group – we have female regional CEOs, and some critical functions are female-led – because we appoint on merit – and merit alone. Last September, we announced the appointment of four new directors at UBA, two of which – by no coincidence — were women, bringing the total female representation on our Board to 30 per cent.”

He also noted that similar appointments have been “made at Transcorp Plc, with the appointment of a female CEO for the Hotels and two female Non-Executive directors. At the Tony Elumelu Foundation, we currently have 50 per cent female representation on the board, and a remarkable 100 per centrepresentation in our Senior Management!

“Yet, we remain committed to achieving an even higher representation of women broadly in leadership, including representation on Board and Management Committees within the Group. In our flagship Entrepreneurship Programme, we have seen a dramatic increase in the applications from women-run businesses, from 25 per cent in 2015 to 42 per cent in 2019!

“I thank my good friend, President Macron, for this wonderful opportunity to champion African entrepreneurs, while reconnecting with old friends. It was especially good to touch base again with world leaders including Theresa May of United Kingdom, Justin Trudeau of Canada, and Leo Varadkar of Ireland, and friends including Jack Ma and John Kerry,” he said.