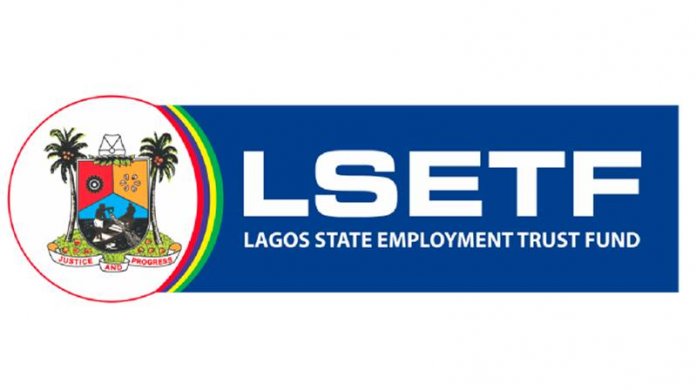 The Lagos State Employment Trust Fund (LSETF) has signed a memorandum of understanding (MoU) with an SME support firm, Mamamoni Limited, to provide mobile loans and vocational skills training to 100 women in Lagos, to enable them grow their businesses.

The move was in line with the LSETF’s access to finance programme which provides funding for micro, small and medium scale enterprises (MSMEs), as well as capacity building to boost their businesses.

The partnership tagged: “Mamamoni Women Empowerment Project,” was signed during the fund’s recent visit to Mamamoni’s newly-opened Innovation Hub at Amuwo Odofin where the skills acquisition will take place.

LSETF in a statement, said under the partnership, it would provide N5 million to train and fund the 100 women to enable them become distributors of Mamamoni’s locally-produced Levantar Liquid Dish Wash, a fast selling consumer good in the local market.

It also explained that the beneficiaries of the initiative would get funding of N50, 000 each with a loan tenure of 12 months, saying to qualify for the loan, the applicant must have gone through the skill acquisition training and certification organised by Mamamoni Limited.

Commenting on the partnership, the Acting Executive Secretary of the LSETF, Teju Abisoye said: “We are pleased to enter into this agreement with Mamamoni as it aligns with our mandate for creating opportunities for Micro-Enterprises to create wealth within the Lagos local economy.

“In targeting women, we connect to the well-researched philosophy that when you empower women, you empower the community.

“We are confident that with the track record of Mamamoni in executing similar interventions, this partnership will help create a new pipeline of successful Micro-Entrepreneurs who will contribute significantly to family and community building, whilst creating jobs for the young ones.”

In her remarks, the Founder and Chief Executive Officer of Mamamoni Limited, Mrs. Nkem Okocha, said: “I am very proud to be collaborating with the LSETF, renowned for their unbiased, open and accessible programmes. We are determined to lift more women from the poverty lines, engineer economic growth and societal development. “This partnership with LSETF allows us the opportunity as a brand to fulfil this objective. This arrangement states that we provide necessary training and visibility for the women and their businesses as well as logistics support to all beneficiaries, while the LSETF will provide access to affordable funding through a loan programme for the start-ups.

“I am very excited at the prospect of this intervention and the opportunities it offers our women to grow themselves and groom others”, Okocha added.

The Nigerian-flagged vessel, MV CHARIS, which was attacked by unknown assailants recently and subsequently rescued by the Spanish Navy and handed over to Equatorial Guinea, has been released the Nigerian Maritime Administration and Safety Agency (NIMASA) disclosed.

The release of the vessel according to  a statement by the agency, was facilitated by the Nigerian Ambassador to Equatorial Guinea, Ambassador Toko Ali Gongulong, with the assistance of the Defence Attaché, Navy Captain Seyi Oladipo, and officials of NIMASA.

According to the agency, “Reports had circulated on certain online news platforms lsst week claiming that Nigerian crewmen were arrested in Malabo, Equatorial Guinea, on suspicion of involvement in piracy activities.

“The Vice President of Equatorial Guinea, Teodoro Nguema Obiang Mangue had also claimed on his country’s on national radio that 10 sea pirates of Nigerian origin were arrested with regard to an attack on a vessel, MV BLUE MARLIN.

“It was on this premise that the Nigerian Ambassador, the Defence Attaché, and officials of NIMASA, in a combined effort, moved to correct the erroneous information and thereafter secure the release of the Nigerian crew. “

It added, “Meanwhile, a clearer light on the details of the incident involving the Nigerian-flagged vessel, MV CHARIS, has now emerged. MV CHARIS is a tugboat, which was on its way to execute a vessel recovery contract in Equatorial Guinean territorial waters, when it was attacked by unknown armed assailants on Sunday, May 5, 2019.”

The vessel, NIMASA added, was commandeered by the attackers and used to attack the much larger Maltese-flagged vessel, MV BLUE MARLIN, around the same area of the initial attack.

“However, in the latter case, the Captain of MV BLUE MARLIN was able to send a distress call, which was responded to by a Spanish Navy vessel.

“It was the intervention of the Spanish Navy that stopped the attack, as the attackers took to their heels at the approach of the naval ship. The fate of some of the assailants is still undetermined.

“Both MV BLUE MARLIN and the MV CHARIS were subsequently handed over to the Equatorial Guinea Navy by the Spanish Navy, as the incident was clearly in their jurisdiction, it narrated.

“At this point, a misunderstanding of the specifics occurred between the arresting authorities because on arrival in Malabo, MV BLUE MARLIN was docked for repairs, with its crew treated decently, while MV CHARIS and its crew were detained by the police under threat of being charged with piracy, whereas they were equally attacked and hijacked by the pirates, “NIMASA stated.