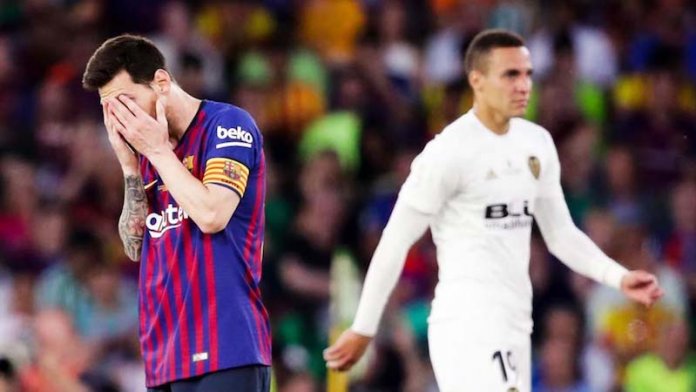 Lionel Messi scored but was powerless to prevent FC Barcelona from losing 2-1 to Valencia in the Copa del Rey final at Estadio Benito Vilamarin yesterday evening.

Valencia started on the front foot and Rodrigo missed an absolute sitter in the fifth minute. Clement Lenglet was caught napping by Kevin Gameiro before the latter played in his strike partner, who left Jasper Cillessen for dead and only had the goal at his mercy but for a goal-line block by Gerard Pique.

Lionel Messi nearly scored in the 18th minute. The forward made his first real contribution of the final, bursting into Los Ches’ penalty area and hitting a low drive that ended up going out for a corner following a desperate block from Gabriel Paulista.

Three minutes later, Valencia drew first blood. The offside flag stayed down as Jose Luis Gaya received a long ball from Francis Coquelin from deep before the left-back sent it low to Gameiro, who made no mistake with an unstoppable finish past Cillessen.

Dani Parejo left his marker for dead in midfield and played a brilliant through ball to the pacy Carlos Soler, who beat Alba for speed before crossing for the grateful Rodrigo to head home from a couple of yards out.

Valencia shot-stopper Jaume Domenech then had to be at his best to keep out Messi on the stroke of half-time as the La Liga champions went in to the break trailing 2-0.

Barca coach Valverde reacted to the two-goal deficit by conducting a double substitution just before the second half, bringing on Malcom for Nelson Semedo and Arturo Vidal for Arthur.

Immediately after the interval, Rodrigo created a chance for himself, but his low shot was too weak and comfortably collected by Cillessen as a result.

Goncalo Guedes then came close in the 49th minute.

The winger played a quick one-two with Rodrigo before unleashing a powerful shot that went just wide of Cillessen’s right-hand post.

Messi hit the post in the 57th minute. Malcom held the ball up for his legendary teammate to break into the Valencia box and hit a looped effort over Domenech only to hit the woodwork and for the ball to bounce clear only as far out as Vidal who scuffed his effort high and wide of goal.

Gerard Pique almost got himself on the scoresheet in the 71st minute. Malcom left Gaya for dead before bursting clear and playing a pinpoint pass towards the centre-back only for his first-time effort to go just wide of Domenech’s left post.

Two minutes later, Barca did pull a goal back courtesy of their talisman Messi. The Argentine playmaker tapped a loose ball into the back of an empty net following Domenech’s save from Lenglet’s header for his 10th goal in five Copa del Rey finals.

But in the end, Valencia held on to their slender one-goal advantage and prevented Barca from claiming a fifth Copa del Rey crown in a row.