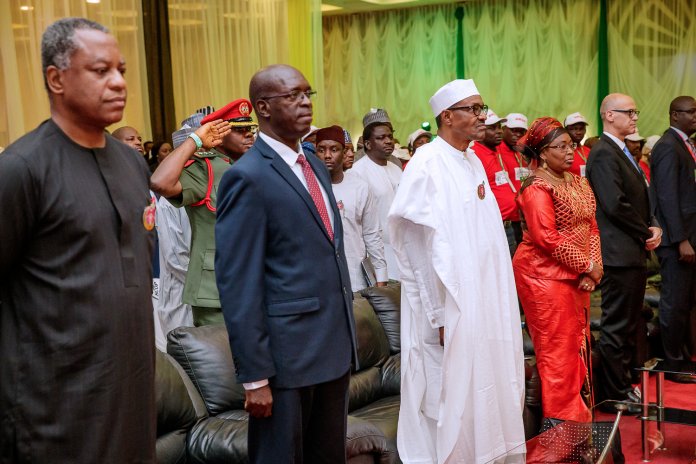 An enabling environment is imperative for an anti-corruption campaign to thrive, writes  Pearl Uzokwe

The World Economic Forum’s (WEF) Partnership Against Corruption Initiative (PACI) held its Bi-Annual Community meeting in Switzerland between the 21-22nd of May. The above topic was discussed by WEF’s Global Shapers who shared their perspectives of the young generation on anti-corruption. I would like to look at this topic,
albeit, from a sub-Saharan African perspective.

Whilst acknowledging that Africa is not one homogenous unit, I have however sought to establish threads that should have applicability across a significant number of sub-Saharan African countries.

The World Bank has defined corruption as the abuse of entrusted power for private gain. It can be classified as grand and petty, depending on the amount of money lost and the sector where it occurs. Corruption cuts across various levels of government and is a major inhibitor of political and economic development and a sustainable future.

Currently, corruption exists on an alarming scale as the Corruption Perception Index (CPI) shows that majority of countries are making little or no progress in ending corruption. The 2017 ranking which ranks 180 countries and territories by their perceived levels of public sector corruption, according to experts and businesspeople, uses a scale of 0 to 100, where 0 is highly corrupt and 100 is very clean. The index found that more than two-thirds of countries score below 50, with an average score of 43.

Globally, 11 out the 20 countries perceived to be most corrupt are in Africa. In Africa, about 90% of the countries struggle with high levels of corruption which is mostly characterized by poor accountability of government officials, corrupt judicial systems which in turn affects the various sectors of a countries economy and the populace as a whole.

A simple observation is that whilst no country earns a perfect score on the CPI, countries on the high performing end are those dedicated to the preservation of the democratic rights of their citizens and also importantly, those countries with a higher per capita income. The inverse is the case at the bottom end of the CPI ranking as expected- the worst performing countries are those for example just emerging from decades-long wars and those with limited regard for the value of their citizens who as such fail to uphold the democratic rights of their citizens.

In speaking about democracy, I will refer to the Freedom House definition which is, countries characterised by free and fair elections; strong and independent institutions; political rights, like the right to protest; civil rights like access to a free trial.
In the last seven years, only 20 countries significantly improved their CPI scores, including three from Africa: Rwanda, Senegal, and Côte D’Ivoire.
Delia Ferreira Rubio, chair of Transparency International has said in recent report that: “Our research makes a clear link between having a healthy democracy and successfully fighting public sector corruption. Corruption is much more likely to flourish where democratic foundations are weak and, as we have seen in many countries, where undemocratic and populist politicians can use it to their advantage.”

Right across the world, populist leadership is gaining momentum. There are clear lessons to be learnt and avoided here in Africa as there is an established link between high corruption rates and increased support for populist leaders. Currently, 40% of populist leaders across the world are also indicted on corruption charges (ref: Tony Blair Institute for Global Change). Many said populist leaders have attained their position sadly by mobilizing the anti-corruption generation. Throughout the world, political leaders who run on a populist platform are gaining power and undermining democracy.
What exactly is an anti-corruption generation? One in which the government, businesses, civil society and everyday people live and conduct their affairs in a manner that is free of corruption.

The generation that it is hoped will produce this corruption-free world majorly consists of the ‘Millennials’ with ages ranging between 18 and34 years or more generally termed as the youth. They are best positioned for achieving this vision because they are just entering the workforce and will begin to assume leadership positions over the next decade. If they do not act, they will live with the consequences of today’s corruption the longest. Today’s generation of youth is the largest ever, and makes up 1.8 billion leaders of tomorrow. Their engagement and ideas are critical to our success for achieving an anti-corruption generation and bringing a fresh take on the status quo.

Whilst acknowledging the potential that the millennials possess in reality, they will be faced with a wide range of challenges on the sub-Saharan African continent where a large percentage of the millennials face difficulties that their contemporaries in more developed nations will never have to contemplate. It is estimated that 62 per cent of people in sub-Saharan Africa are still without access to electricity. This coupled with the absence of the most basic social safety net that guarantees, food, clothing and housing to the youth unduly exposes them to the regime of unscrupulous practices across the continent.

In addition, young people are further exposed to corruption as students, voters, workers and customers. This exposure to corruption occurs in many ways: from demands for bribes to secure admission into learning institutions, get employment, obtain business permits and licenses, to being bribed as voters and receiving cash handouts from politicians to cause violence during elections. It may not be easy to successfully execute the fight against corruption, but it is highly imperative for collaboration on a global development framework to help bolster the cause of empowering this anti-corruption generation.

That said, in the last seven years, 20 countries have significantly improved their CPI scores, including these African countries- Rwanda, Senegal, and Côte d’Ivoire. Rwanda’s lowest score on the index was 121 but in 2018 it was ranked 48 least corrupt nation out of 175 countries. Côte d’Ivoire moved from 27 points in 2013 to 35 points in 2018, while Senegal moved from 36 points in 2012 to 45 points in 2018. There has been a clear intentionality in the drive of the respective leaders to shift the mindset of their nations showing that there remains hope for the continent. This political will coupled with legislative and institutional reforms have been instrumental in these countries and will form the bedrock for a sustained anti-corruption drive.

The existence of an enabling environment is imperative for an anti-corruption campaign to thrive and this is best driven from the top down. In order to win the fight against corruption there is the need for unwavering demand for accountability; mindset shift and re-orientation of the youth to fight for social justice, equity and societal transformation; youth mobilisation for change and linkage with other agents of change in society; and youth advocacy towards achieving institutional changes. A recent example is the Not too Young to Run Bill in Nigeria which became a law that reduced the age requirement for several elective positions. This change was largely galvanized by youth civil society groups.

African youth can promote the anti-corruption cause by deploying social media as a form of modern protest and an advocacy tool, developing corruption reporting web and mobile apps to increase transparency and becoming more involved in the political process.
In spite of the unique challenges faced on the continent our youth can harness technology as a powerful anti-corruption weapon.

Our continent’s battle cannot be left to our leaders or the millennials alone as the price to be paid will simply be too high. Perhaps the best approach to unveiling the anti-corruption generation is to rid the conversation of any allusions as to age, gender, creed and social strata. We will need to broaden the conversation, break down the millennial confines and instead zero in on anti-corruption being a pursuit that should and can be embraced by all on the continent.

–Uzokwe is the Director, Governance and Sustainability, Sahara Group.