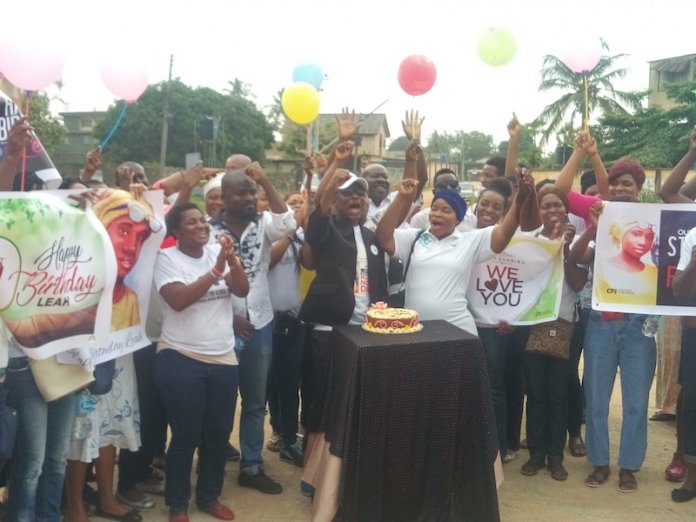 •Ask FG to intensify efforts on her release

Leah was one of the 112 students of Government Girls’ Technical College, Dapchi, Yobe State, who were abducted on February 19, 2018 by the terrorists, who later released the girls, excluding the birthday girl for refusing to renounce her Christian faith.

The CSOs urged President Muhammadu Buhari to do more to secure Sharibu’s release, saying he should see her freedom from captivity as a democracy gift to Nigerians, before he begins his second term in office.

To mark her 16th birthday, the second in captivity, several organisations, which gathered at the Unity Fountain in Abuja, and in other locations across the country, appealed to government to ensure the safe and speedy return of Leah to her family and the Christian community.

The founder, Funmi Para-Mallam Peace Foundation, Rev. Godwin Para-Mallam, who called on Buhari to prioritise security, unemployment, poverty and economy revitalisation in his second term, maintained that these were the drivers of the spate of kidnappings witnessed in the country especially in the North.

He said: “Unless the court says something otherwise, on the 29th of May our President Buhari is going to be sworn in for his second term. Nigerians have gone through a lot; they have endured a lot in the area of security.

“The number one priority as you move into your second term is to address the security challenges particularly in the northern part of Nigeria, the Middle Belt, the North-east, North-west; but of course there are pockets of security challenges in other parts of the country.

“The economy, the poverty, the unemployment; these are very serious issues that in themselves generate other challenges for our nation. It will be helpful if you give attention to that.

“The whole question of religion tolerance is a reality in our nation and of course you need to do more as a father of a nation to unite Nigerians and Nigeria together during your second term and I will ask Mr. President: ‘Will it be possible for you to give Leah Sharibu as a gift to this nation by working and securing her release before you are sworn in as President on 29th of May 2019?
“That is the appeal; that is our heart; and people have cried, Mr. President. Give us a gift, set Leah Sharibu and others who are in captivity free.”

In an emotional speech, the Founder, Mercy Ade-Davies Foundation, Prof. Funmi Adesanya-Davies, called on government to secure the speedy release of Leah from captivity, just the same way it was able to secure the release of a Muslim, who was held in Saudi Arabia for alleged drug peddling.
She said: “Leah was the only girl retained because she is a Christian and refused to denounce her faith. Spite to Leah Sharibu is spite to me; that means I am not safe as a northern Nigerian Christian woman.

“Releasing Leah Sharibu to us is a mark that Christian community in Nigeria is same as Muslim community. We want to ask the government: Are we all not equal, don’t we have the same rights, and are we all not Nigerians?
“Our hearts are broken, we are depressed, we are sad; we are unhappy; release of Leah Sharibu is a sign to this nation and the entire globe that the Christian community is acceptable; but not releasing her is a sign of a very bad omen and this bad omen must be stopped