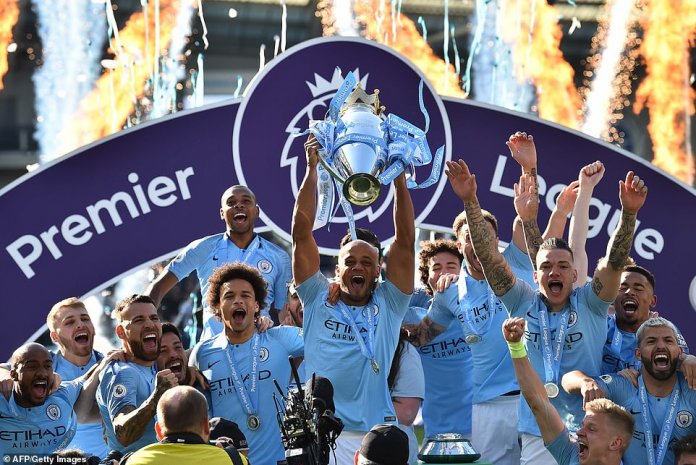 Manchester City retained their Premier League title and finally ended Liverpool’s magnificent challenge after surviving a scare to come from behind and outclass Brighton at the Amex.

Pep Guardiola’s side started the day knowing victory would ensure they would be the first team to retain the crown since Manchester United 10 years ago – but any slip-up could let in their relentless pursuers Liverpool, who were hosting Wolves at Anfield.

And when Glenn Murray gave the Seagulls the lead with a glancing header from a corner after 27 minutes, anxiety rose in Sussex and hopes rose at Anfield that Liverpool might win their first title in 29 years.

Manchester City’s response was instant, emphatic and ruthless as they swept Brighton aside to end the campaign with a record 14 successive league victories, making it 32 in all, which equals the record they set last season.

Sergio Aguero pounced in the area to equalise inside 83 seconds and Aymeric Laporte arrived unmarked on the end of a corner to put City ahead before half-time.

Brighton had no way back and City completed the formalities in spectacular style as Riyad Mahrez fired high past Mat Ryan just after the hour and Ilkay Gundogan’s spectacular 72nd minute free-kick sparked wild celebrations.

City may not have repeated the 100 points that won the title last season but this was arguably an even sweeter success given the season-long battle with Liverpool.

They will now aim to complete a unique domestic treble when they face Watford in the FA Cup Final at Wembley on 18 May.

City knew their task at kick-off here in Sussex – but whether it was a combination of nerves or unwitting complacency, it took the fright of going behind to kick them into action.

City were careless and lacking in urgency until Murray bundled in a near-post header.

It was the signal for the last assault on the title.

Aguero swiftly put the show back on the road and once Laporte escape the attentions of Murray to head home, this was job done.

It was a fitting decoration that the final two goals of City’s season were thunderous efforts from Mahrez and Gundogan, demonstrating the quality that is spread so liberally through this squad.

Brighton, to their credit, did not simply stand aside and allow the party to take place: Chris Hughton’s side were organised and resilient but once they levelled matters up, City were irresistible.

And even the home fans accepted the inevitable by the final whistle, rising to first give a standing ovation to City captain Vincent Kompany when he was substituted and then to Guardiola and his team once referee Michael Oliver had sounded the final whistle that confirmed they were were Premier League champions for the fourth time and for the sixth time in total.

City’s achievement, completed with that astonishing 14-game win towards the winning post, is underscored by the fact they saw saw off a Liverpool side that lost just once this season – to City – and amassed 97 points.

This is a magnificent feat by Guardiola and Manchester City.

The best team always ends as Premier League champions – and no matter how superbly Liverpool have performed, they came up against a truly outstanding team that was just one point better.

Liverpool defender Virgil van Dijk has been named the Premier League Player of the Season following a memorable campaign for the Netherlands international.

Signed for £75 million ($95m) from Southampton in January 2018, Van Dijk has helped revolutionise the Reds’ backline this season as they battled till the final day yesterday for a first league title in 29 years.

The 27-year-old beat off the likes of Raheem Sterling, Eden Hazard and teammates; Mohamed Salah and Sadio Mane to take the prize yesterday after fans’ votes were combined with those of a panel of experts.

Manchester pair Bernardo Silva and Sergio Aguero joined club-mate Sterling on the seven-man shortlist for an award which has previously been won by the likes of Cristiano Ronaldo, Gareth Bale, Wayne Rooney and Thierry Henry.

Van Dijk becomes the second successive Liverpool player to win the prize following Salah’s success in 2017-18 and fourth overall, with Luis Suarez and Michael Owen having also taken home the award during their respective times at Anfield.

It is also the second illustrious gong that the former Celtic centre-back has won in recent times after he was named PFA Player of the Year in the closing weeks of the campaign.

In total, Van Dijk has played in each of Liverpool’s 38 Premier League matches this term, helping them to 20 clean sheets while scoring four goals at the other end of the pitch.

Those performances helped Liverpool to keep the pressure on defending champions Man City at the top of the table heading into the final day of the season yesterday.

Jurgen Klopp’s side hosted Wolverhampton Wanderers on the final day of the campaign after a memorable season that saw them defeated just once in the league and accrued a record-breaking 97 points from their 38 matches.

Liverpool, the five-time European champions could still end the year with silverware having booked their place in the Champions League final.

Klopp will take his squad to Madrid for the Champions League final on June 1 following their remarkable comeback against Barcelona in the semi-finals, with Liverpool winning 4-0 in the second leg following a 3-0 defeat at Camp Nou six days earlier.

They will face first-time finalists and fellow Premier League outfit Tottenham at the Wanda Metripolitano after Mauricio Pochettino’s side pulled off their own come-from-behind win to knock out Ajax in the last four.

Unlike the World Cup where the Golden Boot is decided by assists if a number of scorers are level, the Premier League instead shares it between the players.

This year, three players – Salah, Mane and Aubameyang – all on 22 goals, meaning they will share it between them.

Sergio Aguero finished one goal back on 21 missing out on another gong, and Salah picks up the golden boot award for a second year running despite having what some have considered a less than impressive season.

Aguero could only manage one on the final day while Salah failed to find the net with Mane and Aubameyang both grabbing doubles to draw level at the top of the chart.

But despite missing out on the Golden Boot Aguero was crowned a Premier League champion for the second year in a row and for the fourth time overall. 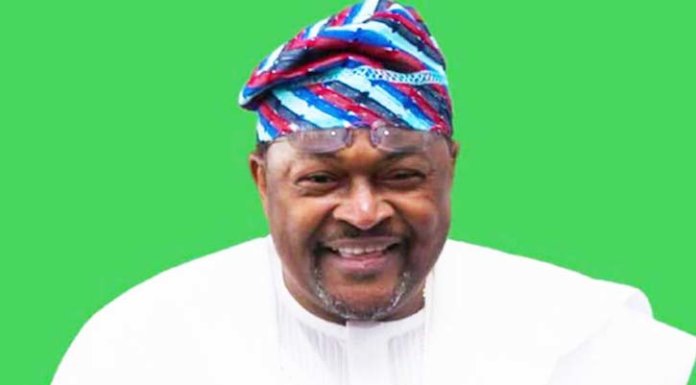