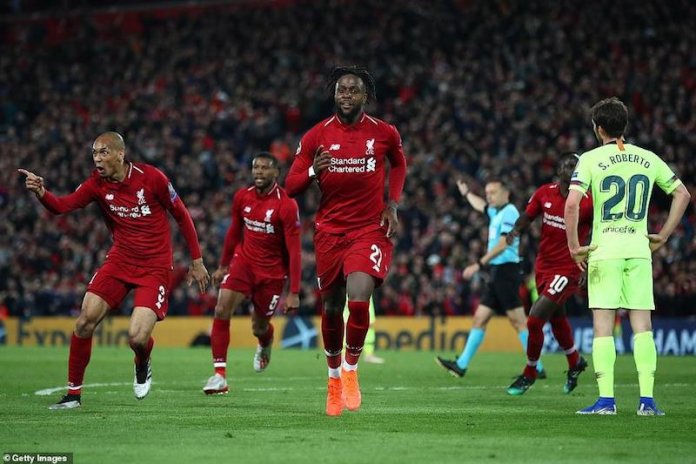 Liverpool last night produced one of the greatest UEFA Champions League comebacks in history by overturning a three-goal first-leg deficit to beat Barcelona 4-3 on aggregate and reach the final.

After Barcelona won the first leg 3-0 at the Camp Nou, few fans gave Liverpool a chance of scoring the goals they needed to progress, let alone preventing the La Liga champions from scoring themselves.

But an early strike from Divock Origi, who tapped in after Marc-Andre ter Stegen failed to hold Jordan Henderson’s shot, gave the vociferous Anfield crowd the belief that another European fight-back from the Reds could be on the cards.

Liverpool pressed against a lacklustre Barcelona, who struggled to get Luis Suarez and Lionel Messi involved, but the visitors managed to keep the deficit to 1-0 at half-time and leave the hosts with seemingly too much to do in the second half.

However, Georginio Wijnaldum, on as a substitute for the injured Andy Robertson, made it 2-0 with a low drive nine minutes after the break before the midfielder almost immediately made it 3-0 on the night and 3-3 on aggregate with a superb header.

And Origi, starting the game because of injuries to Mohamed Salah and Roberto Firmino, completed a remarkable victory for Liverpool when he swept Trent Alexander-Arnold’s low corner into the back of the net late on.

The win means Liverpool are into the Champions League final for a second successive year and they will play either Ajax or Tottenham in Madrid on 1 June.

It was deja vu for Barcelona, who were beaten 3-0 in the second leg of their Champions League quarter-final with Roma last year to exit the competition on the away goals rule, having won the first leg 4-1.

But for Liverpool it was another memorable European comeback that ranks alongside their victory against AC Milan in the 2005 final and their 4-3 win against Borussia Dortmund at Anfield three years ago.