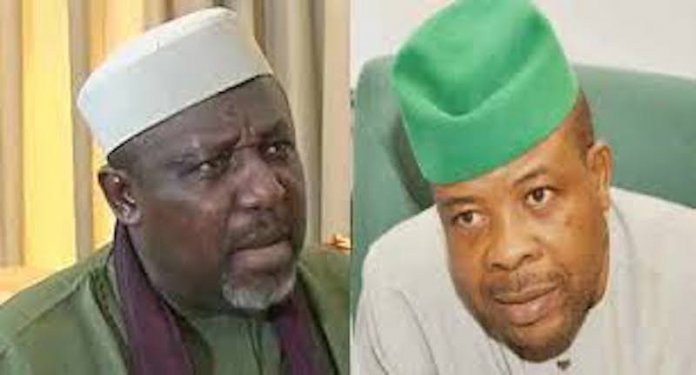 Amby Uneze writes on the accusation of usurpation by the outgoing Governor of Imo State, Chief Rochas Okorocha against his successor, Rt. Hon. Emeka Ihedioha, as well as, the alleged looting of government property by officials of the state

When the legendary Jamaican reggae musician, Winston Hubert Mcintosh popularly known as Peter Tosh released his hit song in the 70s titled “Glass House: If you live in a glasshouse; don’t throw stones. And if you can’t take blows brother, don’t throw blows. Harm no man; let no man harm you. Do unto others; as they would do to you…You build your word on lies and illusions; but you never know that this is the conclusion,” he never knew that a day of recknoning would come to a man called Rochas Okorocha who would have by May 29, 2019 served out his eight-year term as governor of a state in Nigeria.

Okorocha who may be compared to Hilter subjected the people of Imo state to an unbearable reign of terror. For these years, sons and daughters of the state were in exile and whenever a few of them visited home, such persons would return back with woes of horrifying stories what had effectively become Okorocha’s enclave.

The people were helpless. Their lands were confiscated by force and converted to build Okorocha’s family businesses. Peoples’ shops and businesses were destroyed and most of them were sent packing to their various villages and communities to rot away. Some were sent to their untimely graves. Pensioners were dying because their pension and gratuity were denied them; while those who were lucky only received less than 40 percent of their pension. Health and judicial workers were hard-hit as their salaries and allowances were owed for several months. Civil servants were made redundant while their salaries were also not forthcoming. Journalists were banned from covering government activities at government house. In fact, Imo State was completely under siege and bleeding profusely.

The governorship election of March 9, 2019 was what the people of the state needed to breed sigh of relief. They collectively voted for the Peoples Democratic Party (PDP) candidate, Chief Emeka Ihedoha as their governor-elect. Ihedioha who majority of the people have directly or indirectly benefited something from remains the best choice for the people of the state. Ihedioha has impacted positively on the lives of the people through skills acquisition programme he brought as a deputy speaker of the Federal House of Representatives or the federal and state roads he attracted and supervised to completion or the power projects he facilitated, or the employment he created to numerous Imolites.

In addition, Ihedioha as a pro-people and development-oriented legislator had consistently used his position as leader and driver of the budget passage process of the House of Representatives to push for actualization of democracy dividends to his immediate constituency, Imo State and the South-east geo-political zone at large.

These include inter-state and intra city roads, power transmission/injection stations, vocational/training centres, healthcare facilities, schools and sporting facilities. It is noteworthy that in the area of capacity building, Ihedioha had used personal and official contacts to facilitate the aggressive empowerment of several women and youths through skills acquisition, scholarship and trading support.

These achievements made Ihedioha to develop a reputation for competence, a reputation for leadership capacity and a man that can be relied on to deliver on even difficult assignments. He was clearly marked out as a man who could be entrusted with higher responsibilities of State. He epitomizes a rare brand of legislative excellence and is generally seen as a man who would spare no effort to improve the lives and living conditions of the people.

Wikipedia describes him as a leader who placed his constituency at the centre of Nigeria’s political map even as his first duty of representation demanded yet his approach to issues was pan-Nigeria. Ihedioha had throughout this time became the darling brand of not just the people of Imo State but the entire Nigerian masses. He had consistently done his best to place his constituency and Imo State at the centre of Nigeria’s political map.

In his usual characteristics as an intelligent leader, Ihedioha while inaugurating a 139-member of the Transition Technical Committee to draw a road-map for his in-coming administration two weeks ago, he reminded the distinguished members of his readiness to involve all Imolites into his administration, adding that their appointment does not mean that he lacked the capacity to formulate a road map for the incoming government but because he wanted a collective blueprint that would eventually be called ‘our own product’.

“On Wednesday 3rd April, 2019, I had the privilege of inaugurating a Transition Technical Committee, an assemblage of some of our best brains who are individually accomplished in their careers, to help us prepare a road map for governance based on the manifesto and plans we put before our people and feedback we received from our people during rhe campaigns that ensured our victory in the general elections. The unparalleled support and enthusiasm we have received from these eminent Imo sons and daughters have been humbling and indeed challenging. I appreciate the sacrifices they are making as they have since started work in earnest,” he said.

Again, some days later, he set up and inauguated members of the May 29th Inauguration Planning and Handover Committee for a successful inauguration. As an excellent and intelligent administrator who wants the best for the state, Imo people applauded these moves.

According to him, we took a deliberate decision to separate the Transition Technical Committee from the Inauguration Planning and Handover Committee. The reason is that the Transition Technical Committee is very busy with planning a roadmap for governance so that we will hit the ground running from May 29th. We did not want to burden this very important Committee with the task of organising the inauguration activities which is a statutory prerequisite for any new administration.

“The Inauguration Planning and Handover Committee is charged with the responsibility of liaising with the existing government to ensure a smooth handover of power as has been done traditionally in Imo State. We intend to take off with an Interdenominational Church Service, Inaugural Lecture and other sundry activities specifically designed taking into consideration the sorry state of affairs of the State and the need to reflect the realities on the ground in Imo today. We want a somber ceremony devoid of the usual pomp and pageantry heralding a new administration,” the governor-elect stated.

Ordinarily, one would have expected the out-going government to commend the noble idea of the governor-elect to start on a good note, it however, devised a diversionary method to distract the attention of Imolites to frivolities. The out-going government began to condemn the setting up and subsequent inauguration of the two important committees, but it forgot that in April 2011, the same Rochas Okorocha set up and inaugurated transition committee that was saddled with planning his inauguration and handover ceremonies.

In 2007 also the governor-elect as at the time, Chief Ikedi Ohakim, did set up and inaugurate the transition/inauguration committee. It was the road map of that committee that assisted Ohakim in his administration. But Okorocha failed to recognize the need to ask the transition committee of his time to fashion out a road map for his administration, hence he continued to operate an unusual administration without focus, road map and due process. The downfall of his government of familiocracy and imberiberism was largely attributed to disregard to intellectual contributions of technocrats and experienced Imolites who would have contributed positively to his now woeful administration.

Governor Okorocha’s tirade on Ihedioha for allegedly trying to usurp his duties for the very fact that he (Ihedioha and governor-elect) visited the Sam Mbakwe International Cargo Airport that was on fire was also another unintelligent and motor-pack comment. Ihedioha as governor-elect who would take over the mantle of leadership of the state from May 29, is by right the one needed to study the challenges of the state and subsequently plan how to solve them, that is why he is a thorough breed and not an accidental leader.

It is still fresh in the minds of Imolites that Okorocha in April 2011 as soon as he was declared governor-elect immediately punctuated the administration of Ohakim from moving forward. Okorocha wrote to all the banks in the state then to freeze accounts of Imo state government to prevent Ohakim from accessing any fund to pay civil servants and run the administrative expenses of the government as at then.

He went further to whisk away the then Accountant General of the State, Paully Ajoko to further frustrate the government of Ohakim from performing until it handed over to him. As if that was not enough, Okorocha aligned with some House of Assembly members at the time led by Chief Amaechi Nwoha to proceed in impeaching the then Speaker of the House, Chief Goodluck Opiah by a kangaroo arrangement.

Recalling the many atrocities Okorocha committed as governor-elect, it would be proper for Ihedioha to embark on a revenge mission, but considering the different clime and up-bringing of the two gladiators, Ihedioha cannot be equated with Okorocha in terms of milestone and pedigree. Therefore, Okorocha should by now know that if one lives in a glasshouse, he should not throw stones.