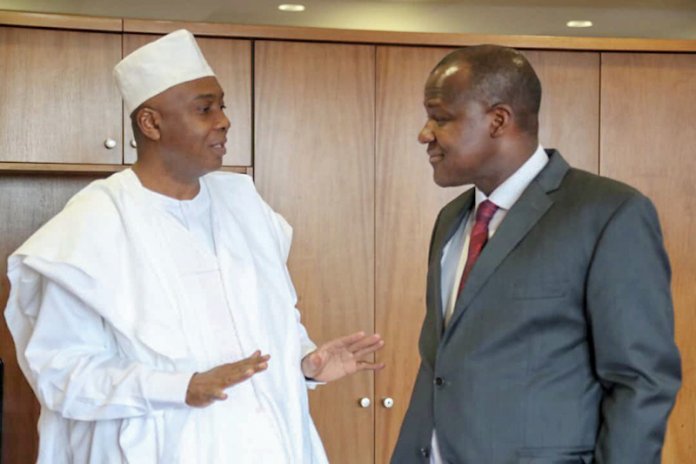 Four Months after the 2019 budget estimate was presented by President Muhammadu Buhari, the National Assembly is yet to pass it, creating needless anxiety in the body polity, write Deji Elumoye and Shola Oyeyipo

Almost four months after President Muhammadu Buhari presented the 2019 Appropriation Bill to the National Assembly, the Senate and the House of Representatives appear to be foot-dragging on the passage of the Bill.

President Buhari had on December 19, presented an N8.83trn budget proposal for the 2019 fiscal year to a joint session of the National Assembly. The budget details include assumptions such as 2.3 million barrels per day oil production and N305 to a dollar exchange rate, real Gross Domestic Product growth rate of 3.01 per cent and inflation rate of 9.98 per cent.

Other projections are total revenue of N6.97trn, which is three per cent lower than the 2018 estimate of N7.17trn. While oil revenue projection was N3.73trn, non-oil revenue estimate was put at N1.39trn and this consists of N799.52bn from company income tax; N229.34 billion from value added tax, and customs duties of N302.5bn.

There is also expectation from recoveries of N203.38bn; N710bn to be earned from the restructuring of government equity in joint ventures, and other sundry incomes of N104.1bn, grants and donor funds of N209.92 billion. Government projected a decrease in budget deficit to N1.86 trillion or 1.3 per cent of the GDP in 2019 from N1.95trn projected for 2018.

While the House of Representatives commenced debate on the budget in January which culminated in the bill passing through second reading, it took the Senate up to three months in March before subjecting it to debate and also passed the second reading stage.

However, the two chambers, last week, passed the 2019-2021 Medium Term Expenditure Framework (MTEF) and Fiscal Strategy Paper (FSP) which will from this fiscal year, form the basis for the preparation of the annual budget.

Last Tuesday, the Senate approved the 2019-2021 Medium Term Expenditure Framework and Fiscal Strategy Paper (FSP) of the Federal Government, six months after it was sent to it by President Muhammadu Buhari in November, 2018.

The approval of the MTEF and FSP by the Senate was sequel to the presentation of the 18-page report of the Committee on Finance by the Chairman, Senator John Enoh (Cross River Central), which considered the President’s request.

While adopting N1.64 Trillion as the amount for New Borrowing to fund the budget deficit, the Senate however advised relevant government agencies “to continue exploring ways of generating additional revenues for government to bring down the fiscal deficit”.

The MTEF/FSP, a three-year rolling expenditure plan, spells out the medium-term expenditure priorities and provides the basis for the preparation of the annual national budget.

The Senate retained the oil output of 2.3 million barrel per day, oil price benchmark of $60 per barrel, an exchange rate of N305/$1, GDP Growth rate of 3.0percent and Inflation growth rate of 9.98percent.

Last Wednesday, the House of Representatives at plenary also approved the 2019-2021 MTEF/FSP proposal of the federal government. The House passed the MTEF and FSP with the projections approved as presented by the executive.

The lawmakers in the green chamber unanimously adopted the report presented by the Hon. Babangida Ibrahim-led joint House Committee on Finance, Appropriations; Aids, Loans and Debt Management; Legislative Budget and Research; and National Planning and Economic Development, which considered the MTEF.

On crude oil production, the lawmakers were of the views that the target could achieved if efforts to curtail vandalism of oil facilities were sustained. They however urged that the Central Bank of Nigeria (CBN) must be supported to evolve modalities to strengthen the naira and bridge the gap between the official and parallel market rates. Relevant agencies were implored to come up with alternative ways of generating additional revenues for government so as to bring down fiscal deficit.

Part of the committee report read: “Also, the Federal Government should harness the full optimal potential of the Federal Ministry of Mines and Steel Development in terms of revenue generation to minimise the level of new borrowing.

“The federal government should consider reducing the granting of waivers and exemptions, while ensuring that the Nigeria Customs Service personnel are at all oil terminals for accountability, and the Federal Inland Revenue Service should consider increasing tax on luxury goods and services.

The House members, however, noted some important areas of concern. For instance, Hon. Betty Apiafi was not favourably disposed to how the federal government goes about the management of debts and deficits. She was particularly concerned that government already has plans for new borrowings in 2019, when the debt profile of the country cannot still be ascertained.

She queried how loans were spent as regards how much is expected to go to capital projects and expressed disdain over alleged non-transparency in the payment of subsidy on petroleum products.

Giving clarification on the issue of borrowing and application, Speaker Yakubu Dogara, pointed out that the Fiscal Responsibility Act only allowed borrowing for capital expenditure. But Hon. Tajudeen Yusuf maintained that every Nigerian, including the lawmakers, must be abreast of how much were spent on capital expenditure in borrowed funds, because in his views, while debt profile has maintained a consistent progression, capital component of the country’s budget was always less than the recurrent expenditure.

On his part, Hon. Ogene Egoh, was concerned about the fact that the exchange rate has remained stagnant over the years, but the committee Chairman, Hon. Ibrahim noted that the committee also noticed that. He assured Nigerians that the executive would be made to shed more light on the matter in the 9th assembly.

Adding his voice to the debate, Hon. Kingsley Chinda, who said there was need to reduce waiver granting, said it was important to know the value of the waivers already granted and why it must be reduced.

He faulted the federal government’s directive to the Federal Inland Revenue Service (FIRS) to introduce new taxes and raise some of the existing ones, this, according to him, “is like ceding the power on taxation to the service.”

While the issue of the 2019 budget cropped up for debate on the floor of the Senate last week, it was not mentioned at the House.

The Senate had on Tuesday directed its Appropriations Committee headed by Senator Danjuma Goje (Gombe Central) to submit the 2019 budget report by Thursday. Senate President, Dr. Bukola Saraki, gave the directive after the submission of the Vice Chairman of the Appropriations Committee, Senator Sunny Ogbuoji (Ebonyi South), who disclosed that only 24 out of 61 sub-committees had submitted their reports as at last Tuesday.

The April 16 deadline set for the passage of the budget by the Senate also appears unrealistic since the budget report is yet to be laid.

As it is now, it is not certain if both the Senate and the House will pass the 2019 Appropriation Bill before the National Assembly goes on Easter vacation on Wednesday. It is however expected that the leadership of the two chambers would ensure that the budget is passed before the end of April so as to give the President enough time to study it before giving his assent in line with constitutional provisions.