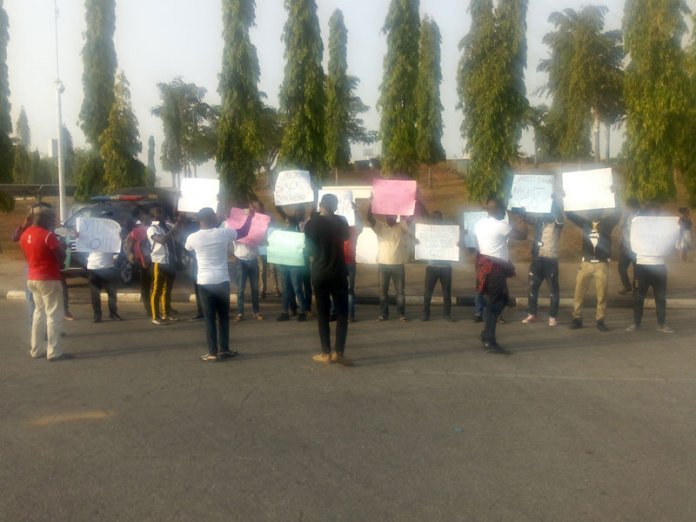 Judiciary workers in Kogi State yesterday protested against the alleged plot by the state government to remove the state Chief Judge, Justice Nasiru Ajanah, from office.

According to the source, the Speaker was also instructed by the governor to mobilised his members yesterday on how to remove the Chief Judge from office on Tuesday.

Meanwhile, the state Chairman of the Judiciary Staff Union of Nigeria, Emmanuel Waniko, has called on the Speaker, Kolawole, against the plot to illegally and forcefully removed the Chief Judge.

The judiciary workers, who protested at the front gate of the Magistrate Court, carried various placards with inscriptions such as ‘Why are you punishing us’; ‘Pay us our salary’; ‘Bello you benefited from the judiciary, why are you fighting us?’ among others.

The chairman noted that the union was forced to make the call at “this auspicious time following the reports reaching them on the clandestine moves by the governor and his directive to the Speaker to disobey the subsisting order given on December 13, 2018, by the High Court of Kogi State, Koton-Karfe division, asking the state assembly to stay action on the ongoing impasse between the executive and judiciary arms of state.

According to him, “We were last paid in June 2018 which makes it a total of nine months today that we are being owed our legitimate salaries. We are therefore upbeat that even after almost four months that our courts are shut down because of our ongoing strike, the state assembly would make itself available to further foster another crisis on the state through this proposed illegal removal of the Chief Judge.”The union opined that the executive arm of the state must be told that JUSUN is resolute in their effort to right the wrongs been perpetuated in the state by Governor Bello.

He called on the state assembly to steer clear of this crisis, rather, it should use its constitutional authority to bring sanity to the state by calling the governor to order.

He said: “Any attempt to bring the hallowed chambers of the state judiciary into disrepute through this glaring and obvious miss governance in the state by illegally pronouncing the removal of the Chief Judge would be stoutly resisted.

“We will also use this opportunity to encourage our members and urge our judiciary officers not to fall for the antics of the clear underperforming administration of Bello.

“We are aware that he has been shopping for any judge that will compromise and betray the judiciary, but we have confidence in your integrity which has stood Kogi State judiciary out among other states in the country.

Also speaking on the plot, a senior legal practitioner name withheld said: “It is unlawful for the state assembly to embark on such a wasteful venture, more so that there is a subsisting order of the High Court restraining the assembly and the governor from doing anything pertaining to the subject matter.

“There is a decision of the Supreme Court in the case of Elelu Habib vs Attorney General of the Federation where the court stated as follows: ‘It is not difficult to see that for the effective exercise of the powers of removal of a Chief Judge of a state by the governor and the House of Assembly, the first port of call by the governor on his journey to removing a Chief Judge of the state shall be the National Judicial Council (NJC) which is equipped with the personnel and resources to investigate the inability of the Chief Judge to discharge the functions of his office to subject of disciplinary action for removal through the committee of the council’.

“This is an illegality that is bound to put the state in bad light, and could result to dire consequences for the House of Assembly in view of the court order they’ve been called upon to flout.”