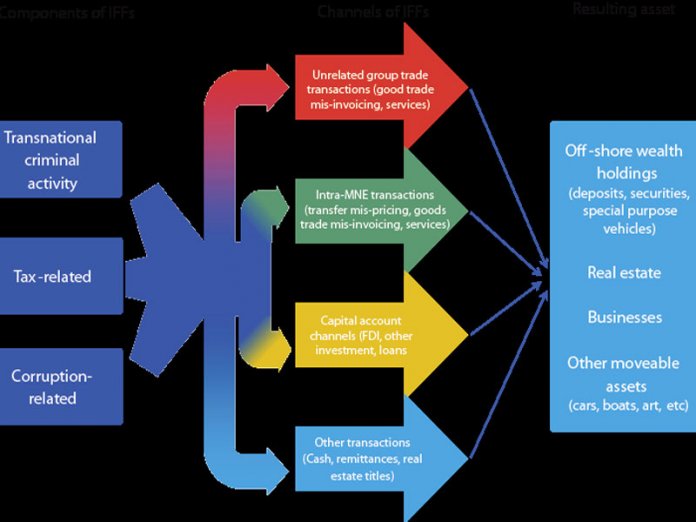 Its importance in the global agenda is reflected by its mention in the Sustainable Development Goals (SDGs) document as a challenge that must be addressed.

That was why at a one-day stakeholders’ engagement event with the theme: ‘Towards Curbing Illicit Flow in the Extractive Sector in Nigeria’ organised by the Civil Society Legislative Advocacy Centre (CISLAC), under the Conflict and Fragility (C&F) Theory of Change Under the OXFAM’s Global Strategic Partnership, the discussion took a new dimension as stakeholders proffered solutions on way forward.

The Programme Manager, Environment and Conservation of Nature, CISLAC, Kolawole Banwo, while speaking at the forum, said illicit financial flow results to revenue loss to the country.

Banwo, said illicit financial flow affects government’s ability to fund development because monies that should have been put together into the budget are fretted away through illegitimate means.
He also noted that the campaign is aimed at making sure that stakeholders are able to develop the framework to ensure that resources are available for national development, while government on their part has a duty to take action.

He explained that civil society organisations (CSOs) have a duty to take advocacy and do research, and make recommendations for the government on what can be done and advocate to specific agencies of government specific steps they should take.

The CISLAC, Programme Manager, further noted that the extractive sector is a very peculiar industry because it is dominated by foreign capital and foreign technology, adding that there are foreign companies’ which have subsidiaries, “and one of the ways that illicit financial fraud takes place is when foreign companies trade with their subsidiaries.”

Banwo, noted that the foreign companies engage in dealings and inflict its cost, saying when such occur, it reduces the foreign companies’ profit margin and reduce the tax the companies are to pay because tax is paid, “meanwhile they are transferring the monies to themselves because the subsidiary is a part of the mother company so it leaves the country and the nation loses.”

He added that during importation, importers inflict the cost of importation, and reduce certain charges to ensure that less tax is paid, stating that there are illegalities in the such as oil bunkering, and oil theft, “all of these are illicit flow leaving the country.”

According to Banwo, “Curbing illicit financial flows require a multi stakeholder approach. It is only possible through the combination of multiple approaches that include policy, laws, and administrative tools.

“It will demand inter-agency collaboration, enforcement of laws and sanctions and capacity and economic initiatives that will prevent, detect and recover revenues lost due to IFF. It involved short, medium and long term strategies.

“There is need for establishment of beneficial ownership information/registry publicly available (CAC/NEITI/DPR/MCO. There is also need for implementation of Automatic Information Exchange (NFIU/FIRS/DPR/NCS and Country-by-Country reporting , (FIRS/DPR/NNPC ).”

From the event it was learnt that Oxfam International has been playing a role in the campaign and it is tired to the global strategic partnership programme under the conflict and strategy change theory.

Oxfam’s Role
A representative of Oxfam who pleaded anonymity noted that as an International Non-Governmental Organisation (INGO), Oxfam’s role is to coordinate platform and stakeholders to galvanize their interest in terms of how Oxfam can block revenues linkages within the country.

The representative also noted that if the revenue linkages are blocked, it would allow government get the monies and use it for development purposes.

The representative added: “We also want to see an era where communities will have a voice in the entire process, what project should go into budget for instance and what type of needs they have at community level.

“We want to get to that level where communities are able to engage with policy holders in terms of the type of policies that should benefit them directly and the indicators that should tell if those policies are being implemented or not and in terms of how it affects the people directly.
“We want to see that point where the linkages from our shores are reduced to the barest minimum, not as it is right now in order to bring in a better governance process within our system.”

The report also noted that the most dominant one, however, is oil and gas, adding that it accounts for 9.6 percent of the country’s Gross Domestic Product (GDP) while solid minerals contributes less than 1percent according to figures released by the Central Bank of Nigeria (CBN) in the first quarter of 2018.

NEITI in the report stated that the Central Bank of Nigeria (CBN) in its annual report of 2017, oil and gas accounted for 56.2 percent of total federally collected revenue.

It added that the National Bureau of Statistics (NBS) report on foreign trade stated that crude oil exports contributed 83.17 percent of total exports in Nigeria during Q3, 2017, “the contribution by the solid minerals industry to both revenue and export is less than 1 percent.”
According to the report: “The civil society advocacy has been recognized globally as a way to combat corruption and illicit financial flows. Therefore, it is no doubt that involvement of civil society organisations in Nigeria will help reduce the vulnerabilities that create IFFs opportunities within the extractive industry.

A network of civil society organisations with particular focus on anti-corruption and financial crimes should be established. Periodic workshops on ‘IFFs in extractive industry in Nigeria’ should be organised to build capacity of civil society within this network. In addition, collaboration with civil society will help create public awareness and this can proffer robust strategies to fight IFFs in the industry.

“To this end, this study invites extractive industry governance institutions to come up with ABC policy frameworks that can be implemented to eradicate IFFs within the industry. This will involve design and implementation of strategies to combat corruption and IFFs originated from the operation of extractive industry. These agencies can setup Anti-Bribery and Corruption Desk (ABCD) within oil and gas and Solid Minerals sectors across Nigeria to help track incidence of IFFs in industry going forward.

“Templates can be developed to report incidence of IFFs and the Anti-Bribery and Corruption Desk officers can be appointed to submit periodic incidence report to the existing Inter-Agency Task Team (IATT) and the NFIU. The reporting regime of IFFs within the extractive industry will exposed the illicit enrichment of politically exposed persons that are abusing public offices at the expense of national development.

“The final stage, which is the third face, will test the mechanisms to combat IFFs in the industry and deploy solution to mitigate threats. It is no doubt that the extractive industry in Nigeria lacks a robust data management framework to help fight associated risks and threats of the IFFs.

In his remarks, the Special Assistant to the Registrar-General Compliance, Corporate Affairs Commission (CAC), Mr. Garba Abubakar, noted that the CAC has an institutional mandate to identify and register legal ownership.

He also noted that the commission has widened the scope of the definition of legal ownership of companies to include beneficial ownership (BO) following Nigeria’s commitments to EITI and OGP initiative and in line with global standards.

Abubakar explained that there are no obligations under the current CAMA to disclose beneficial ownership of shares, adding that government policy in Nigeria expressly mandates the disclosure of the beneficial/real owners of companies.

He added that the CAMA is however presently undergoing review to this end and there are hopes to achieve Presidential assent before May 29 2019.

“The commission is presently working on the technological aspect of the publicly accessible electronic register. The above cannot however address the corruption issues alone. There is a need to track where the money goes.

“Also, Nigeria has an inadequate reward system that is not commensurate with job demands. This has the resultant effect of making the most competent civil/public servants prone to temptation. Conversations around this are pertinent.

“It is mandatory for every company to be registered with the CAC. Waivers only exist for companies on invitation by the government for specialized activities on a temporary basis. Any companies outside this bracket must be registered and non-compliance is a crime punishable by law.”