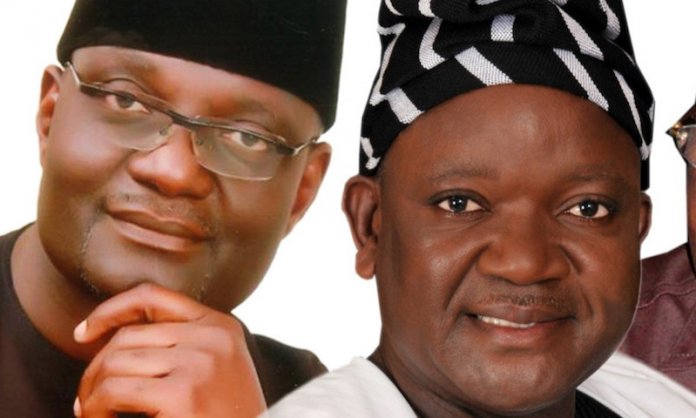 During the 2015 primaries of the All Progressives Congress (APC) in Benue State, Barrister Emmanuel Jime, then aspiring for the governorship ticket of the APC was coasting home to victory, when the process was truncated following a court injunction instituted by some of the aspirants in the race stopping the primary.

This led to one issue or another and eventually, Governor Samuel Ortom, who was in the People Democratic Party (PDP), was invited by some APC bigwigs and handed him the ticket, supposedly under a consensus arrangement.

Fast track to 2019; Jime yet again sought the APC ticket after Ortom left the party, having been shown the way out by the leader of the APC in the state, Senator George Akume. Fortunately, this time, Jime got the ticket and worked towards actualising his plan to govern the state.

With the backing of top notch party members in the state and the Presidency, he went round preaching the change mantra while promising to return the state to prosperity with his planned intervention in Agriculture, healthcare services, education, rural and urban development. He also promised to clear all outstanding arrears of salaries owed workers by the incumbent.

In the past, Benue State had always gone with the party that controlled the center. In 2015, when the APC candidate won the presidential election, there was mass defection by members of the PDP in the state with the reason that Benue could not afford to be in the opposition. However, in 2019, despite Buhari’s victory at the center, cases of defection to the APC was minimal.

According to a pundit, Barrister Ejimbi Oloja, the reasons for this is clear. He said the electorate probably sympathised and aligned with the incumbent governor as a reward for his stand for the Benue people over the Fulani herdsmen invasion of the state.
The governor had stood firm in his stand that herdsmen could only operate their grazing business through the ranching system – a development many analyst believed was against the presidency’s view.

The herdsmen, who were not prepared for such, resisted the anti-open grazing law, which was established by the Benue State government and this led to several deaths of innocent indigenes of the state.
Ortom’s media handlers in the run up to the election continued to hammer the message to the electorate that Ortom was a better candidate who would defend the people whenever crises arises. He also promised that if given the mandate for a second term, he’d ensure that the backlog of salaries and pension would be paid.

With Jime’s advantage of having the backing of Buhari going against the PDP near cleanup of the Senatorial and House of Representatives seats (PDP won two out of the three senatorial seats and seven out of eleven Federal house seats), pundits predicted a neck and neck contest between the two.
However, this was not to be as the PDP machinery became too strong for the opposition APC to contend with. It was obvious that the electorate heard the message of the incumbent than that of his rival, Jime.

Again, like the proverbial cat with nine lives, Jime has been given another opportunity to push for the number one seat in the state. This time around, his opportunity came from the desk of the Independent National Electoral Commission (INEC), which declared the March 9, governorship contest inconclusive, following the number of cancelled votes being higher than Governor Ortom’s margin of lead.

Ortom scored the highest valid votes of 410,576 in 12 Local government areas, followed by Jime with 329,022.
Benue State Returning Officer, Prof. Sebastien Maimako, who announced the result, at the INEC headquarters in Makurdi, said the commission would reschedule a date to conduct a supplementary elections in all the areas election were cancelled.
Professor Maimako noted that the governorship election became inconclusive due to the fact that the total number of voters in areas where election was not held was more than the margin of lead. He further said given the 81,554 margin of lead and the total number of cancelled votes which stood at 121,019, the election could not be declared as conclusive.

“I, Professor Sebastien Maimako, by the power conferred on me as state returning officer for the governorship election, hereby declare that the governorship is inconclusive and supplementary elections will be conducted in a date that would be announced later by INEC.”
The total number of registered voters was put at 2,480,131, while accredited voters were 816,969. The valid votes were put at 790,102, while rejected votes were 14,460 and total number of votes cast was 804,662.

In the breakdown, APC won in Ado, Oju, Obi, Ohimini, Tarka, Katsina-Ala, Makurdi, Apa, Otukpo, Ogbadibo and Okpokwu LGAs, while PDP won in GwerWest, GwerEast, Ushongo, Agatu, Logo, Guma, Gboko, Buruku, Ukum, Kwande, Vandeikya and Konshisha LGAs respectively
With 121,019 cancelled votes now available to be contested within 21 days and with Ortom leading by 81,554 votes, it’s obviously a herculean task for Jime and his party but not impossible to get victory.

Reacting to the decision by INEC, Ortom said his victory could only be delayed and expressed confidence that he would win the elections whenever it is conducted as all the places, where the exercise could not hold or results were cancelled were the PDP’s stronghold.
The governor however called for adequate security during the supplementary polls, stressing that elections were not earlier conducted in those areas due to violence allegedly unleashed in the places by the opposition party.
Ortom added that it was glaring that his winning margin cannot be taken away, saying “There is no need to worry about anything because I’m good to go,”

In his reaction, Jime said he submit to the decision by INEC and present himself for the rerun election. He extended his gratitude to the electorate, party faithful and supporters, who trooped out in their numbers to vote for the APC.
“As a law abiding party, we recognise the decision by INEC as legally binding. We remain upbeat and urge our supporters to stay calm and optimistic ahead of a rerun date. We will do the work required to clinch victory and earn the mandate of Benue people”