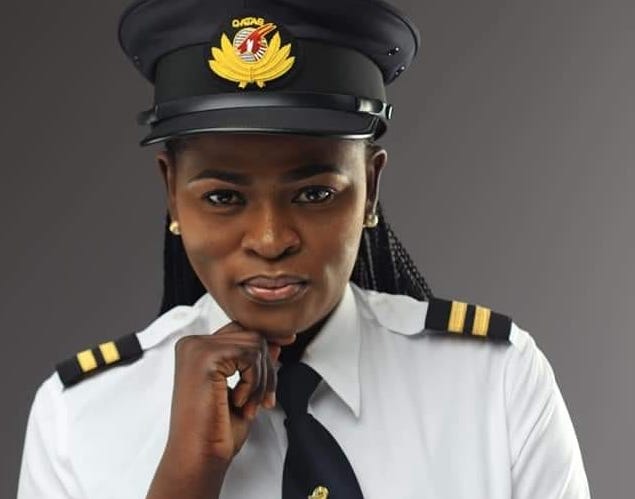 The place of the female pilot in African socio-political context is subjective. One account has Asli Hassan Abade of Somali as the first female African pilot, trained in the 1970s and her first solo flight in 1976. Another account credited Ghanaian Millicent Melody Danquah as the first female pilot after she flew solo for the first time in a de Havilland Canada DHC-1 Chipmunk aircraft in 1964.

Quite few other versions abound, but that of Danquah has been severally repeated, making her more prominent as the authentic first female African aviator. From Nigeria, Chinyere Kalu was recorded the first Nigerian female commercial pilot in 1978, thereby making her part of the first wave of African female pilots but not the first female pilot in Africa.

For African women, history shows that it took a very long time for them to enjoy basic human rights. Through the fight for equality and provision of human rights and privileges to women in society, they have proven that they are a force to reckon with and a setback is no reason not to rise as fast they can. They have also proven that they are capable of achieving incredible feats across many industries.

In recent times, African women are leading and dominating the spaces they find themselves but only a few are making waves in male-dominated industries. Many trailblazers have accomplished in the field of sports, business, and medicine and so on. Now, a Nigerian trailblazer, Adeola Ogunmola Sowemimo has emerged in the aviation industry.

An indigene of Ogbomosho, Oyo State, Sowemimo, the Nigerian pilot is married with kids; a true inspiration for Nigerian women to pursue their dreams despite having a family. It may be tough but the rewards can be truly fulfilling. The graduate of Ladoke Akintola University in the ancient town of Ogbomosho is married to Seunfunmi Olamilekan Sowemimo.

Captain Mutungi was only 17 when she etched her name in Kenyan history as the first female pilot in 1993. Twenty-one years later, the determined woman once again left her mark in history as the first female pilot in Africa to be certified as a Captain of the Boeing 787 “Dreamliner” aircraft. Koki ventured into an occupation that was dominated by men at a time when women in Kenya and Africa were discouraged from venturing into science and engineering.

For Captain Aluenge, she defied all odds by becoming a pilot in the airline industry after living as a refugee in Kenya during the ethnic and political conflict of South Sudan. She holds the distinction of being the first female South Sudanese pilot working for Ethiopian Airlines and Fly Dubai. Aluel Bol made history in 2011. She had worked at Ethiopian Airlines and Fly Dubai before joining Delta Airline.

Like Abade, Danquah and Kalu, cited earlier, a wave of positive acknowledgement, praise and congratulatory messages have continued to trail the announcement of Sowemimo. She had taken to her Facebook page to thank God for his mercy. She wrote: “It is the Lord’s doing and it’s marvelous in my sight.” Caught in the euphoria of her moment, the Orlando, Florida-based pilot further posted a picture of herself as a student of Sunrise Aviation Academy, US on Facebook with the caption “Days of little beginning… God be praised #ihavedominion”.

The picture taken years back shows her (with some co-pilots from Africa, Europe, and the Middle East) in a classroom. A short note attached to the throwback photo reads: “Sunrise Aviation’s January 2011 Private Pilot ground school class. Students are from Nigeria, India, Saudi Arabia, Bahamas, Tunisia, UAE and Turkey. Interest in pilot training at Sunrise Aviation from students around the world has been increasing! Mel Quinton, one of Sunrise’s most experienced instructors, is the ground instructor (out of the picture).”

On seeing her post, friends and family members on the platform also celebrated her for the great achievement, thanking God for granting her the abilities to achieve it. Other well-meaning Nigerians also followed suit on social media to heap praises on her for the stunning milestone.

Even though the Middle East is home to some of the world’s biggest and most recognisable airlines like Emirates and Etihad, it’s reputed as an extremely challenging region for women hoping to get into the cockpit. The state-owned national carrier of Qatar is one of the first in the region to introduce female pilots with women accounting for 44 per cent of the airline’s workforce as at 2018, according to its Chief Executive Officer Akbar Al Baker.