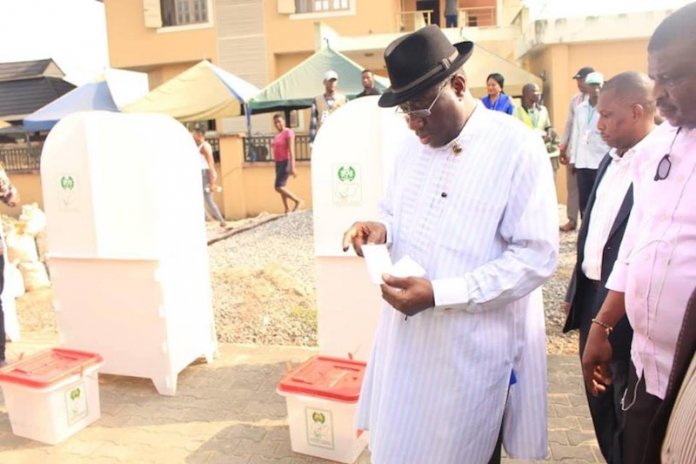 In spite of massive cases of malfunctioning card readers, voting went on smoothly in several areas of Bayelsa on Saturday.

Several of the leaders of the two main political parties in the state, namely the Peoples Democratic Party (PDP) and the All Progressives Congress (APC), described the polls as peaceful, but admitted that the elections could be improved upon.

Former President Goodluck Jonathan, who voted in his unit 039, Olazi Playground, described the process as peaceful in his area.

He urged the Independent National Electoral Commission (INEC) to improve upon the environment in which ad hoc staff are deployed, vowing that all his votes were going to his party, the PDP, across board.

The Bayelsa State Commissioner for Information, Mr Daniel Iworiso-Markson, who voted at Opume, his village, said aside some card readers that declined to authenticate some voters, it was largely peaceful.

In Odi, KOLGA, two APC chieftains, Mr Preye Aganaba and Warman Ogoriba, told journalists that the election was going on well, despite a few hitches.

At the Igbainwari Jetty ward 7, Unit 14 polling unit of Opokuma East, where the former Managing Director of the Niger Delta Development Commission (NDDC), Chief Timi Alaibe voted, there were cases of card reader malfunction and some rowdiness due to delayed voting.

Alaibe said though he was disappointed with the delay in voting, the turnout was encouraging.

At Sampou community of Kolokuma/Opokuma Local Government Area of the state, where Douye Diri, the member representing Yenagoa/Kolokuma/Opokuma Federal Constituency and Central Senatorial candidate of the PDP, voted.

Diri commended INEC for the peaceful conduct and cautioned voters in the state against violent conduct at polling units.

In Agudama-Epetiama in Yenagoa Local Government Area, the conduct of the election was peaceful despite the late arrival of materials and malfunctioning of card readers.

The Bayelsa Commissioner for Youth Development, Udengs Eradiri, a former Ijaw Youth Council President, who voted in Unit 5, ward 10, said the peaceful conduct of the election was as a result of collaboration among stakeholders in the area.