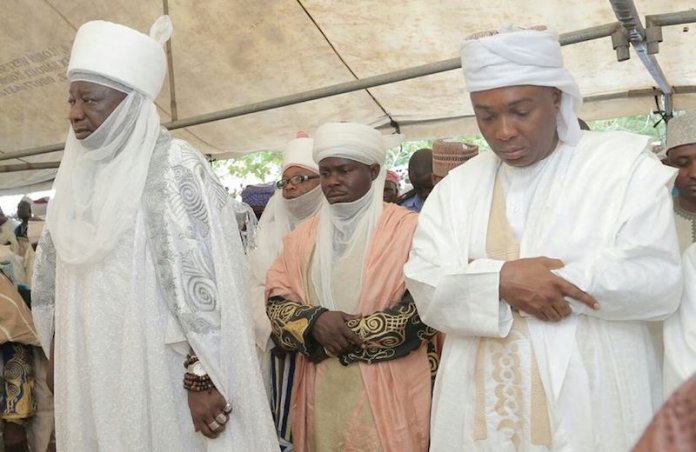 The quest for power shift by Kwara North is the issue in next month’s governorship election, writes Hammed Shittu

The agitation by the people of Kwara North senatorial district of Kwara State is hinged on the fact that they have never produced a governor in the state since the return of Democracy in 1999. But the zone has continued to produce the deputy governor of the state, which the people claimed has not been fair to them since they are also part of the state.
For them, what is sauce for the goose is sauce for the gander since the two other senatorial districts in the state – Kwara central and Kwara south – had taken their respective slots in the leadership control of the state.

According to them, the late former governor of the state, Alhaji Muhammed Lawal, hailed from Kwara central and ruled for four years, while Senate President Bukola Saraki, also from central, ruled for another eight years before the outgoing governor, Alhaji Abdulfatah Ahmed, who hails from Kwara south took over and is about to complete his eight years in office.
Given this political reality, the people of Kwara north, prior to the commencement of electioneering for the 2019 elections in the state, had started agitating for the need for the political stakeholders especially, the political parties to ensure that someone from the zone is considered for pick as their governorship candidate.

Some people from the zone, comprising majorly youths, elders, women, royal fathers, last year at a forum, insisted that any political party that failed to pick its governorship candidate from Kwara north would not be supported by the zone.
But despite their threats, all the parties failed to pick their governorship candidates from the zone, a situation that has continued to generate serious concern, on who will emerge the next governor of the state.

For instance, the two main political parties in the state, APC and PDP, picked their candidates from the Central. While the APC picked Alhaji Abdulrahman Abdulrasaq from Ilorin, which falls within the senatorial district, the PDP also picked Hon. Razak Atunwa from the same Ilorin. And soon, other parties in the state followed suit by picking their governorship candidates from central.
Although the people of the Kwara north have remained committed to their course on the power shift, political pundits believe that, the continue picking of candidates from central especially, by the two leading parties was based on the strength of higher votes in Central as whoever will emerge victorious in any election must count on the zone.
But as the election draws nearer, the leadership of the PDP decided to take a strategic move as a way to woo the people of the north for support before the polls by brokering a deal and understanding that would cede power to them easily.

The deal, according to THISDAY checks, was to ensure that power shift to the people of the zone in the next election cycle.
At a meeting held in Ilorin recently, the leadership of the PDP led by Saraki, in attendance with the royal fathers of the zone and Emir of Ilorin, Alhaji Ibrahim Sulu-Gambari, the PDP said the party’s governorship candidate, Atunwa if elected, would serve only one term of four years in office and the power will shift to Kwara North senatorial district come 2023 in the state.
The party also agreed to concede the position of Secretary to the State Government (SSG) and Speaker of the State House of Assembly to the zone if Atunwa wins his election.
The communique read by the Director General of Mandate 2019, Professor Suleiman Abubakar, stated: “The sole purpose of the meeting was for us to have an understanding on specific terms on issues bordering on power shift, cohesion, giving sense of belonging and inclusiveness to our people across all the three senatorial districts.
“The conclusion of the meeting is that there will be power shift to Kwara North in 2023. Also, the positions of Speaker of the Kwara State House of Assembly and Secretary to Kwara State Government have been zoned to Kwara North in the post-May 2019 government.

“The understanding has been committed to writing and signed by all key stakeholders present. Traditional rulers from Kwara North Senatorial District and Emir of Ilorin, Sulu-Gambari were consulted on the understanding and they gave their royal blessing to the terms and contents.
“In their speeches at the meeting, the traditional rulers expressed support for any move that will ensure equity, justice and unity among all the various zones in the state. They also noted that their decision to serve as witnesses is based on the need to ensure that political leaders honour and respect the contents of the understanding and work for peace and progress of the state before, during and after the general election.

“Also, in return, the people of Kwara North have agreed to deliver the bloc vote from the zone to the PDP in the general election. We believe this understanding aimed at re-enforcing the unity, harmony and even development of our dear state is definitely necessary for the continued progress of Kwara State now and in the future.”
Commending the pact with the people of the Kwara north ahead of 2019 and 2023 elections in, former top bureaucrats from Kwara north senatorial district have praised the understanding.
In a statement signed by Alhaji Dabarako Mohammed, a former Head of Service, on behalf of former top civilian servants and opinion leaders from the district, they described the arrangement as a positive move that would guarantee peace, unity, inclusivity, equity, even development and justice among the various zones in the state,
The leaders of thought noted that the people of Kwara north senatorial district had been yearning for solid representation in the post-2019 government in the state and that since the PDP had been thoughtful enough to offer them a plan, which recognises the importance of the zone in the political equation, then, the party should rest assured that it would have bloc votes from the zone at all levels in the coming elections.

“The PDP move shows its leaders are very thoughtful, calculating and honest to know that equity and justice are what can guarantee development, peace and unity. That plan has re-assured our people that they are appreciated and recognised as equal stakeholders in Kwara State. Our people will definitely reciprocate that insightful and foresighted gesture with overwhelming votes.
“It is now the duty of those of us who are opinion leaders to work with our traditional rulers, socio-cultural groups and other mobilisation agents to inform our people on the need to massively turn out during the elections and vote for the party that has demonstrated their love for us. And that is the PDP,” the leaders stated. The group added that they have no fear that the terms and content of the agreement would be respected and honoured as the signing was witnessed by traditional rulers from the North and Central Senatorial Districts and the fact that the PDP gubernatorial candidate has publicly acknowledged and expressed support for the understanding has given necessary assurances to the people about its feasibility.
“We call on our people to ignore the rantings and claims of those who think that the power shift understanding was a desperate move or that it came out of any coercion or intimidation. The PDP leaders voluntarily out of their own political sophistication, ingenuity and understanding of the politics of the state, made the plan and it is acceptable to us. We shall abide by it and make it work,” the group added.

But some elders from the zone under the aegis of Kwara North Elders Forum of the APC recently dissociated itself from the reported agreement with Saraki and PDP. The elders said the purported memorandum of understanding reached with Saraki, traditional rulers and stakeholders from the north was a charade.
Addressing reporters in Ilorin, the state capital, leader of the APC elders, Senator Ahmed Mohammed said the traditional rulers from the zone and the Emir of Ilorin, Sulu-Gambari were corralled to witness the alleged undertaking to give authenticity to the pact.
“The royal fathers were corralled in place as witnesses to the solemn undertaking being executed in recognition of the perceived monumental injustice suffered in the last 16 years of our political inter-relationship with the Saraki dynasty. For the avoidance of doubt, we hereby wish to state categorically that contrary to the impression that the agreement is meant to create in the public mind, the vast majority of our people are more than ever before united in purposeful determination, in concert with others across the state, to do away with bad leadership that the PDP has offered over the years.”

Evidently, the issue of power shift to the northern part of the state will continue to generate a lot of concerns, but the quick pact signed recently with the people of the zone by the PDP leaders might have provided some respite, thus presenting a greater platform for the PDP to address the feelings of the people of the zone as well as establishing the chance for the PDP to move ahead during the poll.
As it currently stands, the challenge has been thrown back at the APC to come up with a better deal for the people of Kwara north in its bid to evenly square up with the PDP.